With things in wearables moving at a reasonable pace, more and more companies have started to launch their own devices that are aimed to facilitate you in managing your daily environment with the help of general tech. Among these manufacturers is Sony, who is well known throughout the world for its gadgets. Sony has announced today its reply to Google's Google Glass, which allows you to carry out several tasks such as snapping photographs and getting directions simply through voice commands and eye gestures. 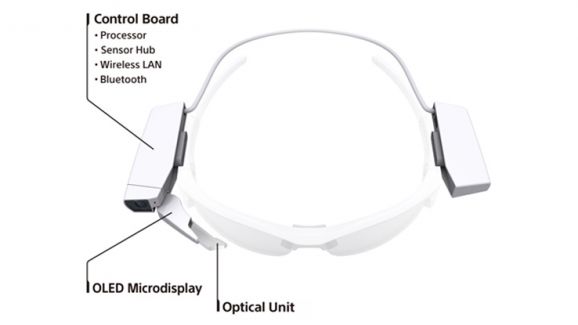 Sony Announces The Single Lens Module - That Can Be Used With Any Pair Of Glasses.

With this year coming to an end, Sony seems to have great plans for CES in January. The manufacturer will be unveiling what it has dubbed as the 'Single Lens Module' - or in layman terms - Sony's competition for Google Glass. But that's as far the similarities between the two go. Sony's approach for the Single Lens Module is vastly different from Google's Google Glass. While Google Glass is intended as a standalone product, the Sony Single Lens Module will be able to work with any pair of ordinary glasses - be they sunglasses or reading glasses.

The Single Lens Module uses a high-resolution OLED Display and a Micro Optical Unit to beam images on to your glasses. The resolution for images displayed on your glasses will be 600 x 400, which should be quite decent. As far as specs for Sony's Single Lens Module go, the device will come with an ARM Cortex-A7 processor, WLAN, Bluetooth and a battery of 400 mAh. Sounds very interesting indeed. All eyes peeled for the Consumer Electronics Show to be held in January, where we can take a full look at the Single Lens Module and a variety of other devices. Stay put, we'll keep you updated.