Japanese consumer electronics manufacturer and game developer Sony Corporation released its earnings report for the first quarter of the fiscal year 2020 earlier today in Japan. The company, which all set to upgrade the iconic PlayStation gaming console lineup later this year despite the ongoing pandemic, has now revealed key statistics for its current PlayStation 4 console and the accompanying PlayStation®Plus gaming subscription service.

Commenting on the impact of the current pandemic-induced economic disruption on the PlayStation 4 production, Sony's management informed investors that production was slightly affected due to problems in securing the necessary components from the supply chain. The impact of this slowdown on the console's shipments is difficult to determine only by looking at the numbers provided by Sony – especially since, and thankfully for the company, it comes at a time when the console is at the absolute end of its manufacturing cycle.

Sony confirmed that the PlayStation 4 had witnessed another year-over-year drop in its sales in the first quarter of 2020, but the company's data also reveals that the console's unit shipments increased quarter-over-quarter (or sequentially) in Q1.

While Sony shipped 1.4 million PlayStation 4 units during 4Q 2019 (the quarter ending in March), in its previous quarter the company witnessed 1.9 million shipments - which marked for a seemingly remarkable 35% sequential growth. However, when analyzing historic trends, the PlayStation 4 has generally grown unit shipments sequentially during the first quarter, with the console growing shipments by 28% in the first quarter of fiscal 2018 and by 23% during the previous fiscal year's first quarter.

A 35% sequential growth still outstrips previous Q1 percentages, and yet, the nature of this growth is uncertain as the company also announced that it has reclassified PlayStation sales in its latest earnings release. This reclassification takes into account devices returned to Sony and refurbished devices sold by the company, with a cursory look at the data revealing that the figures for the third and fourth quarters of the fiscal year 2019 are the ones that see their figures change by a slight margin. Sony's PlayStation 4 shipments during Q4 FY2019 were also lower than prior year quarters, so naturally, the latest sequential growth rate is higher. 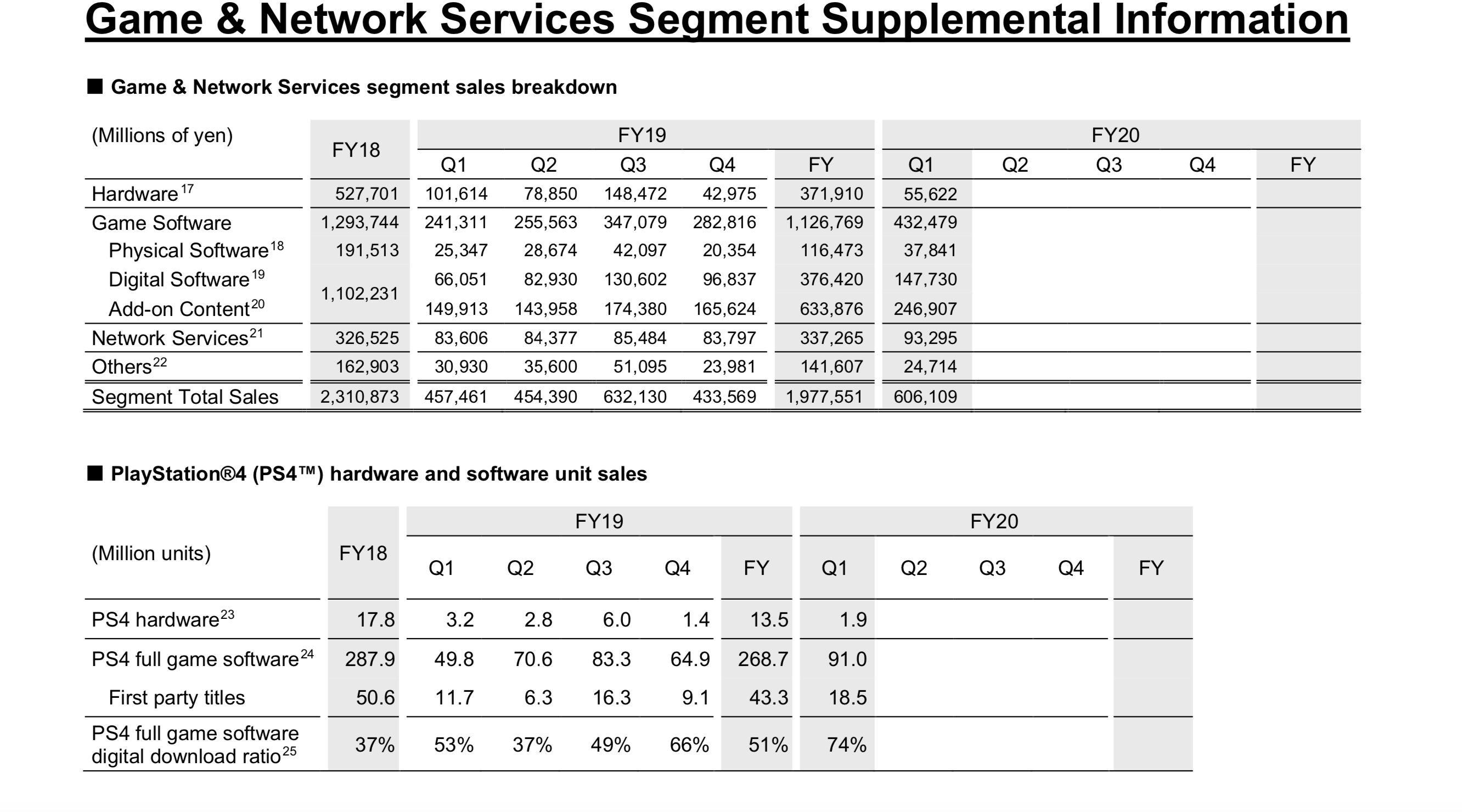 PlayStation Plus exhibited more sequential and year-over-year growths during the quarter with the number of subscribers for the service sitting in at roughly 45 million and the number reflecting a two-year high. Sony has now also started to reveal monthly active PlayStation Plus users, and data from the company's first quarter of the fiscal year 2020 (Q1 FY2020), which also marks the first time that this figure is being revealed, shows that during the quarter the service's parent entity PlayStation Network (PSN) had 113 million monthly active users.

In the Supplemental Information document that accompanies today's earnings release, Sony's also absolves itself from some responsibility for the accuracy of the PlayStation Plus monthly active user count. The company states that the figure is simply an estimate that looks at the total number of unique accounts using PlayStation Network games or services, and that this estimate is calculated at the last month of each quarter. Sony also cautions that this figure can be updated in the future since it is dependant on the company's own research.

Finally, the company also commented on the current status of the upcoming PlayStation 5. According to Sony, it faced constraints from remote work and suspension of international air travel - constraints that are similar to others such as Apple Inc have faced. However, the console is scheduled to launch during the holiday season this year, with the company providing no other specifics. Sony did however confirm that its and its partners' studios have not witnessed any delays to their game development schedules from the coronavirus.