During MWC 2016, Sony announced an array of smartphones, and now, the Japanese firm showcased its latest prototype; a projector with its own magic. 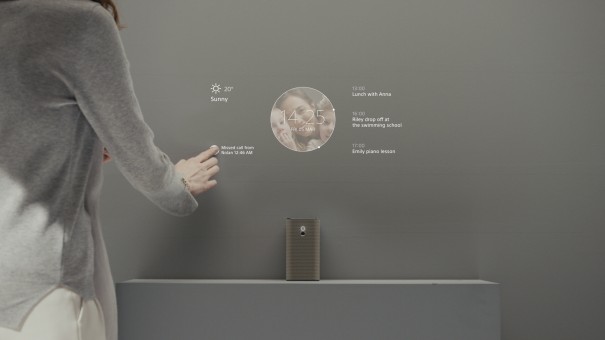 Prototype Sony Projector Can Transform Your Flat Surface Into A Touchscreen – Will It Be Commercialized Though?

Sony has an R&D facility called Future Lab, and that is the place where the company’s experts gather together to work on products that will most definitely change the way we interact with everyday objects.  It might just be a clever name for its science division, but showing what the company’s latest concept is capable of doing, we are thoroughly impressed. You have to keep in mind that whatever surface you place the projector on, it will turn into a touchscreen and will respond to your taps.

What is even more interesting to see is that this prototype also has a depth sensor. The depth sensor is present so that the projector will be able to view what has been placed on the table, and will provide you its basic information ranging from weight to dimensions. According to The Verge, who had a jolly of a good time with the concept, placing objects like cups allowed the projector determine how deep it was.

Before we forget, when you place textbooks or any other book that features nothing but text, it will transform that text into an interactive version of the story, so individuals who always found images lacking in books boring some will definitely have an excuse to indulge into novels and other genres. However, before you guys start getting thoroughly excited about this, you have to keep in mind that it is just a concept from Sony.

Irrespective of how impressively it performs, the Japanese tech giant has made absolutely no indication as to when it is going to be announced or the slightest idea of how much this thing could cost. That is actually a scary thought, because we have seen a ton concepts on the web and as impressive as they may be, we never saw an actual product reach to the market, and we are worried that Sony’s projector might go through the same fate.

Another thing that Sony has to worry about is has the company even decided who it is going to be targeting, because a great degree of funds and effort took into creating it, and that means it will not have a cheap price tag. We sincerely hope that Sony has some good news for us down the road. What did you guys think of the new concept; let us know your thoughts right away.