I have heard some pretty preposterous and outrageous names in my time of reporting names, so far this will have to be the one I will tell friends and family about. While Agent's trademark got a refresh it appears that Sony decided to kill two birds with one stone and get a new trademark.

Sony may have filed a a new trademark for what could be ... anything, my guess would point towards , , , , . While we don't actually know anything about the IP and Google doesn't bring any pleasant results, we can only speculate that Sony has added another feather in their cap for the unveiling of E3.

While the name is somewhat suggestive and EASY to mispronounce, I am very curious on what this IP could finally become, I am hoping that it is one of the first VR augmented games that will make use of the controllers, PS eye or Project Morpheus.

While we ponder over what the name could mean, the meaning of the name in Urban Dictionary will definitely give you a good giggle, but on a serious note Sony US has also published a smartphone app called Sorcerer's Odyssey for the iOS and a social game called "Forsaken Planet" for smartphones.

Its worth noting as well that Sony DADC (Digital Audio Disc Corporation) can also manage digital licenses. Meaning if they wish to make this into a full fledged game, then they have the complete sovereignty to do so and what they do with the game is open for guessing.

You can see the trademark listing Here 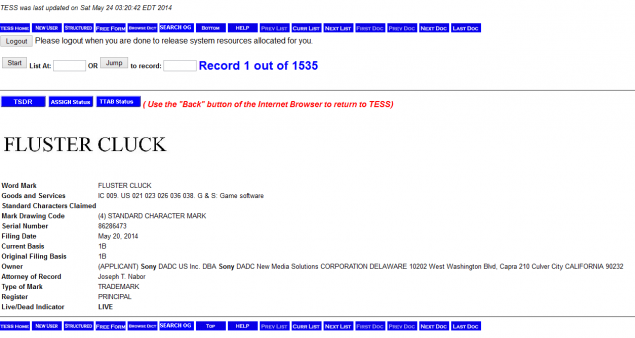 If Sony and Sony DADC had the objective of baffling the whole lot of us, then I guess they can say their mission was proudly accomplished because I am at my wits end trying to figure out what this potential IP could be and who could be developing it?