Sony has going after GoPro with its own Action Cams and has produced some serious competition. Now Sony has announced that it will be releasing the latest version of its 4K Action Cam called X3000R. The new model will cost you $400 to buy and has got a great number of new features, making it worth a buy. The new features are, face detection, optical image stabilization and a new and improved menu that will make things easier for you. The new menu system is the same one we saw on the smaller Sony Action Cam announced at this year’s CES.  Apart from the sleek new X3000R, Sony also announced another model, the AS300R. This is a relatively cheaper model of the Action Cam with a retail price of $300. Both models essentially have the same features except that the AS300R can only shoot videos till 1080p.

Both these models will be up for grabs later this month

Digital stabilization has been a part of Sony Action Cams for quite some time now and it’s really fascinating for all its users to see something new coming their way i.e. the optical or mechanical image stabilization. Digital Stabilization produced results that were not always up the mark. As it is software based it used to smooth the footage by cropping the image and then adjusting for the vibrations using the excess space. 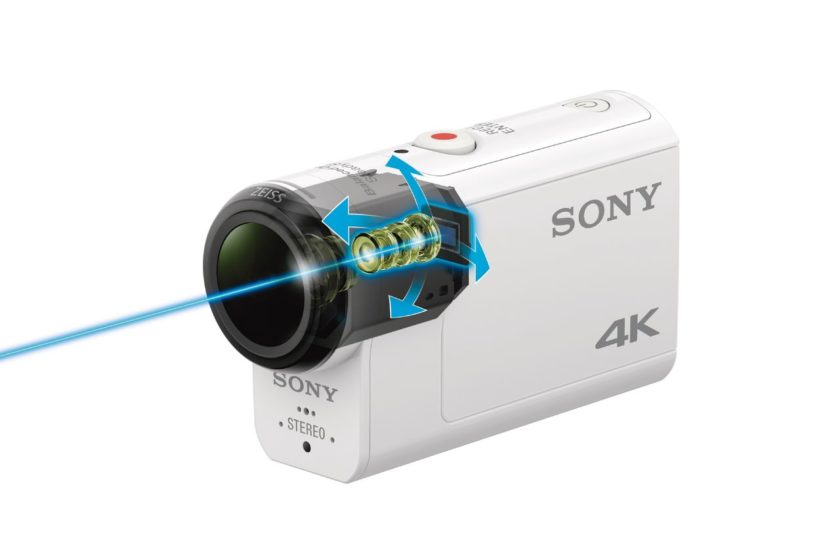 On the other hand, mechanical stabilization involves a mechanism of physically moving the elementary parts of the lens as well as the image sensors. The movement results in a better image than the digital cropping mechanism. Now that every action camera is able to shoot at 4K quality, the only distinguishing feature left will be image stabilization which Sony has rightly incorporated into the new models.

Adding to the new features Sony managed to add into this new model, it has also built a new lens specifically for its Action Cams. This makes the image results as smooth as possible in contrast to the previously distorted camera images. The Action Cams will also have a new version of Sony’s Exmor R CMOS image sensor. The new menu system included in the Action Cams is also very user-friendly and easy to use. This will not only allow the users to see more information at a single glance but will also allow them to get to the settings and modes more quickly.

Be sure to grab one of these models when they are out and do let us know what you think about them in the comments below.