Sony has answered Microsoft's acquisition of Activision Blizzard with today's announcement that it will acquire Bungie for $3.6 billion, as reported by GamesIndustry.biz. Bungie will become a so-called independent subsidiary of Sony Interactive Entertainment. The studio will reportedly remain multiplatform, though, keeping the ability to self-publish and reach players wherever they may be.

We've had a strong partnership with Bungie since the inception of the Destiny franchise, and I couldn't be more thrilled to officially welcome the studio to the PlayStation family. This is an important step in our strategy to expand the reach of PlayStation to a much wider audience. We understand how vital Bungie's community is to the studio and look forward to supporting them as they remain independent and continue to grow. Like Bungie, our community is core to PlayStation's DNA, and our shared passion for the gamer and building the best place to play will now evolve even further.

For his part, Bungie CEO and chairman Pete Parsons added:

Both Bungie and SIE believe that game worlds are only the beginning of what our IP will become. Our original universes have immense potential and, with SIE's support, we will propel Bungie into becoming a global multimedia entertainment company dedicated to delivering on our creative vision.

Parsons' statement makes it clear that the deal with Sony wasn't just about gaming. After all, Bungie did announce a strong push into TV and film for its IPs last year, and Sony does appear to be the best partner for that purpose. This year alone, we'll see Naughty Dog's two most prized IPs adapted to film (Uncharted, due in a couple of weeks) and TV (The Last of Us, distributed via HBO Max), though that's just the tip of the iceberg. PlayStation Productions was founded specifically to adapt Sony IPs to the TV and film formats and it's fair to assume the same will happen with Bungie's intellectual properties.

As a reminder, Bungie is working on a new IP after receiving substantial funding (around $100 million) from NetEase. Following this news, the game developer posted a brief FAQ to confirm to Destiny 2 fans that none of its plans will change. 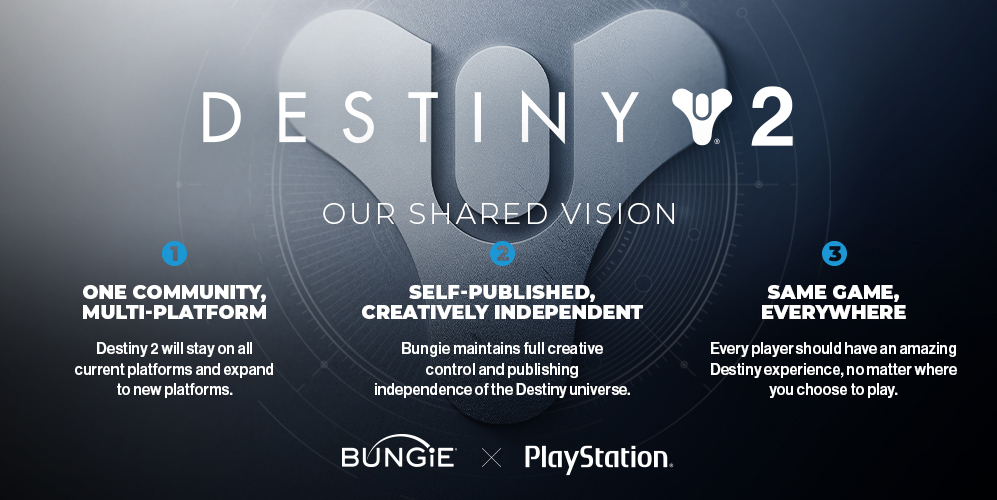 Q. As a Destiny 2 player, does Bungie becoming part of PlayStation have any immediate impact on how I play and experience Destiny 2? ​
No. Our commitment to Destiny 2 as a multi-platform game with full Cross Play remains unchanged.   ​
We want you to play The Witch Queen on February 22, 2022, on the platform of YOUR choice. ​
Q. Will the Destiny 2 experience on non-PlayStation platforms be impacted by Bungie becoming part of PlayStation? ​
No. We want to maintain the same great experience you already have on your platform of choice. ​
Q. Will any announced seasons, events, packs, or expansions be changed or impacted by Bungie becoming part of PlayStation? ​
No. Bungie retains full creative independence for our games and our community. Our plans for the Light and Dark Saga are unchanged, all the way through The Final Shape in 2024. ​
Q. Will Destiny 2: The Witch Queen include any platform exclusives? ​
No. The Witch Queen will not contain any platform exclusives. Every player should have an amazing Destiny experience, no matter where you choose to play ​
Q. Will cross platform features, like Cross Save, Cross Play, the Destiny 2 Companion App, or third-party apps like Destiny Item Manager (DIM) be changed or removed? ​
No. Bungie’s commitment to cross-platform play and social features remains unchanged. We believe games are best shared with friends, wherever they choose to play, and will continue to invest in new features and platforms. ​
Q. Bungie has future games in development, will they now become PlayStation exclusives? ​
No. We want the worlds we are creating to extend to anywhere people play games. We will continue to be self-published, creatively independent, and we will continue to drive one, unified Bungie community. ​
Q. I play Destiny on Steam, Xbox, or Stadia – will my platform still be supported? ​
Yes.

Needless to say, it is a bit ironic that the studio originally responsible for the creation of Xbox's biggest IP to date, Halo, has now joined PlayStation. Then again, it's been over twenty years since that happened, and Bungie did go through the partnership with Activision first.

Is this the best move Sony could have done in response to Microsoft's huge announcement, though? Feel free to discuss that in the comments section.