These Snowballs Just Appeared One Night on the Siberian Shore! 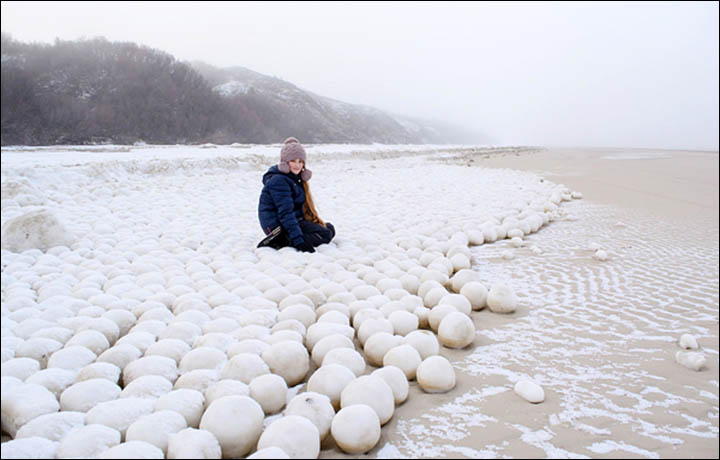 Imagine waking up to a beautiful cold morning. Imagine yourself zipping up that jacket to take a nice morning walk on the Siberian beach. And then, finding yourself in the midst of thousands of snowballs on the shore, all put so immaculately as if an artist has been playing with the snow.

This is not just a story to imagine. It just so happens that Siberia has been fortunate enough to experience such a mystic event. Just last week, the residents of Nyda were subjected to such a sight after a heavy storm. These snowballs had lined up the shore so perfectly, that it almost seemed like someone had placed them there.

These snowballs ranged in sizes from about table-tennis balls to volleyballs. Their shape was so refined that they almost seemed sculpted by hand. Alas, the fantasy was short-lived when science stepped into the picture and explained this mystic phenomenon.

How are these snowballs formed?

Apparently, such snowballs can be formed after a heavy snowfall is followed up by thawing and then freezing again, as the cycle then repeats. How did they get to be so refined in shape? The ocean tides played a major role in smoothing out these snowballs with their rhythmic motions. As a rule, grease ice forms first, which is slush. Then a combination of the action of the wind, the outlines of the coastline, and the temperature may lead to the formation of such balls, Sergey Lisenkov, a spokesperson for the Arctic and the Antarctic Research Institute (AARI) said.

Even though this was a first-time phenomenon Nyda experienced, it has been seen before from Sweden to Michigan’s Sleeping Bear Dunes National Lakeshore in 2013. Michigan scientists theorized the same thing, that they had been formed due to the wave motions of the lake.

No scientific name has been given to this phenomenon yet, but the internet is calling “lollies” and “snowman eggs”. These snowballs are about two weeks old at this point, but they are still proving to be an attraction for the locals, who visit the shore to have pictures taken with these fuzzy orbs.