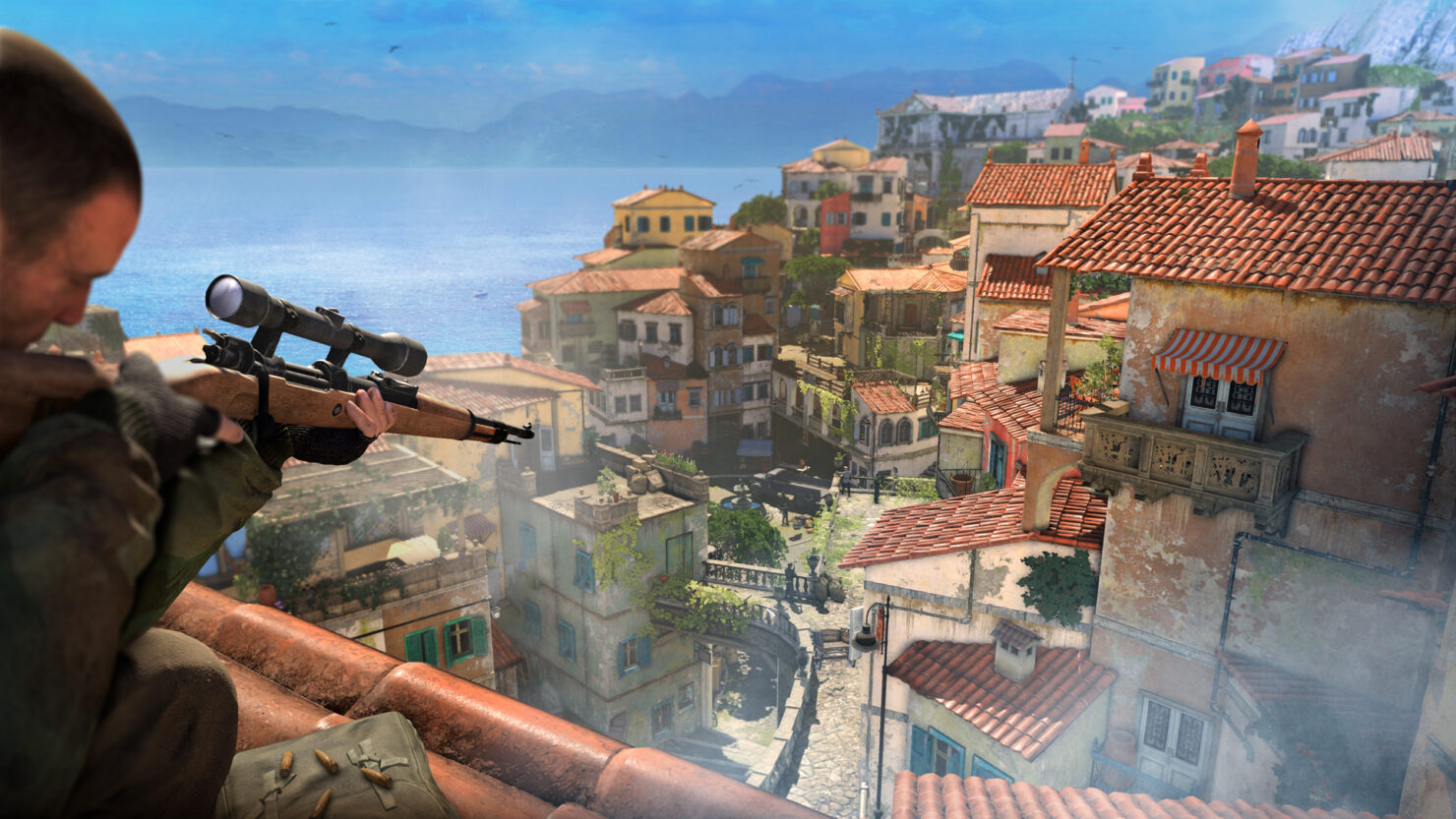 Have you ever performed a sick 360 no-scope? Needless to say the feeling of elation you get from pulling off such a difficult (and seemingly random) shot is beautiful, but fleeting. Once your kill is counted and the corpse has been tea-bagged, it’s on to the next – no true, visceral feeling of satisfaction, no tales to regale your friends with. That’s where a game like Sniper Elite 4 comes in – each shot carefully measured, painstakingly thought out and focused. This is where sniping comes alive.

The game is the fourth main installment in the series. Anyone who’s played a Sniper Elite title before will know roughly how this plays out – your specialist sniper protagonist is on his own, and must use his best stealth and survival abilities. In true Sniper style, this includes scouting out bases, hiding in bushes and shooting bullets at heads – or any other body parts you wish to blow apart. As usual, the franchise trademark X-Ray kill cam system kicks in to show such internal body parts being destroyed in the most gruesome ways conceivable by the human mind, but this time the system has been expanded to include stealth/melee kills and shrapnel kills too.

If you’re a Sniper Elite fan, things haven’t changed too much on the surface. You still have the same methods of hiding from AI enemies, blowing apart heads and setting up tricky traps. Unlike in older games, AIs and their actions will have greater repercussions.

AI characters will hold key items, hold specific positions, and seek out the player more effectively than ever. Once one of the corpses I’d left lying around had been discovered, I found myself on the run, hiding behind trees and in bushes until the heat died down – or I could tactically kill a few of them off, perhaps with a ledge grab, which is part of the expanded movement system (the protagonist has learned how to climb now).

There’s elements that hark back to Goldeneye or Perfect Dark – optional tasks or mere curiosities you can expand upon. Sure, you can hide in a bush, sneak past tanks, never deal with them, or you could lurk nearby, place a heavy duty mine in the vehicles’ path and then move in for the kill once detonated.

But the options keep coming – even corpses can be used not only as distractions, but elaborate traps. Booby trap a body and rig it to explode, or even just use it as cover while sneaking up behind an unguarded enemy. Stealth options now include even the traditional whistle to attract guards, while during night missions shooting lights (with a silenced gun, of course) will help conceal your position.

Rebellion is making a far larger game this time around. The smallest map has been estimated to be about three times the size of the largest in Sniper Elite 3, which means that players will have access to many more paths for their sneaky infiltrations.

Of course, before doing that you'll want to carefully scout the enemies from afar. The best way of doing that is by using the binoculars, which are now even more useful than in past iterations. They won't just show where your foes are, but also which weapons they are carrying and their rank, too; this is important because killing an officer as soon as possible is advisable, since it will break the troops' morale and make them more likely to flee.

Then there's the significantly improved graphics, as testified by images and videos. The developer is still using the Asura engine, but dropping support for last generation hardware (PlayStation 3 and Xbox 360) allowed for several enhancements across the board. The setting is also lovely - 1943 Italy, with locations ranging from stunning Mediterranean coastal villages to mountain monasteries inspired by the likes of Monte Cassino.

Sniper Elite 4 is building upon what made the previous games so much fun, and with a wealth of new options and smarter enemies than ever, the challenge – and reward – has never been better. Multiplayer is also fully supported, from the campaign (playable by two in co-op mode) to dedicated cooperative and versus modes.

If you fancy yourself a stealthy sniping ninja, then Sniper Elite 4 is not one to miss, though it will be a tough competition with CI Games' Sniper: Ghost Warrior 3: the former is set to launch on February 14th, 2017, while the latter will be out about two weeks earlier than that. Both will be released for PC, PlayStation 4 and Xbox One.

In the meantime, you can check the latest Sniper Elite 4 gameplay footage from EGX 2016 below.