Hear Hear! The Snapdragon 820 To Be Unveiled On August 11th

When it comes to mobile chipsets, Qualcomm is king. Or rather, it was king last year, before Samsung entered the race fully with the Exynos 7420, manufactured on the 14 nm FinFET and widely heralded to be the top SoC in the mobile segment right now. And the Snapdragon 810, claimed before its launch to be the next big thing in mobile SoCs failed to live up to expectations rather miserably. So Qualcomm's seemingly moving fast now folks or at least according to the Chinese media. 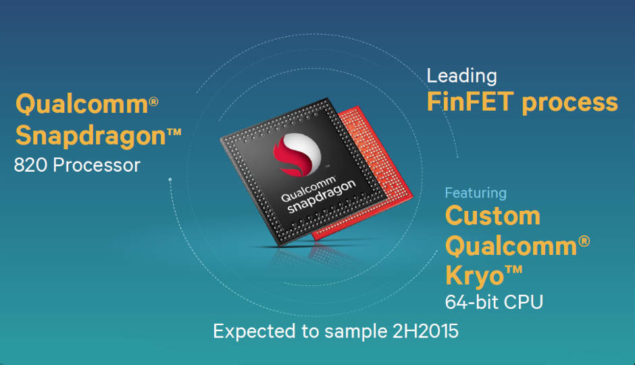 Qualcomm's Snapdragon 810 Coming In Exactly A Week In LA

While its been rumored for quite a while that Qualcomm's moving quite well when it comes to the Snapdragon 820, with the manufacturer already having sent samples to various manufacturers. In fact, we've also been hearing rumors that Samsung just might be considering the reintroduction of the Snapdragon series on the next Galaxy lineup, as Samsung itself has started testing the SoC on its devices.

Now, some fresh news out of China is suggesting that Qualcomm's ready for the next public phase in the Snapdragon, as the manufacturer is allegedly planning an August 11 launch for the processor. Qualcomm's reportedly expected to go all out on the Snapdragon, with the processor to allegedly feature the manufacturer's own custom 'Kryo' cores, rather than ARM's Cortex CPUs, as has always been the case for its chipsets.

On the GPU side of things, the next Snapdragon is expected to feature the Adreno 530, the next in generation of the US chipmaking giant's mobile GPUs. When it comes to GPUs, Qualcomm's got quite a strong game when compared to others, especially the Mali series generally featured on Samsung's Exynos lineup. And if Qualcomm can funnel the same amount of high quality into its Quad Kryo cores for the Snapdragon 820, then we'll see a very strong return by it indeed. All eyes on August 11 now, and on Qualcomm to see whether there's any grit to this talk either. Stay tuned and let us know what you think in the comments section below.