Snapchat is on the verge to achieve dazzling new heights nearly with a $19 Billion equity so far. However, there seems to be another interesting opportunity according to Evan Spiegel, CEO of Snapchat. The CEO has hinted that he wants to emphasize more on the music category. 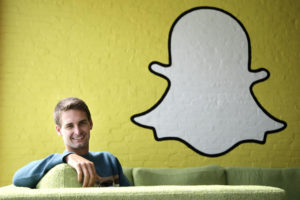 Evan Spiegel said at the backstage interview at USC that music has the same essence today as communication had at the start of Snapchat. The Snapchat executive portrayed his words in favor of music as being, ''the highest frequency behavior on your phone and so that in our view, makes it a really interesting opportunity and it’s something that we are thinking about."

Since Snapchat has been famed for its platform that enables users to communicate as well as send pictures which delete themselves after 10 seconds after reviewed by the receiver. it has been a while since Evan is contemplating to add Music features to Snapchat. I'm sure all of you remember the Sony's online files being hacked and one of the memo that was leaked said,  "He (Evan) thinks every music service in the market is shit and he wants to be a curator. He doesn’t want to build a music service but he would like to have a record label so he could focus on the artists that he wants to use the platform to promote."

Snapchat is trying on a lot of dresses for its app like the Discoverer feature which works quite well. The Discoverer feature has the function of content provision from various brands like ESPN, CNN, Yahoo,Comedy Central and People. Snapchat also has a launch partner for Discoverer, Warner Music which will prove to be a beneficial move. Other than media from various media names, short stories are put together by different publishers, artists and Snapchat's own personal editing staff. Monetizing the app via a bid which will be sold to advertising agencies for the Discover feature seems like a pretty hefty plan to keep the cash running. So Snapchat is technically one step ahead from other internet messaging applications and is moving forward with quite a force. This is it for now, for more details, leaks and rumors, do stay tuned. Plus, do share with us how you feel about music in your favorite IM app.

All The OnePlus 5T Official Images That You’d Want Are Here; 15+ Pictures Show All The Details, From All The Angles