SMITE is Celebrating a First Anniversary With Goodies

The fans of SMITE will certainly appreciate this little gem (pun intended). Hi-Rez Studios are going to be celebrating their one -year anniversary with a nice sale, running through this Friday, March 27th. 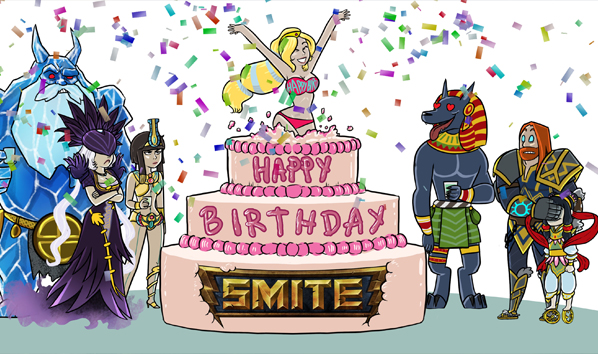 SMITE sale in honor of their first anniversary from now until Friday, March 27th.

SMITE, a third person MOBA, has apparently been quite the hit in their first year. So to celebrate the smashing success that they've become, they're conducting quite the sale for the next few days.

Also part of their birthday festivities is a weekend where all SMITE Gods free to use with worshipers earned at twice the normal rate. This will kick-off starting March 27th and will run until the 29th.

There is still no hard concrete news as to when SMITE will be making its official released appearance on the Xbox One, though it is a certainty that all your progress will be transferable if you decide to start playing on the Xbox One as well. The other neat thing, though? It'll be free on the Xbox One too.

In this sale you'll be able to get some pre-launch skins for 50% off, grab the Ultimate God Pack for $19.99 and even get an extra dose of gems added to your gems purchase. Below are the details straight from their site concerning all the items they have for sale.

Purchasing gem bundles in the below increments will grant bonus gems!

The Ultimate God Pack is $19.99. Own every god in the game and every future god!

The following Skins are 50% off!