"Dragonborn" is the new name of the upcoming DLC that was allegedly uncovered in a PC update, While the year has gone by and a new one is slowly dawning upon us this doesn't mean that the AAA title games of yesteryear will be easily forgotten! Just because people are now playing or waiting for new titles doesn't mean that legendary games like Elder Scrolls V : Skyrim will go down easily! If anything the game is about to get even more spectacular as there are now rumors of Dragons Mounts being found in a PC Update of the game! Are you ready for the excitement? If you thought Hearthfire and Dawnguard were good wait till you get a look of what "Dragonborn" has to offer! 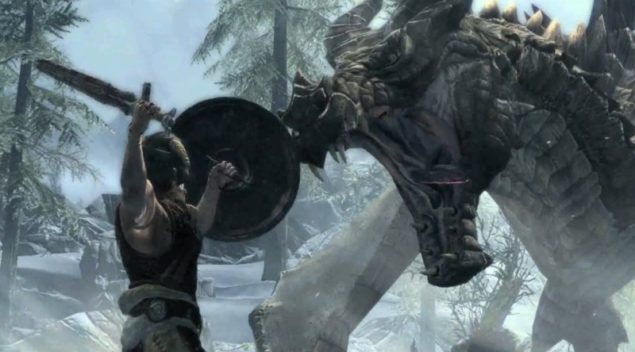 Dragon Mounts, Morrowind, and tons more quests. Your time in Skyrim is far from over with the eventual arrival of "Dragonborn"!

While Dawnguard and Hearthfire have given gamers plenty of reason to hold on to their copies of Elder Scrolls V : Skyrim there is about to be an even better reason to hold on to it as the hidden files in an update suggest the game might just get a major DLC which might even bring huge changes to the game such as dragon mounts, so far the known name for the DLC is "Dragonborn" but that of course is still a question of whether or not the DLC will be confirmed by the developers.

You can go Here and partake in the discussion of the DLC and the files and if you can help in further dissecting the files but for now all that is known is that the DLC will include dragon mounts and even take us back to Morrowind as the files also mention Lake Solsthiem and Vvardenfell and here are some even more details: (All of the below has been taken from the source)

Quest markers for Solstheim, Telvanni, Castle Karstaag, Raven Rock and Miraak Temple have been discovered, alongside entries for what appear to be four new armour varieties - Bonemold, Chitin, Nordic and Stalhrim. Finally, there are files for the aforesaid dragon-riding animations. Looks like you'll be casting spells from dragon-back, too. Squee.

This seems to be a very significant DLC and will definitely be a red letter day for many fans once the DLC is officially announced and given a price tag!