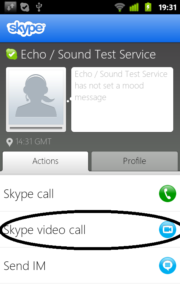 No longer will you have to look at your iOS brethren in envy when he's on a video call using Skype. The app has just gotten an update and now a select few Android handsets will be able to make and receive video calls using Skype. The following handsets are supported initially:

No idea what's special about these four but at least it's a start. I'm sure more handsets will follow. Those which are not on the list would at least see a UI overhaul so all is not lost.