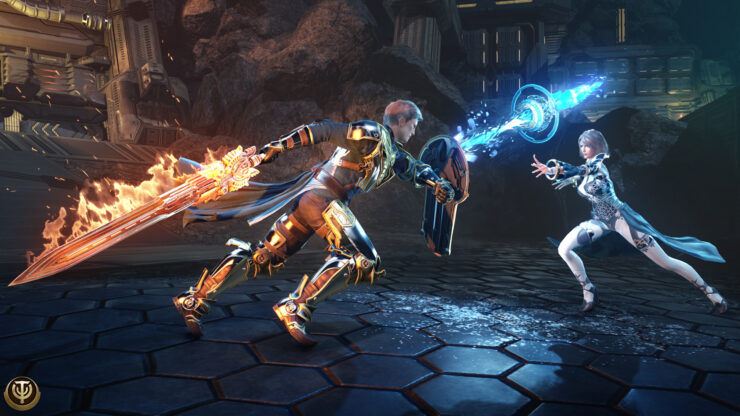 My.com recently launched its action MMORPG, Skyforge, on PlayStation 4. The free-to-play (F2P) game became available in the latter half of 2015 on PC and now, even console gamers can try it by buying an Early Adopter Pack (granting immediate access) or just waiting April 11th, when Skyforge will be available to everyone.

The game, set in a Sci-Fantasy world where players start as immortals and graduate into gods, was developed by the Allods Team (Allods Online, Cloud Pirates) in collaboration with Obsidian Entertainment. We reached out to Project Manager Alexander Shimov to talk about this console port as well as the future plans the studio has for the game.

How much effort did it take to port the game over to Sony's PlayStation 4? What was the biggest challenge you had to face?

If we compare the porting vs developing a new project from scratch, porting sound certainly easier than developing a new project. At the same time, our team of engineers was faced with a serious challenge. PC version of Skyforge uses an internal proprietary engine designed specifically for the needs of the Windows version of Skyforge. This engine is well designed for MMO games on Windows PC, but to make it a truly cross-platform MMO engine with support for all current-generation consoles is quite a complex engineering task. Most changes we made in the code of the game client, about a dozen software engineers worked full-time for about 10 months to accomplish this.
Also, we made very serious changes in the UI and HUD of the game and adapt the UI and gameplay and control from a gamepad. In general, I can say that we started to think about porting the Skyforge to Playstation 4 in early 2016 and at the end of 2016, we ran our first closed test for the PS4 version of our game. So, it took us about a year to make a port to Sony's PlayStation 4 from PC.

Will the graphics quality take a hit compared to the PC version of the game? What's your target for frame rate and resolution on the base PS4?

Fortunately, the GPU on the Playstation 4 is much more powerful than our target GPU on a PC. This has allowed us to add new graphic features and enchantments to the PS4 version of the game. First of all, we added a new anti-aliasing solution called "Temporal Anti-Aliasing". This greatly improved
the overall picture quality of the game. Then we added support for "Parallax Occlusion Mapping" for terrain and geometry that added more depth and details of the game world. In addition, we have greatly improved support for reflections in our engine and added support for detail textures for the
characters and game objects. So, yes, I can say that the PS4 version of the game got improved graphics compared to the PC version of the game. Our target frame rate now is over 30 frames per second in true 1080p without any upscaling.

Will PS4 Pro users get an enhanced experience while playing Skyforge? If so, what kind of graphics improvements are you working on?

We are working on Pro features like 4K and HDR support.

As far as we understand, there will be no cross-platform play or even character transfer between PC and PlayStation 4. Can you tell us why? Is there a chance you might revisit this decision in the feature, at least for cross-play?

It's unlikely that we will support cross-play or character transfers in future. There are a lot of social features that depend on the platform and we wanted to handle our new audience as a fully new one and give them a fresh experience.

Skyforge fans would like to know more about your plans for the upcoming updates to the game. Is there any major in-development feature or content addition you can talk about? Also, after Ascension are you planning to release any more expansions?

Yes, we definitely plan to release more major expansions. We've just released a completely new zone on PC servers that will be available later on PS4.  The game on console benefits from all content we made before, but there are a lot of new features to come in the future.