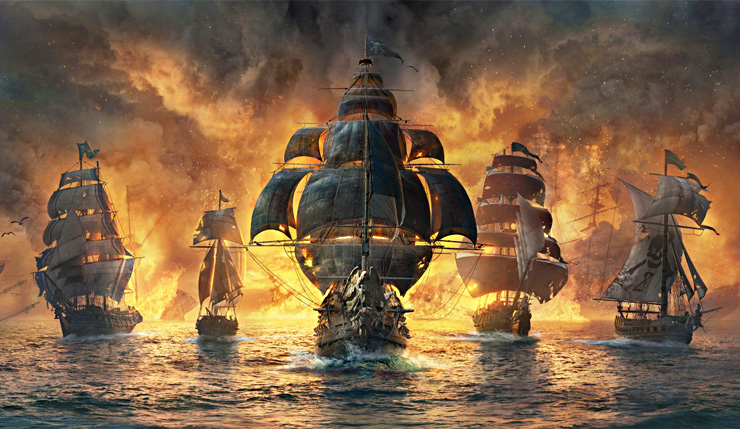 Roll up the Jolly Roger and put down that grog, because Ubisoft’s multiplayer pirate adventure Skull and Bones has been delayed. Ubisoft revealed the unfortunate news as part of their FY 2018 financial results.

“In line with previous practices and in view of the acceleration of our digital transformation, growth in back-catalog sales, and excellent momentum of recent releases, Ubisoft has decided to give itself more time to develop Skull and Bones to offer players an even more engaging experience. Skull and Bones is now scheduled for release in 2019-20.”

Before delaying Skull and Bones, Ubisoft was planning to sell 23 million games during the FY 2019 (which runs from April 1, 2018 to March 31, 2019). Now they’re only planning to sell 19 million games, meaning they were expecting Skull and Bones to move at least 4 million units. Pretty lofty expectations for a brand-new franchise, but hey, pirates know how to bring in the booty.

For those who haven’t been keeping up, here’s what Skull and Bones is all about:

It’s the Golden Age of Pirates. Renegade captains command the most powerful weapons on Earth,  warships. You are an upstart pirate captain who refused the King's pardon and sailed from the Caribbean to the Indian Ocean, an untamed frontier full of lavish riches. However, these waters are also a battleground where far-reaching colonial empires, powerful trading corporations, and ruthless pirate gangs ferociously clash. In order to survive, you will have to build a lethal fleet, prey upon lucrative trade routes, and ally with other pirates to join the endless struggle for supremacy.

Choose your captain, recruit your crew, and build deadly ships.

Enter the Disputed Waters and fight for supremacy in a variety of game modes.

A shared open world that reacts as you plunder rich trade routes.

Use your weapons, spyglass, and even the wind to stalk and destroy your prey.

Raid the Hunting Grounds alone or group with other plays to hunt larger prey.

What are your thoughts on the Skull and Bones delay? I think its probably for the best. Early trailers looked a tad generic, so hopefully they use the extra time to add some more variety and personality. One thing’s for sure -- the makers of Sea of Thieves are breathing a sigh of relief.

Skull and Bones is scheduled to set sail on PC, Xbox One, and PS4.