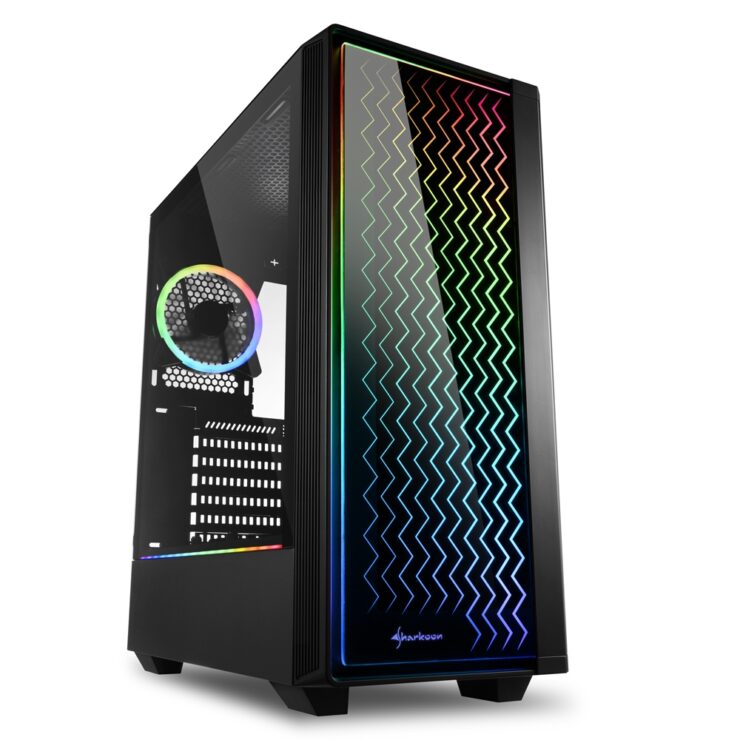 Sharkoon has announced the RGB LIT series of PC cases including the RGB LIT 100 and the RGB LIT 200 cases. Both of these are mid-tower cases that offer a tempered glass side and front panel, an RGB fan located in the back, and an LED strip which is located at the bottom of the glass panel. The main difference between the two cases is the design located on the front, the RGB LIT 100 has a circuit-board pattern while the RGB LIT 200 has a design of waves going down the case.

Sharkoon has announced the RGB LIT series of PC cases!

The airflow of both cases are identical as they are built from the same chassis, behind the front panel of each fan is a 120 mm fan, which pulls in the cool air which then is pulled throughout the case by the second fan located in the rear of the case as an exhaust.

In addition to the two pre-installed fans, this case offers the ability to install up to four additional fans. Two can be installed in the front and two more to be located on the top of the case, If you want to install liquid-cooling instead of using air cooling these cases have more than enough room to do so. In the front, a 6.4 cm thick radiator including fans are able to be installed along with the top offering 5.5 cm of space is available.

The design of this case is amazing, offering an elegant and impressive appearance. Along with the tempered glass panel, this case offers features like a power supply tunnel, multiple several cable pass-throughs and dust filters on each air intake which ensures that little-to-no dust will hurt the appearance of this case.

This case comes with two RGB fans, and LED RGB strips on the bottom to further accent the hardware installed in this case. This case is able to install a graphics card up to 35 cm, there is also enough clearance for a CPU cooler height of up to 15.7 CM, and a power supply with a length of up to 21.5 cm. On top of that, this case offers advanced storage, because both of these cases can accommodate up to six SSDs which can be mounted behind the motherboard, in addition to those SSDs spaces. There is an HDD cage which can accommodate two 3.5" HDDs or SDDs. These cases are currently only available in Europe, so the manufacturer's suggested price of 59.90 euros.