You Can Now Set Videos As Profile Pictures On Facebook

If you're done with a static profile picture, Facebook is rolling out a new profile layout that allows users to put GIFs or short videos as 'profile video'. Even though Facebook is not the first to use short videos and GIFs as profile pictures, Snapchat users have had this feature available for quite some time that acted as a medium for users Snapcodes.

The most visible change is the ability to set profile pictures in the form of short looped videos which can be as long as 7 seconds. Facebook began testing for the new design this summer and now the time is finally here as the rollout will begin for U.S and U.K users first. However, Facebook has kept this feature optional, so if you like your profile pictures still, you can opt to stay out of it.

Let's see what more features have Facebook included in its profile redesign for users.

Another important feature that Facebook has included is the option to set your timely profile pictures according to the occasion. For instance, you can temporarily set your image timed to the event. Once the event is over, it will automatically revert to your original profile picture. The profile pictures will be set in the front and center of the profile for a specific time judging by the event's duration. 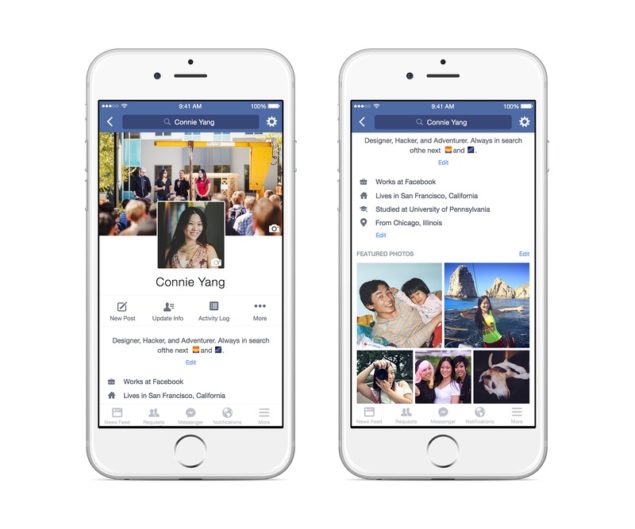 Facebook's significant redesign also features support for emojis in the Bio section. Along with this, a new About section is also part of the redesign that would show a user's location, occupation and academic details. These features are not compulsory so you can choose to negate them. A lot of emphasis has also been paid to Photos that now have their own section. Facebook users also have the ability to 'feature' their favorite photos.

The mobile-first design adopted by Facebook makes the profile more symmetrical and aligned. The profile picture/video is now bigger and situated at the center of the screen. Facebook has adopted a smart move to align user experience with its business. The new profile design displays more information about you and that is what people want when they visit profile pictures of their friends, colleagues or coworkers.

If you are situated in U.S or U.K, there is a better chance that you will notice these changes soon. For others around the globe, you will have to wait till Facebook rolls out a mass update. Let us know in the comments how you liked Facebook's new profile redesign.