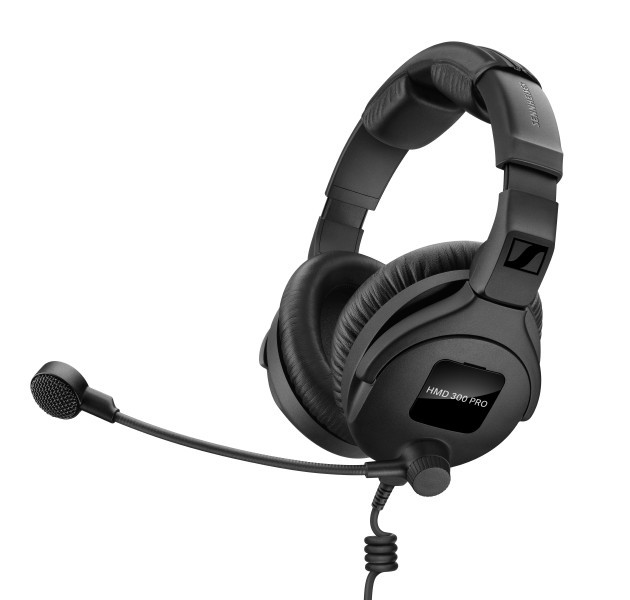 One of the most well known brands in audio equipment Sennheiser has announced the new HD 300 PRO headphones and HMD 301 Pro communication headset. The headsets are aimed at remaining comfortable while still providing high fidelity sound for those working backstage in front of the camera, or even at home.

"Comfort was a paramount design criterion for the circumaural 300 PRO series, thanks to multiple field tests and a thorough fine-tuning process, these headsets have met with very high user approval. We found operators and engineers to be incredibly pleased to listen to a pair of headphones that was modelled so closely on the legendary HD 250 Linear."

The 300 PRO series is a pleasure to wear due to a combination of factors, including new padding material, a comfort zone for the temples of glasses and split headband padding that removes any pressure from the sensitive area of the fontanelle. The headphones have also been given a new fork design that ensures their contact pressure is evenly distributed over the entire ear pad, ensuring both increased comfort and excellent sealing against outside noise.

For inspiration during the design process, Sennheiser's acoustic engineers turned to the HD 250 Linear, a classic model that is still highly regarded amongst professionals today. Despite the difference in the ear cup shapes, the engineering team was able to get extremely close to the precise, linear sound reproduction of the original model, thus placing the HD 300 PRO at the peak of Sennheiser's monitoring headphone portfolio. The detailed, linear response makes the 300 PRO series ideal for music-makers, too.

The Pro 300 series also features the detachable cables you should expect from a high end production quality set of cans like these. It should help in handling noise due to a small series of coils that decouple the cable from the headset.

The series come with a rugged, bendable and twistable headband and customizable nameplates to feature a company logo on the ear cups. The new headset models also feature a noise-compensated, super-cardioid boom microphone for clear communications in loud production environments.

They are also fitted with Sennheisers ActiveGard technology which keeps you from going deaf from sudden sound bursts which they claim does not interrupt the audio signal and is compliant with European EC directives for safety in the workplace.

Third-Gen AirPods Might Potentially Launch in First Half of 2021