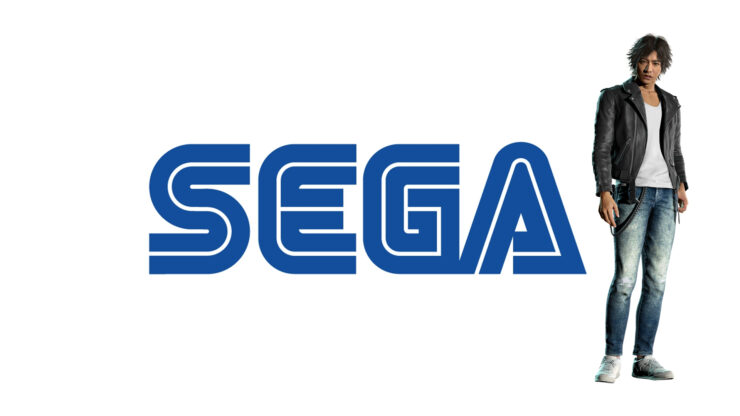 Last year little could be said for Sega Sammy (TYO:6464) other than it was in a slump. From the very first quarter to the results at the end of the year, there were issues. There is no doubt that revenues did finally raise towards the ends of the year, but the profits were still down. Fortunately, the current financial year has gotten off to a good start and both revenues and profits have increased year-on-year.

As seen in the quarterly presentation and results appendix, revenues have come in at ¥72.7 Billion - a slight rise on last year’s ¥68.8bn - but profits have increased significantly from last year’s low figure of ¥0.9bn to ¥3.4bn now. As one could reasonably expect, the driving force of this has been within the entertainment section, covering traditional video games as well as amusement centres and machines. 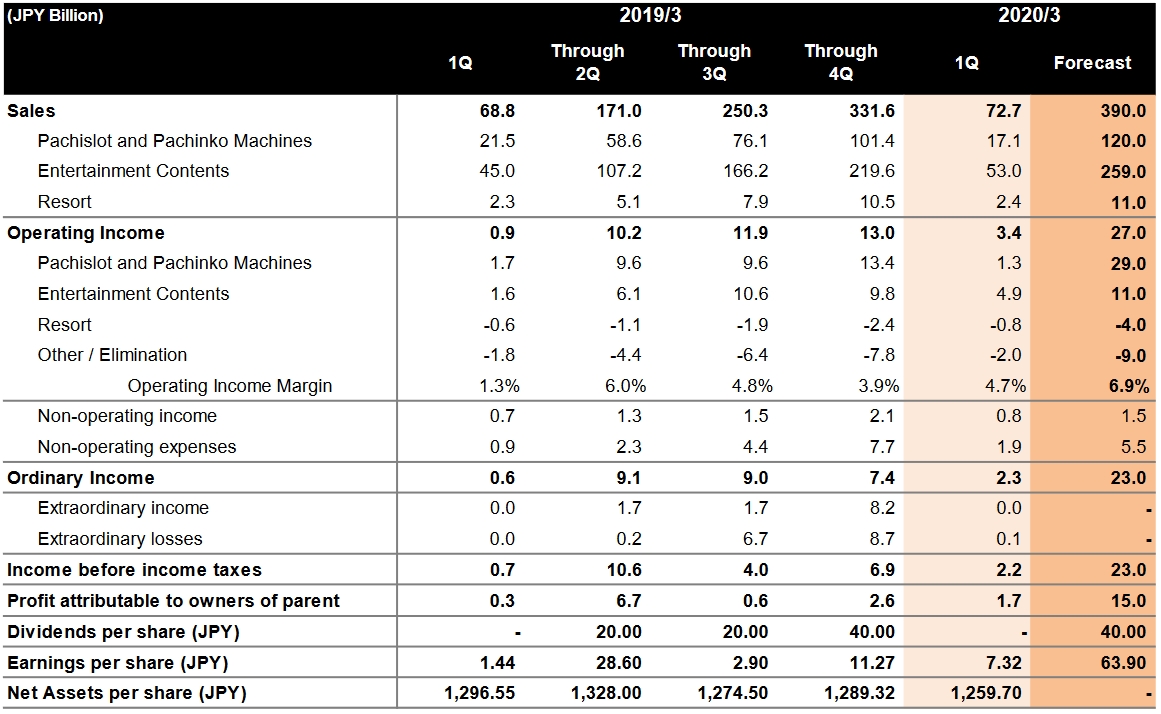 As previously mentioned, the Entertainment Contents for Sega covers a range of items. Particularly, these are video games (digital and boxed), Amusement Machine Sales, Amusement Centre Operations and Animation/Toy. Of particular strength for the first quarter has been video games. Digital Games, which covers mobile and browser titles, has seen a resurgence. Revenue has risen YoY from ¥9bn to ¥11.9bn, with the segment turning a profit of ¥2.3bn compared to losing ¥0.4bn in the same quarter last year.

Packaged Games, covering traditional video games, has seen a YoY rise in revenue from ¥12.3bn to ¥14.7bn, though it should be noted that profits have only risen ¥0.3bn, reaching ¥2.9bn for the quarter. It is worth noting that the primary cause for this will be as a result of investment in upcoming titles. Sega has five titles and a mini-console currently slated for release later this year and also had this to say regarding packaged games:

With regard to the packaged game software market, in the market for hardware of home video game consoles, are expanding, mainly in overseas, for the expansion of the game software sales market due to the growing penetration of current-generation video game console hardware. In addition, there is growing expectation that the overseas digital sales market will expand with the launch of new platforms and services.

Of particular note are the titles linked to the Olympic Games of 2020, of which Sega have the rights to. In addition to this, a new title in the Ryu ga Gotoku (Yakuza) series will be launched in Japan and, as always with the series, will be successful - particularly so when translated and released in the west. Also, while unlikely to be as popular as the mini-consoles released by Nintendo (TYO:7974), the Mega Drive Mini could certainly sell well.

Other Entertainment and Pachinko - A Mixed Bag

Amusements are currently showing mixed results, though much of this seems to be of a similar reason to that of boxed video games. Revenue has actually increased slightly YoY, from ¥9.6bn to ¥10.1bn, though profits have actually fallen from ¥0.2bn to a loss of ¥0.7bn. This slight loss does appear to be as a result of three amusement machines being in development, to be released later this year. On the other hand, the running of amusement centres is seeing small growth throughout. Revenue has risen from ¥9.4bn to ¥10.4bn, with profits rising from ¥0.5bn to ¥0.7bn.

This lies in direct contrast to the Pachinko and Pachislot area, where both revenue and profit have both fallen. Revenue has fallen YoY from ¥21.5bn to ¥17.1bn, with profits also having fallen from ¥1.7bn to ¥1.3bn. The future of this segment isn't looking like it will make a quick return, with Sega saying this regarding the industry as a whole:

With regard to the pachislot and pachinko industry, in the pachislot machine market, the introduction of pachislot machines (No. 6-type) that conform to the regulatory revision and new voluntary regulations has begun, and expectations are rising for market revitalization, as some titles that have new gameplay utilizing the characteristics of the No.6-type machine are receiving high appraisal from players. On the other hand,the number of titles supplied for the No. 6-type machine continued to be sluggish, because the rate of pachislot machines that have been verified to be compatible through prototype testing, which was conducted by the Security Communications Association (Hotsukyo), remained low. Meanwhile, in the pachinko machine market, the launch of pachinko machines that conform to the regulatory revision is progressing.

Finally, within the Entertainment segment, comes Animation/Toy. This has proven to be a strong area, increasing revenues YoY from ¥3.6bn to ¥5bn, and turning a ¥0.3bn loss in the first quarter last year to ¥0.3bn in profit this year. As for the future of this section, the company didn't have a lot to reveal, simply stating:

In the animated film and toy field, the Group plans to record income from new theater films and implement initiatives such as video distribution and will implement the sale of new toy products and regular toy products.

Relaxing in Resorts and Looking to the Future 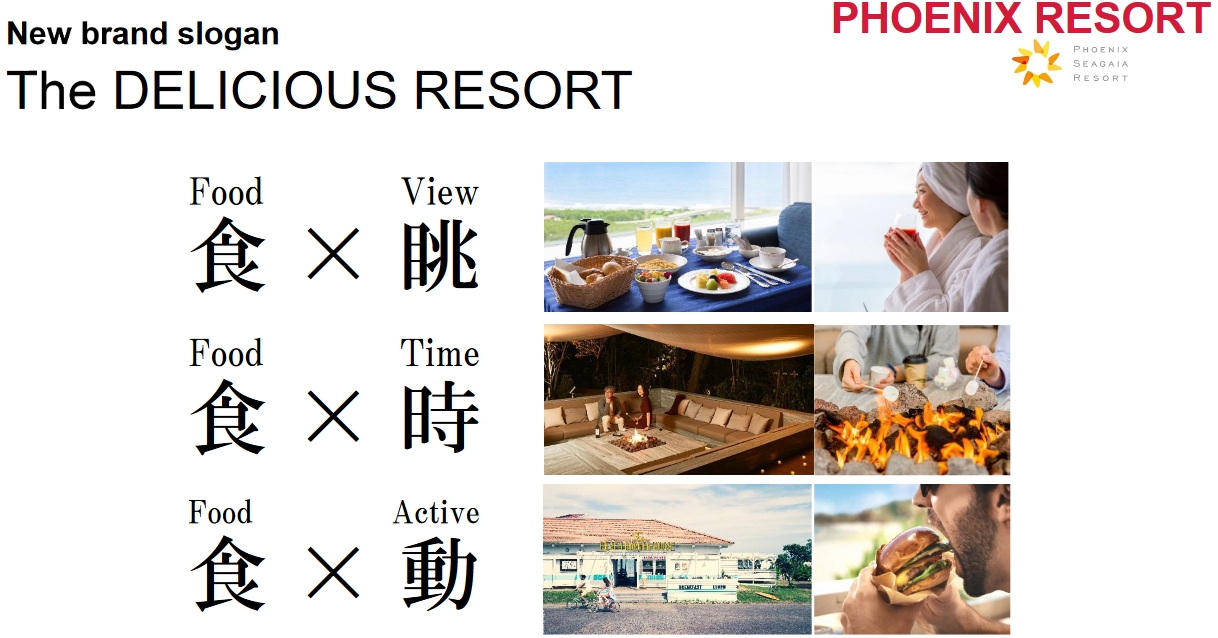 One other area Sega is active in is the running of resorts, particularly the Phoenix Resort in Japan, as well as part-running Paradise City, the first integrated resort in South Korea. The division as a whole has seen a slight YoY increase in revenue from ¥2.3bn to ¥2.4bn, losses have grown from ¥0.6bn to ¥0.8bn. However, there is a sign of hope as the Phoenix Resort itself has seen revenue increase and losses decrease, generating ¥2.2bn in revenue and ¥0.1bn in losses. Paradise City, which is a newer operation, looks to grow and utilise expertise gained from other resorts.

In the Resort Business, at “Phoenix Seagaia Resort,” the Group is working to strengthen the ability to acquire guests. Overseas, the Group will continue to endeavor to accumulate further integrated resorts development and operational know-how through “PARADISE CITY.”The Group also expects the increase of prior investment as the actions required for participating domestic integrated resort will be activated.

As it stands, Sega is currently forecasting a significant increase in revenue over the current financial year, as well as more than doubling profits YoY. One issue with this forecast is that it requires a resurgence from the Pachislot and Pachinko division, which is difficult to predict. Older machines will have to be phased out later this year and Sega does expect this to increase sales significantly. However, the limited number of titles having been verified is low, which could impact this.

However, even should this segment fail to reach the forecast, the potential for the entertainment contents area to make up for this is more than there. This is particularly true simply as a result of the announced titles in the pipeline. In addition to this, there are other titles such as Catherine: Full Body and Super Monkey Ball: Banana Blitz scheduled to release during the year, as well as ones that are currently unannounced and also have the potential to release during the financial year.

All in all, the potential for Sega is undeniable, driven primarily by their entertainments segment and within that, core video games. Particularly as they continue to make great use of successful IP's like Total War, Football Manager, Sonic, Yakuza and more.