Seagate has unveiled the world’s largest SSD to date, and with a capacity boasting of 60TB, this is definitely one storage product that enterprises who rely on fast and large data would love to get their hands on.

Where most solid state drives feature a form factor of 2.5 inches, Seagate’s monumental drive boasts a form factor of 3.5 inches, which will naturally not be able to get accommodated in your notebooks, irrespective of how bulky they are. Perhaps the company was running into problems regarding the amount of storage you can cram in a 2.5-inch form factor, so it’s probably a prudent decision when they decided to stick with the larger form factor.

On Seagate’s official blog, Jay Kramer, who is the chairman of the awards program and president of Network Storage Advisors has stated the following regarding the SSD with the largest capacity announced:

“Enterprise IT customers clearly have an insatiable appetite for greater performance and capacity with new storage investments and are seeking the next storage generation of performance and scale. We are proud to select Seagate 60TB SAS SSD for the Best of Show Technology Innovation Award as it nearly quadruples the highest capacity SSD on the market today and enables a whole new set of potential applications for storage solutions in the marketplace.” 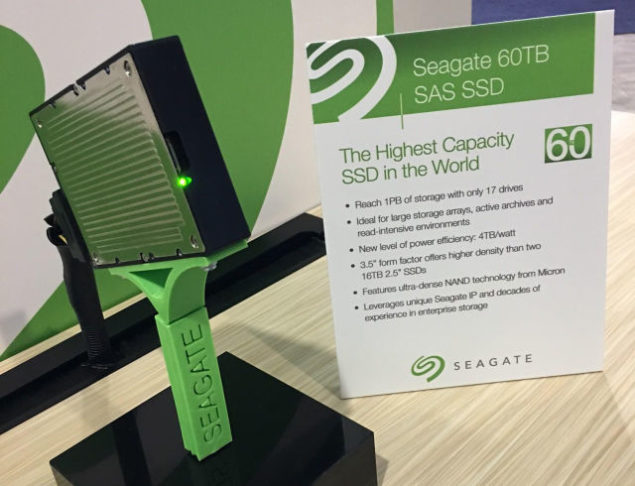 Seagate has not given a price tag or availability details of its 60TB SSD, but it will probably be sold to enterprises from next year. According to the storage manufacturing firm, this SSD will provide the cheapest price per gigabyte to its clients, but possessing a storage value of 60TB does not give us comfort because we could be looking at a price tag hovering between $35,000-$40,000.