Previously the news about GTA V was that the PC version has been pushed to a later release date of 24th of March which as of now, you probably know has been pushed further to 14th of April. This is quite some ignorance on the part of the GTA team which has delayed the game soo many times that the gamers have lost interest in the game now. A rumor was that the Max Payne team was responsible for the game's release on PC and is if that stands then we can probably expect a very good game, but the fact remains that Rockstar has disappointed the PC fans with such a late release of the game on PC. And if you're wondering what the PC requirements of the game are, we've covered that too - Click Here to check out the PC requirements for the game. But no matter how much Rockstar sugar coats it with claims about making the game a smoother experience for PC gamers, this constant delay is just too much and even now we're not sure (looking at the past record), if the game will be delayed again or not. 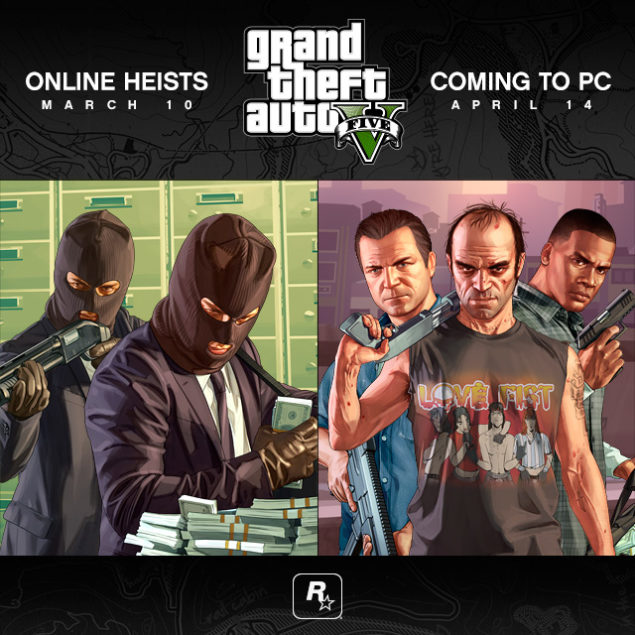 Finally, a date we can work with. GTA Online Heists gets released on the 10th of the next month which will brig a new 4-player multiplayer to the GTA giving gamers much more freedom to team up with friends and attempt missions together. The official website says:

"We are excited to announce that the launch of Heists for GTA Online is scheduled for March 10th. We know it’s been a wait, and appreciate your patience. Heists will bring a brand new 4-player cooperative gameplay experience to GTA Online, giving players the chance to team up to pull off a string of intense, multi-part raids and robberies across Los Santos and Blaine County. Over the next couple of weeks, we will have more information about the launch of Heists and about other new features that we will release with it."

And that's not all, we have pretty amazing screenshots aswell to feast our eyes even though a lot of excitement and faded away due to the constant delays. You can have a look at the new screenshots below.

The screenshots are for GTA Online Heists and Rockstar should after this extended series of delays, be able to put up a good bug-free and optimised game. Well, that is the what the fans deserve, we'll know more within a week of its release.