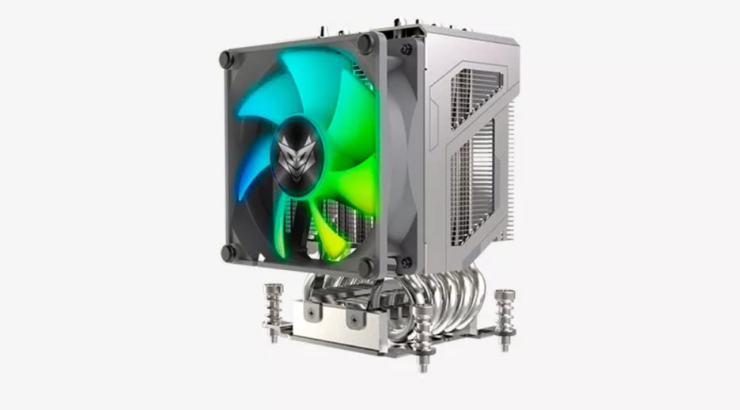 Sapphire's Nitro LTC 100W compact cooling system for CPUs is definitely compact, with dimensions of 92.5mm width x 105mm length x 134mm height, and weighing in at 680 grams, which is stated that the cooling unit will be compatible with 3U cases. It showcases five heat pipes, plated in nickel, which will allow for ample heat dispersion from the AMD AM4 processor to heatsink.

The Nitro LTC by Sapphire will have a cooling capacity of 100 watts, which means that any of the higher-end Ryzen processors, such as the Ryzen 7 5800X, will not be able to use this system, due to being above the 100 watt power. Sapphire does state that the 65 watt Ryzen 5 3600X, Ryzen 5 5600X, and Ryzen 7 3700X are just some of the processors that will be supported.

Sapphire outfitted the Nitro LTC CPU cooling unit with a single fan design, measuring 92mm in diameter. It is manufactured to be extremely durable due to the dual-bearing design, rotating between 450 RPM to 4500 RPM, controlled by PWM. The Nitro LTC sports aRGB lighting control, brightening the fans for a splash of color to the nickel-plated design.

There is some speculation on the Nitro LTC cooling unit. Not all specifications for the design are available on Sapphire China's website.The mounting system is usually found on Intel Xeon chips, making the design to force the user to remove the AM4 brackets to safely attach the cooler to the motherboard. They also state that there is a "pre-applied thermal paste, although Sapphire didn't specify the brand".

Currently, there is no release date or pricing mentioned for the Nitro LTC Cooler on Sapphire's site. It is hard to speculate pricing at this time since Sapphire is typically known for their business and consumer graphics processors, such as Sapphire's Nitro+ series of GPUs, where the prices have ranged between $259 to $399 for those particular graphics processing units. Wccftech will continue to monitor this product to keep potential buyers informed once pricing is available.