Sapphire has become the first AIB to list down the AMD Radeon R9 Nano graphics card. Based on AMD's latest graphics core next architecture, the Radeon R9 Nano made its debut yesterday and was officially announced to feature a launch price of $649 US with market availability planned for 7th September 2015. Aimed at Mini-ITX builders, the Radeon R9 Nano will be the fastest solution carrying the Fiji GPU core and 4 GB of HBM memory. 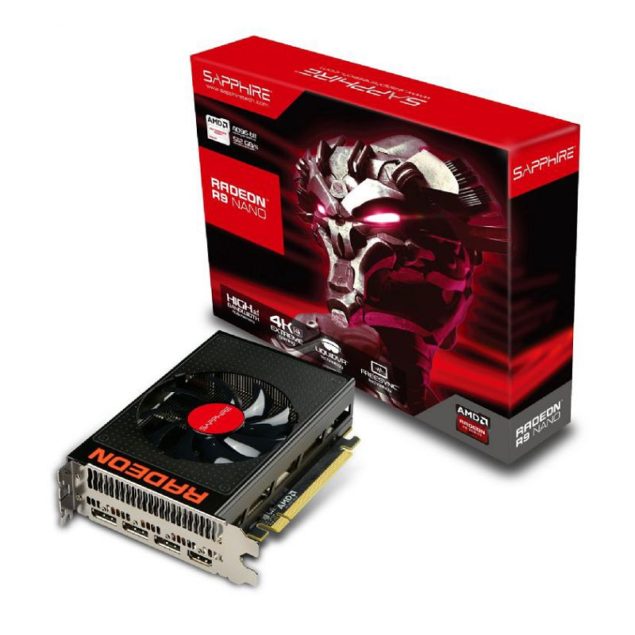 I won't go into much detail for the Sapphire card since its based on the reference design and we had already detailed the card in a separate post which can be seen here. AS for the card itself, the Radeon R9 Nano from Sapphire has the same design, the only thing that has changed are the packaging and a single sticker that is place on the fan. But the listing confirms that the Radeon R9 Nano will be in stock by AIBs and there won't be any issues at launch as far as availability is concerned.

AMD officially stated that the Radeon R9 Nano will be kept as a reference only option for the first three months after which it will be sold in custom variants. AIBs will have full opportunity to make their own Mini-ITX designs for the Nano with better cooling and PCB designs but AMD will definitely tell them to keep the 6 inches length of the card unchanged since that is the specialty of the Radeon R9 Nano. Sapphire would be offering their ITX compact version of the Radeon R9 Nano while ASUS and other AIBs will go for Mini based solutions too. It is not known whether the custom variants will stick to the reference pricing or retail at much higher prices but that will be known once the custom cards start releasing. For now, we will only see the reference variants that are going to launch on 7th September 2015 for a price of $649 US.