Sapphire showcased their latest Radeon HD 7990 ATOMIC graphics card at Computex 2013 but most of the details were kept a secret until now. Expreview have got the technical details of the Radeon HD 7990 Atomic graphics card along with detailed shots of the PCB and the water cooler that's shipped with the package.

The Sapphire Radeon HD 7990 ATOMIC graphics card features two 28nm Tahiti XT2 cores with each featuring 2048 stream processors. These amount to a total of 4096 stream processors which is what we got on various other HD 7990 custom variants along with the reference design. The PCB on the Radeon HD 7990 ATOMIC is a beast though featuring a 12 Layer design with an 18 Phase VRM equipped along side each GPU to feature a toll of 36 phases. The VDDCI is powered by four phases while the MVDD is powered by two phases and both GPUs are connected via the PLX8747 bridge connector. Each GPU has its pair of 3 GB VRAM running across a 384-bit memory.

Power is provided through three 8-Pin connectors which is a common sight on the custom Radeon HD 7990 models. The card features upto 6 mini-display ports for display connectivity and AMD's Eyefinity support. Near the single Crossfire connector which can be used for Quadfire options is a BIOS switch which can be used to pump up the clock speeds via custom BIOS clock configurations. The length of the card can be an issue but the height isn't since the Sapphire Radeon HD 7990 ATOMIC ships with a custom looped water cooling solution that only takes a single slot space. 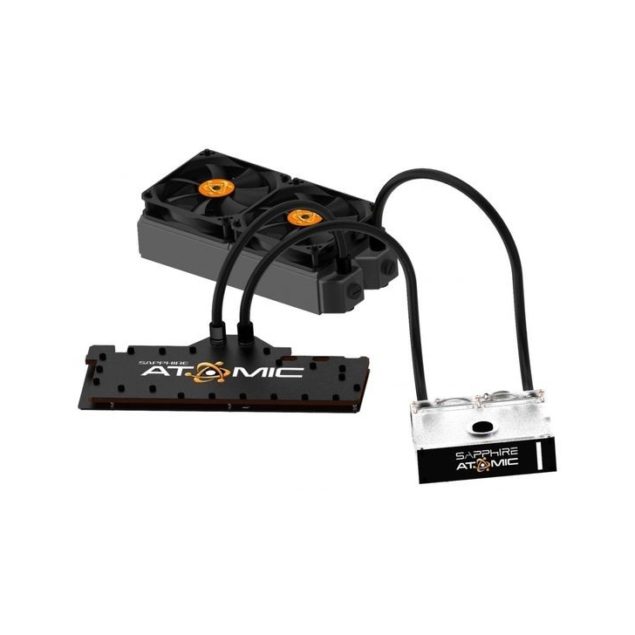