Ever since its release two months ago, Android Pie has found its way to several OnePlus, Nokia and Sony devices. Samsung, like always, is yet to roll out Pie for their devices and it looks like it is unlikely to happen before next year. A Samsung Members community post about possible changes to expect from Pie suggested that we would have to wait until January 2019 before the Pie features and changes would reach users. That time frame has now been reiterated in a post on the Samsung+ app. 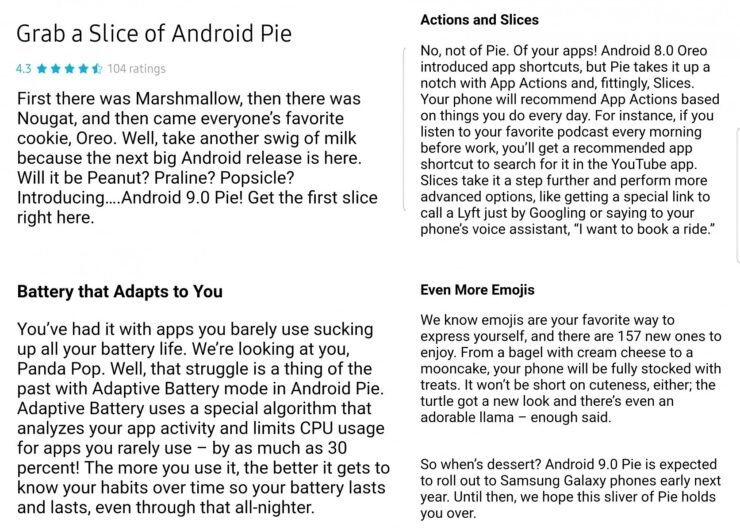 The post talks about some of the general Android Pie features, such as Adaptive Battery, new emojis, and Actions and Slices. Not a lot is explained about what we can expect from Samsung’s customizations and additions. The post, however, does mention a similar time frame for when we can expect the update to roll out to Galaxy phones. Early next year could mean anything between January and March, but January will hopefully see at least some markets get the update. Although the latest generation of Samsung phones come with Project Treble compatibility, it is of little help.

The Samsung+ post doesn’t mention a specific device; it is reasonable to assume that the Galaxy S9 will get the update first.  In all likelihood, Samsung will kick off a Galaxy S9 Android Pie beta program before the year ends. A leaked build of Samsung Experience 10 already exists, and it brings a new dark theme for the entire OS, along with features such as Scene Optimizer in the camera app and an updated Always On Display. Lastly, they talk about all the new emojis. Samsung is releasing 157 new emojis. They came in Android Pie and are Unicode Emoji 11.