If you own a Samsung Galaxy smartphone, chances are that earlier today you received a weird notification on your phone via the Find My Mobile app. The notification only read "1", followed by another "1" that was right below it, and that was it. The moment you would tap on the notification, it would do nothing but close the shade altogether.

Normally, something like this could easily be ignored, but this was not an isolated issue, to begin with. Users all over the internet started reporting this incident on a variety of forums. Turns out, even we received the said notification on a number of different Galaxy devices. Below is a screenshot of the notification. 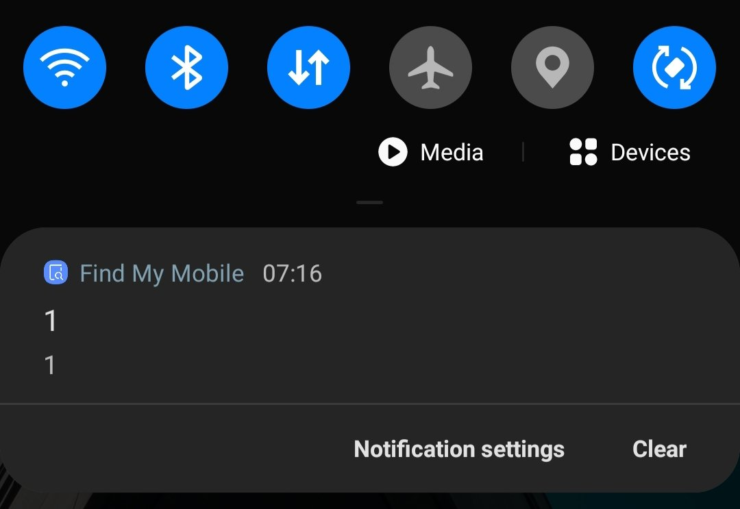 This is not the first time something like this has happened in the mobile world, but the reason why this notification raised more concern than it normally would is that this is coming from an app that can be used to remotely access your phone. Considering how the whole landscape of security threats has evolved over the past couple of years, people did freak out to some extent.

Thankfully, Samsung has confirmed that the notification was nothing more than a result of an internal test and users were not supposed to receive it. This was confirmed by Samsung UK's account who took to Twitter and announced this. Below is the link to the tweet.

Recently, a notification about “Find My Mobile 1” occurred on a limited number of Galaxy devices. This was sent unintentionally during an internal test and there is no effect on your device. We apologize for any inconvenience this may have caused our customers. ^LF

As we have talked earlier, this sort of incident is nothing new as it has happened with other companies, too. OnePlus ended up doing something similar when a large number of OnePlus devices started displaying some text in Chinese. That also raised concerns, but in the end, it was a result of an ongoing test.

Such incidents are common in the mobile world, but the reason why this should be considered a caution is because of the app that was displaying a message. In a different situation, it could have easily been a hacking attempt, as well. Thankfully, all is clear now that we have an official confirmation.

Have you received such a notification on your Galaxy device as well?