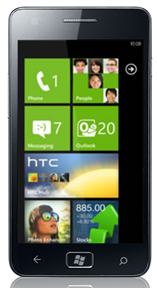 There's no denying the power of Galaxy S2. It's currently the most sought after Android smartphone on the planet, and for good reason. A fast dual core CPU, good GPU, 1GB of RAM, 1080p video recording and SAMOLED Plus display are few of the many reasons what makes this the smartphone to get at this point in time. And to top it off, it has had a great start as far as sales are concerned. So it's only natural that Samsung would be looking to make the most of this opportunity and launch a similar spec'd phone on other platforms.

Rumor has it that the 'other' platform in question is none other than Windows Phone 7. Samsung currently has only two WP7 devices, Focus and Omnia 7, each great in their own right. But something of the caliber of Galaxy S2 is a whole other ball game. So if the rumors do turn out to hold weight, WP7 lovers will be in for a treat whenever this phone does receive the light of day. Expect the world's first WP7 to have a SAMOLED Plus screen at less than 10mm in thickness. As for CPU there is no word yet. Don't expect a dual core since it's not on the 'certified list' of compatible CPUs for WP7, but having used a WP7 myself, it doesn't need more than one core yet. The most logical release date for this would be around the same time as Mango update will be released. Let's hope for Windows Phone 7s sake the rumor does turn out to be true.