The Unthinkable Happened: A Samsung (KRX: 005930) “Replacement” Galaxy Note 7 Just Blew Up – Could Spell Disaster For The Phone Maker 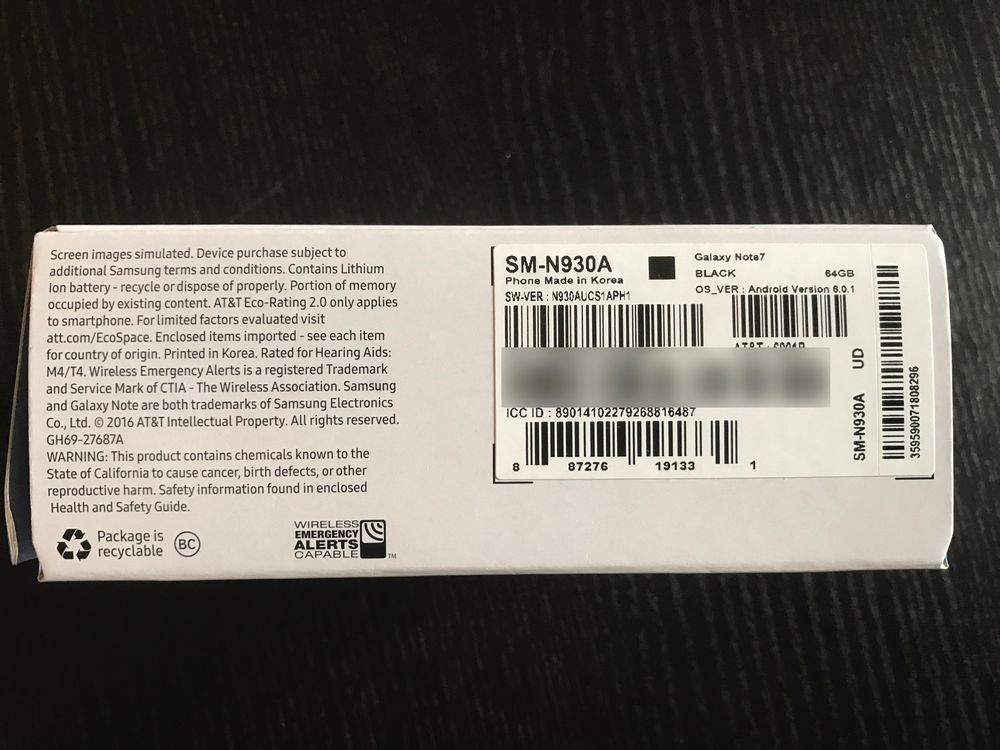 The box of the exploding Galaxy Note 7 with the black box indicator for the replacement phone clearly visible (top centre).

For Samsung (KRX:005930), the unthinkable has happened: just a few weeks into company's efforts to replace all defective Galaxy Note 7 devices, one has caught fire on an airplane. And the shocking thing about this is the fact that it wasn't a defective one at all, it was a "replacement" Galaxy Note 7 provided by the company and supposedly free of the heating troubles that plagued its former self. Needless to say, the phone maker has spent a lot of resources on attempting to amicably replace all the existing Galaxy Note 7 user base, including selling its stake in some prominent companies to raise capital for this venture. It goes without saying that all of that effort would go to complete waste if the replacement phones start blowing up as well - and from what we can see, the unthinkable has happened.

There are two major ways to spot a replacement Galaxy Note 7. Firstly, the box has the black square on it to indicate the fixed version of the Galaxy Note 7 and secondly, the on-screen display also has a green battery logo instead of the standard white one- something they got special permission from Google to use. All of these visual cues were meant to enforce the perception that the new Galaxy Note 7 models were "fixed" and free from any overheating (or at least exploding) concerns. The Galaxy Note 7 that just exploded had both these markers and was clearly a replacement phone and did just what it was designed to never do - it exploded.

The incident happened when passengers were boarding Southwest Airlines flight 944 from Louisville to Baltimore. The passenger in question was Brian Green and reportedly the phone was at an 80% charge level, turned off and in his back pocket when the device started overheating and spewing smoke. That is when he took it out of his pocket and dropped it on the carpeted floor of the plane, where it soon caught fire. The passengers were then quickly evacuated as smoke started to fill the cabin. Fortunately, there was no harm to life or property during the incident apart from some burn marks on the carpet and unscheduled maintenance for the plane.

That doesn't mean that it could not have gone badly. Had the Samsung (KRX:005930) Note 7 decided to overheat just a few moments after, the consequences could have been disastrous. The cabin of an airplane in flight is completely closed off space and would have meant injury or at least serious discomfort to passengers while the plane made an emergency landing. There are reports that the company has placed all of Samsung's phone on the no-fly list, effective immediately.

What does this mean for Samsung (KRX:005930)? Preliminary analysis of financial impact

The consequences of this event on the company will be severe. The most alarming thing about all of this is the fact that the exploding note 7 was one that was not supposed to explode. This brings into question the safety of every single Galaxy Note 7 device out there - including the ones that Samsung has replaced and promised to be safe. It also means that the huge amount of cost the phone maker has incurred could be all for nothing. Since this is a developing story, we still advise a little amount of caution but the evidence so far is pretty damning.

The stock price of Samsung (KRX:005930) took quite a hit when the initial reports of the Galaxy Note 7 exploding started coming in. However, once it was clear that the company had started to get things in control again, the trend quickly shifted to the bullish side and the stock easily recovered all the market cap that had been lost in the fiasco - as you can see from the dip in the graph below. needless to say, the recovery was based on the fact that the replacement phones would do what they were intended to do: not explode. If this basic assumption goes away, then the company's stock is exposed to severe weakness towards primordial support levels. Just by eyeballing the graph, I can tell you that the nearest support level should be expected around the 1,465,000 level in the event of an Information Cascade.

Billions, but how many of them?

After the recall was first announced, initial estimates put the cost at about US$1 billion. It was painful, sure, but if they categorically dealt with the issue, it would probably have been money well worth spending. Now however, we have to question whether the Note 7 itself is irreparably tainted. According to Credit Suisse estimates, Samsung Electronics gets about $600 and $108 dollars in revenue and profit respectively from each Note 7 sold. Analysts put the expected numbers to be sold this year at anywhere from 12 to 14 million units, thereby expecting up to about US$1.5 billion in profit to be contributed by this one model alone, if that disappears,plus the costs of a potentially pointless recall and how to handle all the units in the channel and production still, well... this is material information.

In fact, if investors become bearish about this scrip then you can expect the stock price to breeze past the previous support level as well - since the cost incurred by the company to fix the issue would have essentially gone to waste. One thing we can state for sure, in the immediate aftermath of this event, the stock price is going to be extremely volatile. At this point in time, we don't know for sure whether this replacement Galaxy Note 7 exploding was just a very improbable and bizarre coincidence or something that is wrong with the Galaxy Note 7 at a fundamental level. It is also my duty to tell you that as far as we know, all the evidence points to an inherent problem, if this was indeed, a replacement Galaxy Note 7.

The company has not yet responded to this event, but whenever they do, this can only go two ways. Either this was an isolated event, and we will probably never see a repeat episode or the Galaxy Note 7 replacement phones do have a problem and the company will be forced to practically write off the Galaxy Note 7 product line - since incurring, even more, cost for a replacement-replacement Note 7 would be impractical, to say the least. Either way, the stock price is going to be seeing some very turbulent times come market open and will probably stay that way for a while now. Expect panic selling by investors who have already borne the price shock of the initial recall.

Another very important thing to mention is the fact that the user sentiment regarding Samsung devices is changing brutally. We have seen editors of various tech publications urging users to shift to either an iPhone 7 or the new Pixel series. This is something that is going to cause brand problems with Samsung (KRX:005930) in the long run. The public does not easily forget and smartphones aren't exactly cheap nowadays. The average consumer might not be willing to risk his hard-earned cash on a product that might or might not explode, regardless of how hard Samsung tries to convince them it safe. Significant trust has been lost in this case as far as the consumer perception goes and the company will have to work hard to recover it - or else risk losing a portion of their good will.

A burden shared is a burden halved, or is it?

Final point here. Samsung was likely not planning on bearing the costs of the initial recall alone. It's likely the giant would have looked to its battery partners Samsung SDI (KRX: 006400) and Amperex Technology to shoulder some of the costs. Questions will have to be raised again as to whether the fault is truly in the batteries or if there is a fundamental flaw in the design of the Note 7. Additionally, how capable these other companies are of sharing the costs is also a question mark as the costs no doubt continue rising.