Samsung Internet is one of the best browsers that you can get the chance to use on your Samsung Galaxy phone. However, the last time the beta was updated was back in November, and now, we have another major update hitting the stores. The latest Samsung Internet beta adds a couple of new features as well as improvements such as privacy enhancements to the helpful Smart Anti Tracking, as well as HTTPS by default, privacy board, and more.

Samsung Internet 17.0 beta announces two new enhancements to Smart Anti Tracking, a privacy feature known for automatically removing tracking cookies. The first is "script-writable storage Tracking Position" which will remove all client-side cookies after seven days so it can minimize the user tracking/profiling. The second feature is that the Smart Anti Tracking feature will be turned on by default in certain regions such as the U.S., Korea, and Europe.

In addition to that, Samsung Internet 17.0 beta will now load the HTTPS version of the websites by default. This was introduced as an optional feature in the previous version but now, it is turned on by default.

Another addition is the Samsung Internet beta now also makes it easier for users to access privacy settings by adding a new privacy board panel to the Quick Access Page. The feature is turned on by default and provides privacy reports that can easily be turned off or on if you do not want them. 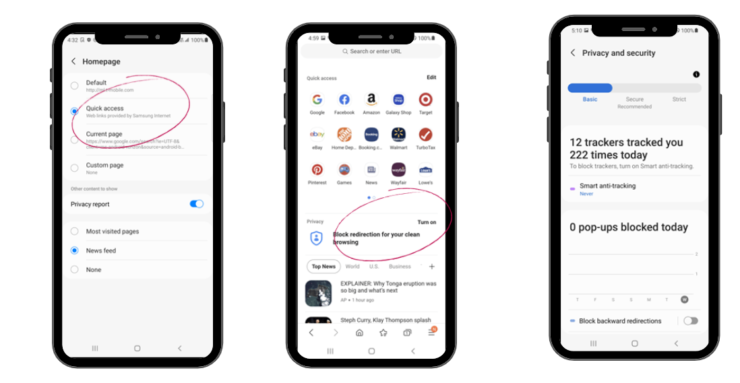 The latest update also brings a LiveText feature that lets you copy, translate, or do a web search on the text that is within an image. It uses OCR to detect and extract the text from images. Additionally, the Samsung Beta 17.0 now lets you make a new tab group via drag and drop, users are also getting enhanced search experience across Bookmarks, History, and Saved pages. There is also support for Storage Access API, and better positioning of video subtitles.

The beta is currently rolling out to all the users through Google Play Store and Galaxy Store and should hit your device soon, as well. For all the information on the latest update, check Samsung's post.