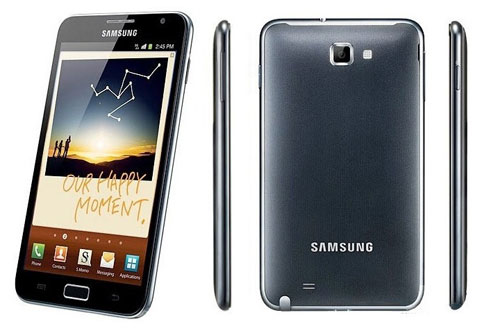 The Samsung Galaxy Note is one of those smartphones that stands out from the crowd, quite literally in this case thanks to the huge 5.3" Super Amoled 1280 X 800 pixel display. The device was expected to launch this fall and now Samsung has announced that a Europe launch is in order before the end of October with major launch events in Germany, UK and France. Samsung's own country, Korea will be getting the device a month later, although that might seem like a let down for Koreans wanting the device, they will get a bit of exclusivity since the korean Galaxy Note will be packing a 4G LTE radio aswell.

The Galaxy Note has a 5.3" Super Amoled display as mentioned earlier, 1.4Ghz dual core processor, 1GB RAM, 16/35GB internal memory, 8MP/2MP rear and front cameras and Android Gingerbread 2.3 with Samsung's TouchWiz and S Pen UX user interfaces. The latter is for the use of the included S-Pen to take notes on the device. All of this will be powered by a huge (atleast for a traditional smartphone) 2500mAh battery.

The device certainly has a feeling of exclusivity to it, and fans of bigger and bigger screen smartphone should be delighted at the huge Super Amoled HD screen. The rest of the specifications are top notch aswell and the battery should hopefully give good battery life. Its a good 1000mAh above what you get on normal smartphones but the bigger screen requires it so hopefully 10-12hour moderate usage should be possible. Samsung's home country definitely gets exclusive treatment with an LTE version of the tablet, and as previously rumored they'll be getting an HD LTE version of the Galaxy S2 aswell.