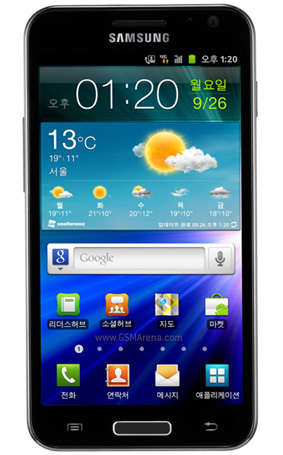 I'm sure most you, including me were sure the Nexus Prime would be the first phone in to grace the HD screen we've all been talking about recently. Well turns out we were all wrong. Samsung has just announced the Galaxy SII HD LTE (yes that's the actual name) and this phone is all about the screen. A massive 4.65'' SAMOLED (PLUS?) screen with a mind boggling resolution of 1280x720 which results in a PPI of 316. A quick comparison: most run of the mill 14-15'' laptops come with a 1280x800 screen so you can imagine what kind of display this phone is carrying. It's not confirmed yet whether this is a regular SAMOLED display or the Plus variant. If it's regular then keep your fingers crossed because this might end up having a Pentile Matrix display we've all come to loathe.

There's no word on the CPU or RAM though it wont be surprising if Samsung uses the same Exynos CPU they used in the Galaxy SII. And now for the heart breaker; the phone is LTE only and will be for the Korean market only. That being said it would be very stupid of Samsung to not release an international variant so don't get your hopes down just yet.