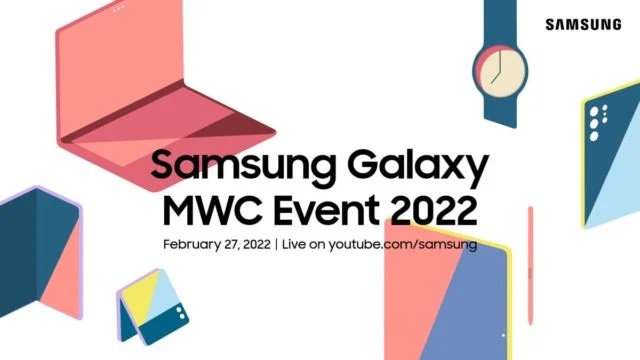 After 2021's show, Samsung has decided to return to the Mobile World Congress once again. While last year, the company did not really release anything new in terms of smartphones or tech, we did get the chance to see some wearable-oriented releases. Earlier today, Samsung has announced that it will be showing up at MWC 2022 later this month.

The company decided to send out emails today and it confirms the South Korean firm's presence at MWC 2022. At the time of writing, the company has not given any information on what they are going to be releasing but for those wondering, the Samsung Galaxy MWC event is going to go live on company's official YouTube channel as well as the company's website.

For those interested, the Samsung Galaxy MWC event can be watched on February 27 at 7:00 PM CET. It is also important to understand that MWC itself starts on February 28th, but Samsung's decision to take the stage a day earlier and this should not really come as a surprise.

At the moment, it is also clear just what exactly Samsung has planned in terms of the releases. We might see a number of products ranging from laptops, tablets, smartwatches, or some refreshes of the older products. We can also hope to see some new software features.

The email did not share any other information but did share an illustration, showing what is to come at the Samsung Galaxy MWC event.

The animation above shows almost all the devices that Samsung has in their ecosystem but honestly, it is too early to say what the company might be working on. Whatever the case might be, we will be tuning in on the Samsung Galaxy MWC event and will keep you posted about everything that is announced.