Things on the gadget front have finally settled down in the mobile world, with the only major launches expected now to be Apple and Samsung's upgrades to the iPhone and the Galaxy Note lineup. While the Note 6 is expected to see a greater focus on overall specifications rather than core hardware performance, the iPhone 7 and the iPhone 7 Plus will be coming with the Apple A10 on board.

Their predecessors, the iPhone 6s and the iPhone 6s Plus came with the A9 on board, with the processor being split between Samsung and TSMC. While things might be different this year, Samsung has announced details for its 10 and 7nm manufacturing processes, so lets take a look at what further upgrades to expect.

Samsung Details Its 10 And 7nm Processes; EUV To Be Utilized At Full Scale For 7nm

As we sink in 2016, the mobile hardware sphere has managed to shift out of focus, with little information surfacing about future chipsets. The only SoC to make it to the rumor mill over the past month has been the Snapdragon 830; with Qualcomm's 2017 processor upgrade expected to refine the Snapdragon 820 in terms of power consumption and performance specifications.

Both Samsung and Qualcomm have increased their ties recently when it comes to manufacturing the Snapdragon and now, given the former's latest information, looks like Samsung's ready to take things to the next level for mobile processors. The Korean manufacturer claims to have made quite a few advancements on the hardware front, in terms of packaging, lithography and process upgrades.

Starting from the packaging front, the company claims to have further refined its development process starting from design to mass production. In addition, the overall density of the chip package should also be reduced significantly coupled with greater optimization of space. Samsung's also increasing the range of services that it offers to its manufacturing partners this year, so we should see the scope of its fabrication operations increase this year as well. 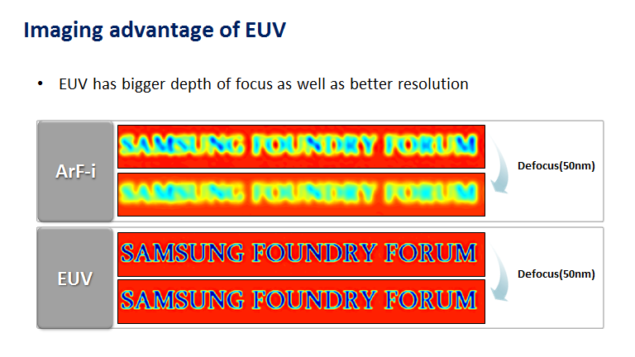 An important feature of Samsung's announcement relates to Extreme ultraviolet lithography, as the company claims to be ready to apply the process to 7nm at a mass scale. When it comes to making this jump, a critical bottleneck that's been facing many manufacturers out there is patterning on the chip surface, that allows for the creation of a general  architecture. When node size is decreased to 7nm, single patterning rarely makes the mark, forcing fabs to either switch towards multi-patterning or EUV, with the latter expected to come with a greater overall cost.

The different between EUV and the current ArF laser used by Samsung for photo lithography can be seen in the image above. If Samsung's managed to improve results on such a good scale then we should expect the Korean manufacturer to retain its position in the mobile hardware world for quite a while. But you shouldn't expect Samsung to employ EUV in every scenario, with the company still expected to utilize the standard 193i ArF.

The company also claims to have further refined its current 14nm and the 10nm in terms of cost, performance and design. On the 14nm, the company claims to have further reduced costs through the 14nm LPC, while keeping performance at similar levels to the current 14nm LPP chips. The 14nm also sees further expansion to automotive and server segments via a RF add-on, increasing its applications on other fronts. Coming towards the 10nm, we're finally getting a second generation 10nm LPP from Samsung as well. The 10nm LPP is expected to provide up to 10% performance/speed upgrades over the 10nm LPE, while keeping other variables such as design and costs similar.

Finally, there's also talk about a greater amount of facilities and features to be offered by Samsung's foundries. Not only will the Korean manufacturer be providing greater services to its manufacturing partners, but it's also providing reference design flows and other services such as packaging which had previously been reserved for in-house projects only.

So as things settle down in 2016, Samsung seems to have increased its foundry capabilities quite significantly. After all, we saw Taiwanese fab TSMC give the Korean manufacturer a tough time last year, particularly for the A9 iPhone 6s and the iPhone 6s Plus. To make things even more interesting, current word in the rumor mill suggests that TSMC will be getting a greater share of A10 orders this year as well, even though Samsung's A9 offering comes with a lesser surface area when compared to its counterpart. Thoughts? Let us know what you think in the comments section below and stay tuned for the latest.