Earlier this year, AMD introduced the Ryzen 7 5800X3D, a CPU that was designed to offer the best value and performance to gamers by leveraging 3D V-Cache technology which allows AMD to stack large pools of cache on top of Zen chiplets, driving up performance in bandwidth starved games & applications. The benefit was clear right from the beginning with reviews showing a huge gaming performance boost that matched and even exceeded Intel's fastest CPU, the Core i9-12900K, at the time. With the Ryzen 7000X3D parts, AMD plans to repeat that and give gamers another boost that could potentially make AM5 the fastest platform to game on.

There are certain rumors and some official information from AMD that we know about the Ryzen 7000X3D CPUs already.

The first 3D V-Cache CPU from AMD came in just one flavor, the Ryzen 7 5800X3D. With the Ryzen 7000X3D, AMD is rumored to offer more than just one SKU. Current rumors have pointed to an 8-core and 6-core variant but there's a room open for 16-core and 12-core variants too. We cannot say for sure how many variants will be coming to the market but in the case that we see a full-on 3D V-Cache lineup with four SKUs featuring 16, 12, 8, and 6 core SKUs, then the lineup would look something like the below:

The other thing to talk about is the amount of 3D V-Cache we would get to see on each variant. The first 3D V-Cache chip featured 64 MB of stacked cache on a single CCD. If AMD is to keep the exact same cache count, we would get up to 96 MB of L3 cache on the single CCD & 192 MB of L3 cache on the dual CCD SKUs. AMD can go out and offer increased stacked cache amounts on their newer chips but that's something we cannot confirm at the moment.

Another important thing to talk about is the overclocking support. The first generation of 3D V-Cache CPUs didn't get any tuning options and the voltage options were locked (only to be opened up by certain motherboard vendors using BETA/Non-Public BIOS). However, AMD's Robert Hallock (Ex-Head of Technical Marketing) confirmed that while overclocking was disabled for the first chip, AMD could have future generations of 3D V-Cache CPUs that may support overclocking just like any other CPU.

Another tradeoff besides overclocking was the slightly reduced clock speeds and that may still be a thing on the AMD Ryzen 7000X3D CPUs given that the performance benefit that comes from cache makes up for the losses that occur due to the reduced clocks.

AMD currently markets its Ryzen 7000 CPUs against the 13th Gen Raptor Lake CPUs comfortably although the competition does tend to offer slightly better performance and better value at the moment.

Now these are preliminary prices and once again, none of the SKUs have been confirmed but this is what we believe that the pricing structure might look like. As for the launch, we have managed to get hold of an internal roadmap that more or less confirms that AMD will be unveiling its Zen 4 3D V-Cache parts at CES 2023. The processors will be positioned as the fastest gaming chips on the market and will be taking the gaming performance crown from Intel's Raptor Lake 13th Gen CPUs.

Which one would you get? 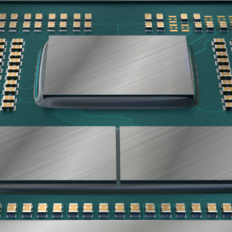