This month we saw a video released that showcased the upcoming RollerCoaster Tycoon World, a roller coaster theme park simulator. What we weren't expecting, however, were the graphical assets from the previous installment that was released in 2004. Area 52 Games has assured us that the trailer isn't complete, however.

RollerCoaster Tycoon World will be revamping the graphics to be far more modern than the recent trailer suggested they would be.

Since the release of the aforementioned RollerCoaster Tycoon World trailer, there has been a backlash by the fans of the series that have noticed that no serious advancements in the visual department have actually been made. Frankly, it has been described as looking a lot like its predecessor, RollerCoaster Tycoon 3 that was released all the way back in 2004.

The trailer does indeed look like any other mobile game available for iOS from last year. So why would such an ambitious trailer be released at all? To be a gameplay showcase, of course. But no matter how disappointing the visuals are, this series of games is always a bit of a delight.

Area 52 Games, the developer, has posted to their blog and have insisted that they had been focusing much of their development efforts on the core functionality of RollerCoaster Tycoon World to include better physics and other gameplay elements.

That being said, they didn't quite get to updating the graphics engine yet. But don't fret! They're just as dedicated to making the game look as realistic and as frightening as possible. They're after a truly immersive experience, and will thus start using the Unity 5 engine to achieve that.

"Regarding the current state of game graphics, we have been exploring prototypes for a while and are happy to announce we will be upgrading to the Unity 5 Engine.  We hope to be able to share the results of the upgrade by this summer. We hope to take full advantage of the many new environmental, lighting, and shadow improvements as well as many other features in our original Unity 4.6-based engine to create a game that looks great. Our early results are extremely promising. We know that today these words must ring hollow, but trust that we are doing everything we can to make the game look excellent."

So despite the ambitious release of the trailer that didn't quite show the potential of RollerCoaster Tycoon World at first, it at least gives us a glimpse into what features we can expect to see. There is no hard release date yet, though it's still on track for a Mid 2015 release.

Now they need to start adding support for VR hardware... Can you imagine a complete VR theme park experience with the Oculus Rift? But don't worry, we're getting a whole new graphical experience with our roller coasters. So if you've ever wanted to own a virtual theme park, you'll get a good looking one too! 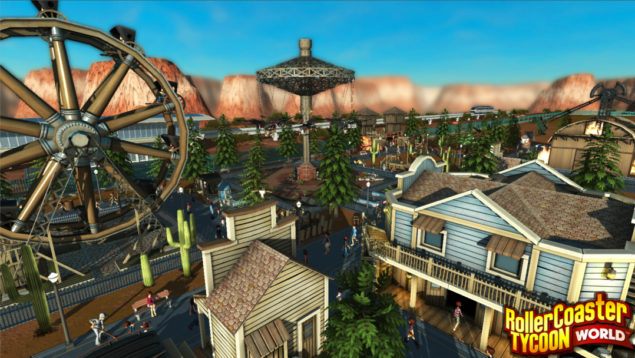