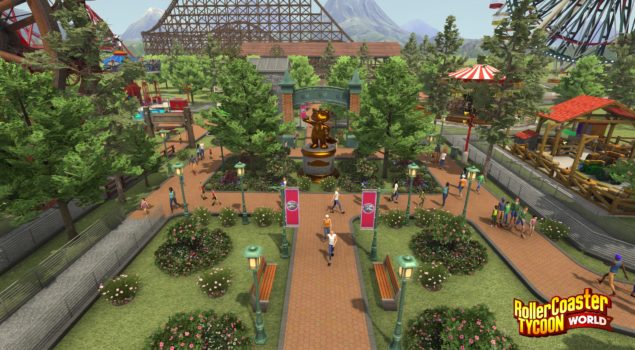 Check that the weird metal bar that wouldn't ever protect you in case of a crash is in its proper position, start scheming of how best to kill all your guests and get ready for the next entry of the RollerCoaster Tycoon franchise, which is storming onto Steam's Early Access programme later this month.

New features for the latest title in the longrunning franchise include support for user generated content, the ability to build your coasters at any angle instead of having to rely on ready placed grids and themed areas of your park, which can affect the enjoyment of some audience members.

And let's face it, so long as we can still torture the people paying dozens of dollars to enter our parks, it'll probably be worth a look. Cheap fries, high salt, expensive drinks.

"The RollerCoaster Tycoon franchise is beloved by millions of fans worldwide, which is something we take very seriously. After careful consideration, the decision to go through the Steam Early Access program was made to ensure that we can get RollerCoaster Tycoon World in the hands of the dedicated fans that have followed us throughout the development process as soon as possible.

“As passionate RollerCoaster Tycoon fans ourselves, we look forward to working with our community and those new to the series on how we can make RollerCoaster Tycoon World the best theme park simulation game possible. Early Access allows us to openly communicate with fans about upcoming content and features and the community will help us shape our roadmap.”

“Our realistic approach to the graphics and gameplay, combined with several next-gen updates is breathing new life into a franchise that has stood the test of time.

"This is just the start for RollerCoaster Tycoon World, as we look to the future of the title and how we continue delivering a fun, immersive experience. Opening up the game to user generated content natively allows for unlimited creativity and expansion for years to come both for us and the community.”

RollerCoaster Tycoon World will be available to buy in Early Access on March 30th.