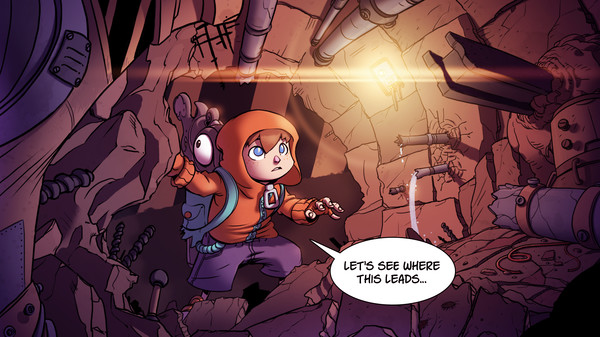 It's time to Rise to the occasion and save the world of video games. Super Mega Awesome Hyperdimensional Team's awesome looking platformer, Rise & Shine, is available for pre-order on Xbox One.

Rise & Shine combines elements from all your favorite bullet hells, platformers, and action-packed arcade shooters into a wonderfully violent action game. You play Rise as he and his talking gun, Shine, save Gamearth from massive killer robots hellbent on destroying the world.

Expect not to have a moment's rest as the game's brutal and unforgiven combat will test your reflexes. It's reminiscent of the Metal Slug games where cutesy graphics and hardcore action are married together for fun results. Add in some clever puzzles and just like that, Rise & Shine could easily be one of those great indie games that really should not slip under your radar.

Each stage is made up of hand-drawn images that use "multiple parallax scroll layers", which result in no "tiling or repeated elements." Judging from the trailer, it could already win some folks over with the art style alone.

Rise & Shine is being developed by the folks over at Super Mega Awesome Hyperdimensional Team, who've made some pretty successful mobile games like Supermagical and Pro Zombie Soccer. It's good to see them flex their muscles a bit in this charming game. Partnering with Adult Swim Games seems like a great decision considering the publisher's portfolio of great games like Robot Unicorn Attack, Headlander or the upcoming Toejam & Earl: Back in the Groove.

Rise & Shine will be out on January 13 on Xbox One and PC. The trailer and screenshots below should give you a better sense of how chaotic things can actually get.