The latest Tomb Raider game from Crystal Dynamics is going to be released on the PC platform in a few hours. Known to us as Rise of the Tomb Raider, the game first hit the Xbox consoles November 2015 but that was just a timed exclusive for the Microsoft based consoles and will now be hitting the PC platform with an updated list of graphical features built to be run on modern graphics cards. 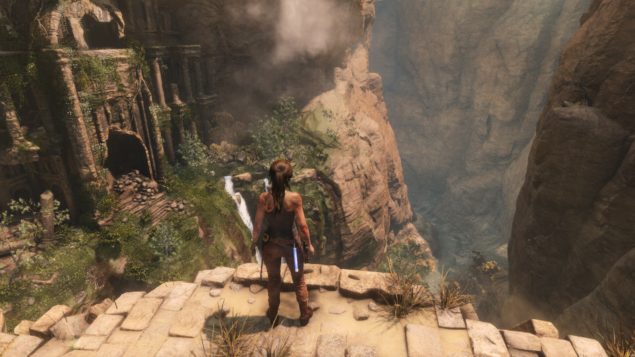 Rise of The Tomb Raider PC Performance Analysis - Gets Tested With AMD and NVIDIA Cards, GeForce Leads The Way

The Rise of the Tomb Raider come to the PC two months after its release on the Xbox consoles. The release is fitted with a list of graphical updates that include the high-end ambient occlusion technique from NVIDIA that we know as HBAO+ along with higher Anisotropic filtering of 16x, full hardware based tessellation, increased geometry and textures, dynamic foliage compared to static allowing foliage to react dynamically to the player movement in the environment and last but not least, AMD's Pure hair technology which uses their TressFX 3.0 engine to render and emulate Lara's hair realistically.

We had previously learned that Rise of the Tomb Raider also uses NVIDIA VXAO which is a Voxel based ambient occlusion effect whose tracing is approximately three times cheaper than full fledged Global Illumination.When compared to SSAO, this kind of Ambient Occlusion also provides a more stable effect throughout the rendered world. This technology has a co-relation with ROVs (Rasterized  Ordered Views) on new cards such as Maxwell and is a part of the DirectX 12 API. While Rise of the Tomb Raider isn't exactly a DirectX 12 title, there are files in the release that show the use of such effects and would be something that NVIDIA will likely detail at their GDC session in March, this year.

NVIDIA Research will present a collection of next-generation rendering techniques, including new directions in anti-aliasing, spectacular lighting, and shading languages.

There are some high-level features that are adopted by the game. As explained, HBAO+ is from NVIDIA and the Pure Hair renderer is from AMD. It's an interesting combination and comparing the two effects as posted by PC gaming site, PCGameshardware, we note that both have a fraction of an impact on FPS. The title comes with a range of options, In Square Enix's own stream hosted yesterday, they showcased a range of PC settings for their latest title. The Display panel allows adjustment of Brightness, Resolution, Refresh Rate, Anti-Aliasing, V-Sync and allows you to enable/disable full screen mode and exclusive full screen mode.

The graphics panel is where you will adjust the graphical effects to suit your preferences, these include either selecting from a pre-defined preset or using your own custom config with adjustments ranging from Texture Quality, Anisotropic Filtering, Shadow Quality, Sun Soft Shadows, Ambient Occlusion, Depth of Field, Level of Detail, Tessellation, Scren Space reflections, Dynamic Foliage, Bloom, Vignette Blur, Motion Blur, Pure Hair, Lens Flares and Screen Effects. This is a pretty good set of configuration settings but you need to have a decent PC to run the game with a range of these settings enabled. Following are the requirements of the game:

Looking at the benchmarks posted by PCGameshardware, we could see the GeForce cards lead really well in all conditions. Even with Pure Hair and HBAO+ effects, the game ran pretty well on cards like the GeForce GTX 980 and the GeForce GTX 980 Ti. The Radeon R9 Fury X was performing good on its own however it couldn't match its NVIDIA based competitor aka the GeForce GTX 980 Ti. The GeForce GTX 970 managed to be faster than both Hawaii (Grenada) based cards up to 2K (2560x1440) resolution. At 4K, a single graphics card didn't make any sense as even the top end GTX 980 Ti managed just 30 FPS on average but that's a given at this point since the game is really graphically loaded and the amount of horsepower you need to run this at 4K is immense, you'd definitely want a SLI or CrossFire setup to give a playable frame rate or tone down the settings a bit.

An average framerate of 60 or above is an excellent indicator of overall performance, but it gives you little idea of how the game 'felt'. Was the experience stuttering? Were there momentary stalls? And did some moments of the game run at a much lower framerate? To discover the answers to those questions we need to instead examine frametimes, the length of time it takes a GPU to render each frame of gameplay.

In our Rise of the Tomb Raider test there are only a few momentary spikes, and none above 25 milliseconds, there are no periods of spiking between low and high frametimes, almost all of the benchmark is below 20 milliseconds, and much of it is at, around or below 16.6 millisecond, the 60 FPS sweet spot. In other words, the GeForce GTX 970 not only delivers a High level of graphical fidelity at over 60 frames per second, it's also super smooth with no stuttering or stalls, giving you a fluid, responsive gaming experience. 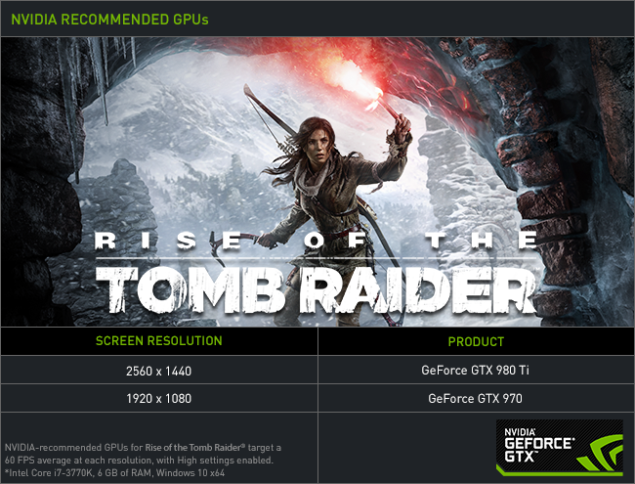 For NVIDIA users, it is advised to download the latest game ready drivers (GeForce 361.75 WHQL) from the GeForce webpage. It should also be stated that Rise of the Tomb Raider is bundled with a range of Maxwell based GeForce cards which include include GeForce GTX 970, 980, 980 Ti, GTX 970M, GTX 980M, GTX 980 (Mobility). The offer is available up to 23rd of February. For AMD and NVIDIA owners who wish to purchase Rise of the Tomb Raider can head over to Steam and download it on purchase as Pre-load is available before the game goes live tomorrow.