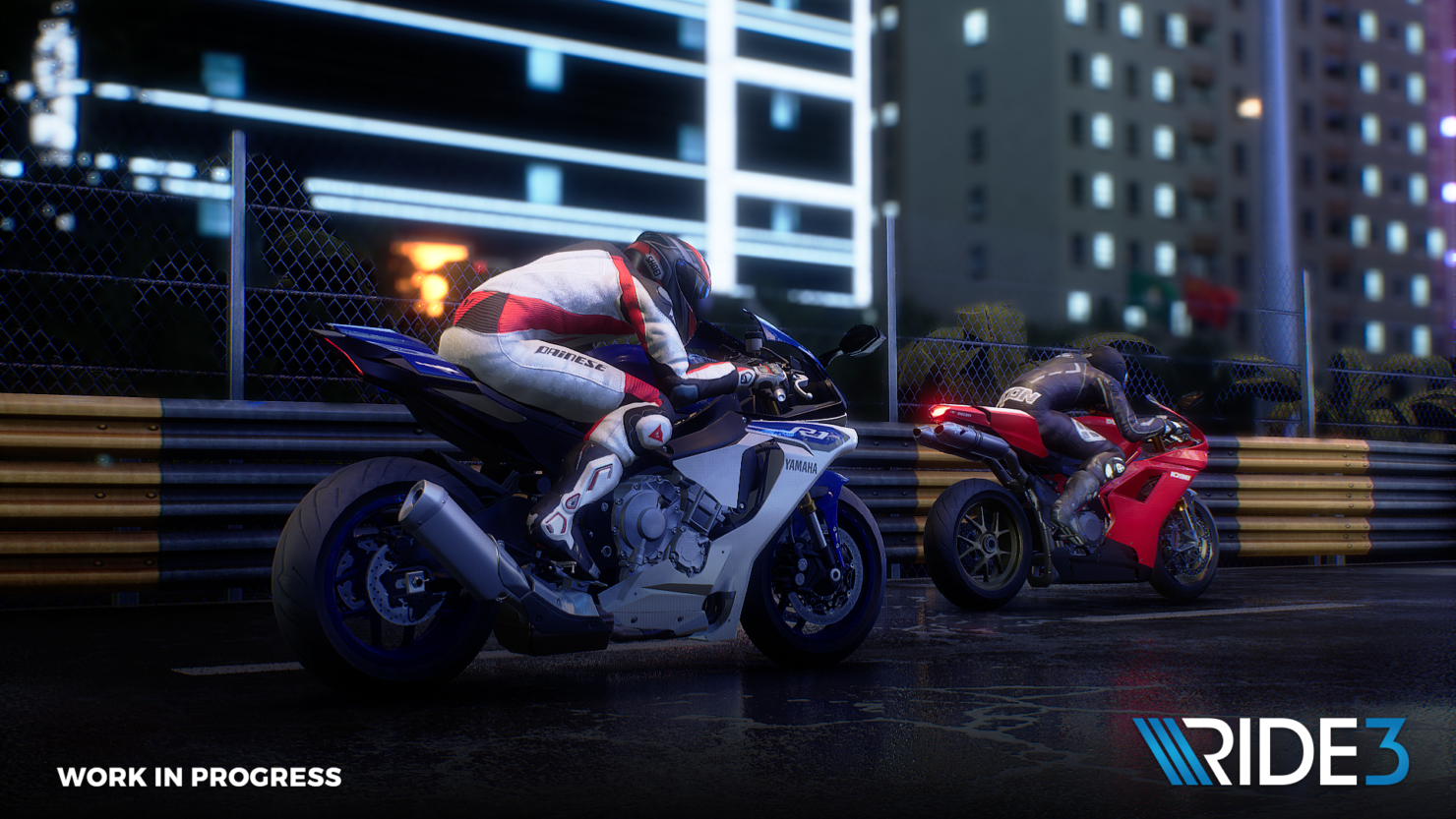 So what exactly is a bikers' paradise? It's hard to say, particularly when it comes to a game. So many games have tried and captured the feeling of getting on two wheels, the freedom it gives you and the power of the machine between your legs. Even Milestone missed the mark with their MotoGP titles. RIDE 2, which I previewed at Gamescom two years ago,  was the best motorbike game around when I reviewed it later that year. This something that Milestone look to further refine and improve on with the upcoming release of RIDE 3. 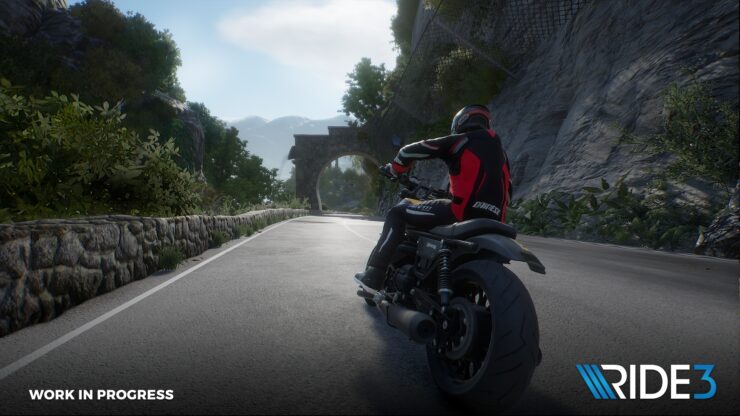 With this new iteration the aim doesn't seem to have been with the expansion of the roster of bikes, but with the races, you can actually compete in. RIDE 2 launched with around 230 bikes of different classes. RIDE 3, as explained to me, will launch with 230 bikes. Following the launch, there be a nine-month support period. During this period an extra 70 are planned for DLC. With the roster not really expanding, it's the focus on how the bikes sound, look and feel that will be the important aspect.

A running trend with Milestone's new releases has been a drastic improvement in AI, aesthetics and physics. As with titles like Monster Energy Supercross and Gravel, this is down to the move to Unreal Engine. Visually, RIDE 3 has a far superior quality to RIDE 2 and is certainly one of the developers better-looking titles. This, however, doesn't mean it's perfect yet - though I was told there is still a level of polish still to be done.

The environments, for example, look great even now. A lot more attention to detail has gone into them, that much is certain. Seeing the waterfalls on Strada Della Forra, around Lake Garda, in particular, looks great. Indeed, from the few races I was able to take part in, Milestone seems to have pushed the environments to the limit. Even licensed tracks have that bit more detail, with visible marks on the tracks and the off-track areas having that bit more detail into them, to add to the immersion.

Much like I was told by the Milestone staff member, there are still aspects that need polishing. One of the more noticeable things was distortion around the bike and rider. While it isn't the biggest issue you could come across, it certainly takes away from the immersion. Particularly so as, if you're like me, you're always going to be looking at the rear of the bike and rider in third person. I did try different camera modes and didn't notice the same issue. Nor does it appear in picture mode, only occurring when the bikes are actually moving. 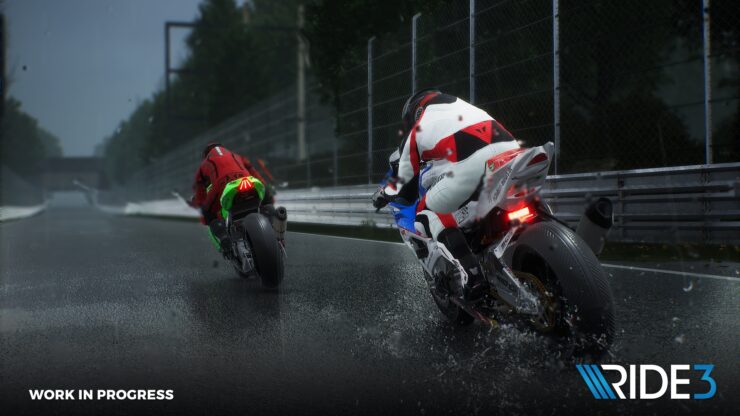 One of the larger changes within RIDE 3 is the campaign itself. Milestone has made a non-linear campaign that is designed around magazines, of all things. So, for example, you would pick up a naked bike magazine and your races would be all using naked bikes and based on them. Maybe you'll jump into a magazine all about superbikes. Understandably, the place you find yourself racing will also depend on the style, theme or age of the bikes (magazine).

Using this change of modes has allowed Milestone to extend the career far beyond that of the previous game. In addition to the freeform campaign, which has over 60 magazines to work your way through, there are other modes to jump into. You'll be able to jump into a quick race, a time attack or race against other people online.

It's racing these modes where you truly get the feel of the game. I only managed to race on a few bikes during my hands-on session with the game, but each felt and sounded unique, showing their differences in acceleration, handling, braking and more. Even the audio has seen an improvement. The few bikes I used looked and sounded fantastic. The bikes show a fantastic attention to detail, every small element recreated. If this continues for the whole roster of bikes, that will certainly be a bike collectors paradise.

What should especially improve it for people who are interested in collecting the bikes is the options for customisation. As with previous titles, you have extensive customisation options - offering more than 500 parts. This includes aftermarket parts like the exhaust, clutch, wheels, cabling and even more. To further extend this, the game will also feature a livery editor for the first time, offering extensive options to let you create and share your very own livery online. From what I was told by game director Luca Cafasso, it will be powerful enough for you to draw the Mona Lisa on the side of your bike.

Racing the bikes also highlighted the improvements that Unreal Engine brings to the game. While I was told that a large number of bikes still need their physics fine-tuning, every single bike will be made to be as realistic as humanly possible. If the same level of detail is found with every bike as with those found in the demo, this will be Milestone's best outing yet.

This is especially true when you look at the other inclusions within RIDE 3. The number of tracks hasn't really been increased, with 30 tracks to be found here. It's the options within these tracks that will fully utilise the new engine, enhanced visuals and fine-tuning of physics. For the first time in the series, there is night-time racing. In addition to this, a variety of weather conditions.

When racing a free race or online, you'll have the option to pick and choose between night and daytime racing at will, as well as changing the weather as you please. Having rode my own motorbike in all weather conditions before, and at night, it will allow for a much bigger replay value than the previous titles. It will also change the way you race dramatically, particularly on tracks that may have less light and visibility. Inevitably, you will crash, but the game still features the option to rewind to rescue it for you.

As always, you also have multiple options of how you would like to ride. Would you like the settings changed for an easier ride? You can easily have that done. Both brakes will work together, there'll be a nice line on the track showing you how fast you should be going for a hassle-free ride. Even the physics will be that bit kinder on you. It'll never be the fastest option, but you'll find yourself crashing a lot less. On more realistic settings though, you'll be controlling the front and rear brakes separately, each change in gear and your timing will matter and if you stray off track, be ready to go to ground and rewind - unless you've disabled that option too. 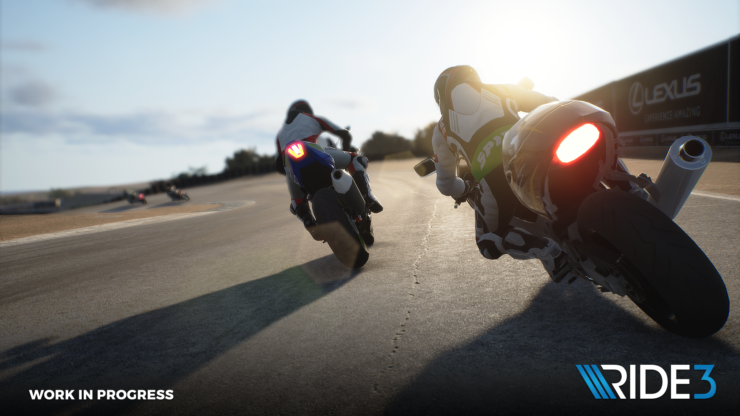 While RIDE 3 may have a few minor issues, it still looks great. Particularly impressive is the attention to detail on the bikes. What is more important is capturing the feel of riding a motorbike. This is something that, every time I talk to members of Milestone, they really want to capture as a number of the team are avid bikers. It's here that they seem to have improved beyond any of their previous titles.

You can read more about it on the official site. Releasing on the PC, PS4 and Xbox One on the 9th of November, you won't have long to wait to take to the track and experience the freedom of two wheels.