I have played too many platformers in my time. As a long-time Nintendo fan, there has never been a shortage of platformers, and no publisher really has such a mastery of what a platformer should be. But it's easy to tire of it all. We're at the point where Nintendo has made so many platformers that innovations in gameplay are pretty sparse, and instead, all they can innovate on is art style. Between the Kirby and Yoshi franchises, Nintendo has experimented with a variety of art styles that can be used in a 2D plane, and after both characters have become wool and another has become clay, Nintendo is going for the Labo-inspired route with Yoshi's Crafted World and giving us environments that look like they were made by children.

But that's not some sort of negative hyperbolic statement - no, these environments actually look like they were made by children. Each element of the stage, each platform, background object, moving piece - everything on the screen other than the enemies look like they were made by an incredibly talented group of kids making an arts and crafts project. That is the goal in Yoshi's Crafted World after all and for the most part, it works brilliantly.

Environments look crafted out of cardboard, or cans, layered with coloured paper, with decorations stuck on afterward. And the fact you can tell that these environments are made out of those materials factors into the gameplay too. It won't be long until you start sticking small magnets to can in order to make platforms or weigh them down. While at first, the art style feels a bit bland, as you progress you can't help but smile at the inventive ways they've "created" the environments, making them all look like areas you can build yourself with enough effort.

Carts you can push, made of cardboard and rolling on bottle cap wheels. Rubber bands wrapped around platforms to bounce you into the air. A bundle of yarn that can be pushed and squeezed to reveal what lies underneath. The interactivity of the world goes further since Yoshi is able to launch his signature eggs into either the background or foreground of stages, you can pick out Shy Guys hiding behind the environment, or get coin bonuses for hitting special items.

The environments are wonderful and creative and kept me playing the game. It's a good thing, too, because the platforming is pretty basic for the most part. Yoshi's Crafted World isn't the toughest game, but it is dripping with charm. It follows the basic level structure you've seen in Mario or Donkey Kong Country, where the designers introduce an obstacle or element in a safe environment, before ramping up the difficulty.

Some stages will see you hopping across ropes over tiny gaps, before making a massive rope climb while dodging enemies. Another with carts has you pushing one to open a door, long before you ride another over broken tracks which force you to jump at the end. It's classic Nintendo platformer escalation, a formula that works incredibly well, and you'll likely recognise it immediately - not that the familiarity is a bad thing, it's still being used for a reason.

Stages get more interesting on a second run through. You are able to collect Poochy Pups from each stage where they're hiding in either the background or foreground. You collect three and run to the end, only this time, the stage is reversed. You go from your original goal, to your original start point, with a reversed perspective. You still run from left to right, just the camera and goal has been flipped.

This also means you see behind the environments that were previously the background, unveiling the cardboard backs, unpainted sides of cans, layers of tape holding the environments together. It's a ridiculously charming touch, making each level worth playing through at least one more time. Not only does this give each stage a bit more replay value, but it also offers players a completely new way to look at the stages.

But of course, Yoshi's Crafted World is still easy. It's clearly aimed at younger players while offering enough for more experienced gamers to enjoy - though collecting all of the smiley flowers feels more like an investment of time, not a satisfying, challenging task. There's an assisted mode for less experienced players, and also co-op. The co-op is nice, though you can ride your friend, giving you infinite eggs to throw, and allowing your pal to cross difficult platforming sections for you. Yeah, it feels like you're supposed to play with a child while walking them through.

It also adds a bit of extra frustration as your co-op partner can, like in the New Super Mario Bros. games, get in the way of platforming challenges, or you can accidentally jump on their back to ruin your jumps. Still, it likely is better than the Mario equivalent thanks to the overall slower pace of the game.

Unfortunately, one aspect where I wish they didn't keep the crafted theme is the music. It also sounds like it was made by children. A child's music group filled with kazoos and recorders. These are functional, but in no way memorable, unlike music from Yoshi's Story. The technical side of Yoshi's Crafted World is a little underwhelming at times too. It's a solid 60FPS for a majority of the game, that's not the problem, it's the resolution and quality of effects like depth of field. Foreground items look fine, but background objects sometimes have a very pixelated blur around them, and it's unsightly. The lower resolution can be very obvious in some scenes too. These, for the most part, do not detract from the lovely environments, but it is noticeable. 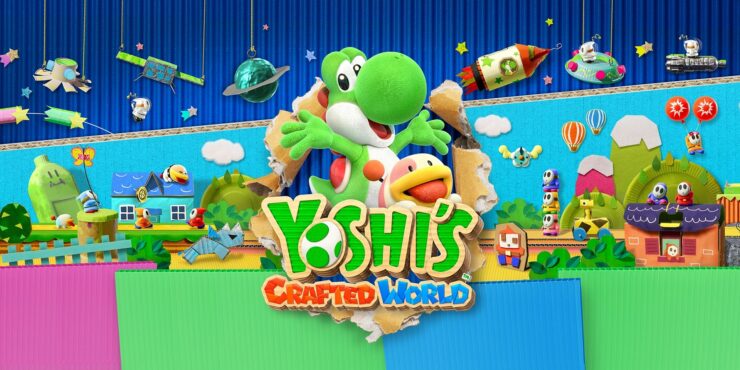 Yoshi's Crafted World is a game utterly dripping with charm, but not that much challenge. It definitely can keep experienced and younger gamers occupied for hours, but this isn't a Switch essential. If you've got a soft spot for the green dino, then this might be worth your while. A great game for kids and younger gamers, but if you're looking for a challenging 2D adventure, this ain't it, chief.