As the flagship title to come from newly formed Giant Squid Studios, Abzû trades the dusty hills of Journey’s desert landscape for a trip beneath the blue waves. Released on both the Windows PC and Playstation 4, this deep sea exploration follows in the footsteps of Journey. As beautiful as the seascape is to explore, not everything is as it initially seems. There will be some spoilers as to what mysteries are concealed deep in the sea, so tread carefully if you want to keep Abzû’s enigmas a secret until you can enjoy it for yourself.

To properly enjoy Abzû to its fullest, one has to disregard any preconceived notion of what is required to be a game and rather allow oneself to become immersed in the journey. There’s no high score to achieve, no boss battles to endure. Instead, Abzû should be experienced as an exploration of the deep blue sea and the rich bounties that the sea contains. By focusing less on reaching the end and instead focusing more upon the journey itself, the colorful wonders of Abzû become all the more promising.

Abzû’s actual gameplay can be broken down into a simple component: unlocking gates. Throughout the exploration of the ocean’s diverse biomes, exploring and finding the various contraptions that are blocking progression mark the few elements of what make up the experiences that aren’t enjoyed at the player’s own pace. Return trips to the game’s diverse areas can be achieved by discovering meditation statues, each one marking a point of return from Abzû’s main menu if players wish to explore a particular section or search for the various secrets hidden away.

Matt Nava, previous art director for both Flower and Journey, contributed to the game’s richly detailed art style. Opting away from the realistic look of titles such as Endless Ocean, instead Abzû goes for a color-rich impressionist art style. Hundreds of fish flow together in schools, each with their own diverse array of colors. The numerous moments in Abzû when the aquatic seascape is filled with a plethora of schools of fish are some of the most impressive sights on the Playstation 4, even if the graphics don’t aim for a realistic style. Austin Wintory’s calming music adds to the experience of diving beneath the sea.

For those looking for a reason to jump back in once the credits roll, Abzû features a number of little collectibles tucked away in the scenery to discover. Glowing ammonites hidden in the environment mark the primary sort of collectibles. As these are completely optional, they’re not necessary save for decorating the final point of each zone. Miniature holding pools also keep secrets just waiting for the player to discover them. In each pool is an animal species that’s been taken from the mother ocean. By interacting with these pools, the creature within is released and added to the ecosystem, thus filling the ocean with more diverse life. Many of these are entirely optional, but a great number of them are found naturally within the player’s path of progression and more so if players take the time to explore each of Abzû’s wonderful depths.

Also scattered throughout the depths are large monolithic statues of the great white shark, the terror of the deep. By interacting with these statues, one can use these as checkpoints for a later return trip into the sea. However, the monoliths also hold another secret for those that want to enjoy the aquatic world of Abzû. The tops of these statues are perfect for meditating and enjoying an out of body experience. Players can transfer their mind into one of the many species of fish and aquatic life and follow them around as they swim in packs or contribute to the ecosystem’s food chain. Sometimes I would meditate and take the form of a dolphin and just chill  out and watch the ocean’s citizens interact with one another. It was during these zen-like moments that the true beauty of Abzû shone through as more than something to be treated simply as a game.

Abzû explores a deep relationship between the player and the great white shark, king of the sea. From the beginning of one’s journey, the shark embodies the horrors of the deep, creeping in when least expected to shock the player or bringing concern that the player might be the next thing on the menu.

From the machinations that humankind has dropped into the ocean comes turmoil to all those that reside beneath the waves, both diver and shark alike. These tribulations that the player must endure can radically change the dynamic between the two, giving change to the way the player perceives their relationship with the great white shark that’s been living beside them from the journey’s beginning.

Along the journey, Abzû’s wordless narrative expands into Ferngully-esque tale of humanity’s impact upon these fragile ecosystems. The deeper the player progresses, the more that humanity’s selfishness destroys what once were thriving and flourishing biomes, replaced instead with bleak grayness, animal bones, and explosive mines meant to hinder the player’s progression. Long forgotten buildings beneath the waves hint at a civilization that once thrived with human life that has since become home to coral and fauna alike. Even after mankind has been washed away from the vast waterscape, lingering effects of their destructive effects, including mines that can damage, yet never kill, the player. 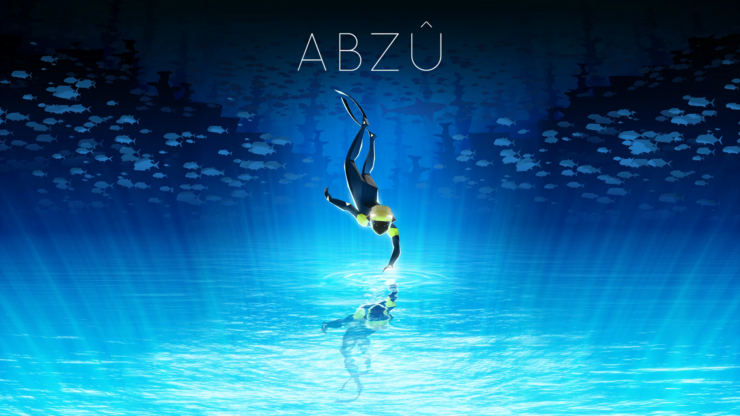 For those looking for a narrative journey that’s unlike anything else on the Playstation 4, Abzû offers plenty to experience.