Contrary to so many JRPG’s, the main character of The Last Remnant Remastered, Rush Sykes, is rarely the focus of the story. Born the son of a pair of Remnant researchers and on a mission to rescue his kidnapped sister, it’s a rare story that doesn’t involve dead parents or an inexplicable bout of amnesia to get the adventure going. It isn’t long before Rush Sykes (literally after the first battle) that Rush is taken up by the leader of the city-state Athlum and brought into their care as an adventurer that can hold his own while largely going along for the ride. If it weren’t for Rush’s lineage being so entwined with the Remnants that grant the beings of the world extraordinary powers and combat prowess, he’d largely be a side character to the story. Much of the story to The Last Remnant Remastered instead focuses on Lord David as he navigates through the political intrigue of trying to make Athlum into more than just a city-state and into a nation all its own.

The Last Remnant Remastered’s party isn’t just a plucky group of four young brats wanting to change the world. No, you’re looking at a much greater multitude of that. Turn-based combat revolves around forking your individual party members into a squad of up to five unions (a smaller number of compact unions is great for damage dealing, or maybe you want a union of a pair of healers that do nothing but keep the frontlines alive) and eventually you’ll unlock the capabilities to bring a total of eighteen party members to battle. Only a small number of those characters you’ll fight alongside are focused in the story; the remainder are recruited from various guilds across the world, usually for a modest sum of gold and the best leaders requiring a side quest to be completed before they’ll render their services to Mr. Sykes.

When it comes time to fight for your lives, you won’t be issuing individual commands to those troops under your service. Instead, the unions will tell you what moves they’d prefer to do as a complete union, a mechanic I rarely see in JRPGs that aren’t named Criminal Girls. Just because you include a caster in your party that would work best casting hexes upon the enemy unions every turn doesn’t mean they’ll opt to use that skill each and every time. However, there’s a careful bit of party management to subconsciously coax party members into working in your favor, such as including more troops that specialize in that particular discipline of magic or making that spellcaster the leader of the union. It can be frustrating at times when you have a healer in the union that could keep everyone else alive but would much rather beat on the enemy with their staff and there’s not much you can do besides try and change your target in battle and hope that the healing skill comes up in a different list of battle commands.

Quite a bit of the finer systems to The Last Remnant Remastered are explained to the player in limited detail. One such offender is losing access to quite a large number of side quests throughout the story if you aren’t paying attention to clear them out before the next main storyline event. I ran into at least three such instances throughout my full clear, and if I wasn’t resorting to using a ten-year-old guide to help plot my adventure, I would’ve missed out on them just because I went to one specific room in a dungeon and triggered what would’ve been a swap to the next disc in the 360 era.

Another such incredibly difficult concept for newbie RPG players to tackle in The Last Remnant Remastered is in regards to the Battle Rank. Rather than having traditional levels, the Battle Rank, or BR, is a rough approximation for how the game considers your power levels to be based upon Rush Sykes’ current power. As this raises, so too does the danger of running into much higher leveled foes that you might not be statistically prepared for. In order to make the most of leveling your squad in The Last Remnant Remastered, grinding is a task that should be avoided rather than sought after. Instead, it’s often most efficient to take on the hardest enemies you can and artificially limit your power with squad formations that reduce their stats or linking together as many enemies into one fight as possible. By doing this, you’ll see individual stats raise in a multitude greater than tackling weaker enemies that might go down in a single turn. The crux of character development takes a few pages from the SaGa series: stats that are actively used are often the ones boosted after combat and repeatedly using skills will not only raise their numerical efficiency but lead to higher tier skills that can be so much more effective than their lower ranked counterparts. By the time I was about ready to face the final boss, my BR was in the low-50’s, perhaps half of what it would have typically been with some inefficient grinding.

It’s been a decade since I last tried to break into the unusual combat and character systems of The Last Remnant when it first came out at launch. To put it bluntly, the original release was pretty awful. Released before the Xbox 360 could allow you to install games to the hard drive, the performance was memorably poor. Loading times, sluggish animations, and so many other performance issues made the experimental JRPG a chore to play through. This was long before the addition of Turbo Mode that drastically increased the pace of combat which was first introduced in the PC port.

That same PC port added in a plethora of changes and quality-of-life enhancements that easily boosted the review scores of The Last Remnant by a full letter grade and then some. Equipment and stats were readjusted in plenty of positive ways, arcana and weapon arts got a massive overhaul, and most significant of all, any recruitable soldier could lead a Union into battle, giving generic soldiers like Liza and Wyatt the ability to truly shine in combat. All of these changes eventually made their way into the PS4 remaster and remain the bulk of what’s new, as the PS4 and PC versions are largely similar in terms of content with only graphical and audio settings keeping the two apart.

Strangely, The Last Remnant Remastered doesn’t feature the dual language support of the PC version, or at least not in a conventional way. I tested through my PS4 system settings and found that the only way to enjoy The Last Remnant Remastered with the Japanese dubbing was to force the PS4 to operate in Japanese from a system level setting. The obvious downside to this was that not only does it turn your console OS to Japanese but the written text to The Last Remnant Remastered as well. If you’re looking to bone up on your Japanese literacy, this could be a good training tool, but for the average JRPG fan that hasn’t worked their way up to a sufficient JLPT proficiency, this does defeat the purpose of having a proper dual-audio release.

In comparison to The Last Remnant’s PC release, and even that of Square-Enix’s remaster of Star Ocean: The Last Hope last year, this month’s release from Square-Enix lacks much of the graphical settings that previous titles boasted. Even on the PlayStation 4 Pro, there are no options to change resolution, frame rate, texture quality, or even some of the more common PC settings such as shadows and view distance. It’s a sort of One-Size-Fits-All solution that helps The Last Remnant Remastered run at the equivalency of Medium-High on PC. There’s the usual bit of pop-in that’s present in a great number of Unreal Engine titles but it’s only present when first loading into zones, not transitioning from field to battle and back again.

For the most part, The Last Remnant Remastered keeps its frame rate up on the PS4 Pro, although it doesn’t feel like it comes close to 4K60, except for when Turbo mode is running in the battles (and even then, it could just be the faster animations that give the illusion of a stronger frame rate). There still remains a bit of letterbox during story conversations, but the Native 4K presentation on PS4 Pro and most of the textures and character models look improved from even the PC release. Of course, the faces still look awkwardly uncanny at times and nothing short of rebuilding the character models from scratch could have fixed such a minor issue.

The Last Remnant Remastered doesn’t do much to show that its a full remaster; nevertheless, the PlayStation 4 version is now the de facto definitive edition (partly due to the PC release being delisted from Steam). It’s not nearly as ambitious as Square-Enix’s previous work with Star Ocean 4 but instead does enough to make such an experimental JRPG work with a new rendition of the Unreal Engine. Much of the mystery to combat and questing has long since been solved and guides exist that cover every minute detail to how Rush and company can save their world from being overrun by The Conqueror. Without those guides, The Last Remnant would be remembered as the last of its kind: a deceptively complex JRPG that evokes memories of the SaGa series, brought forth to a new console generation.

Review code provided by the publisher. You can purchase the game digitally via Sony's PlayStation Store. 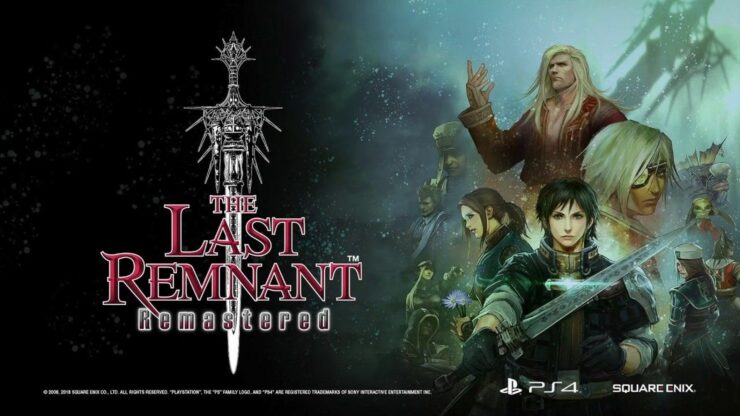 Born of experimentation and a combat system quite unlike anything else from its time, The Last Remnant Remastered takes all of the PC enhancements and balance changes that were never previously available on console and adds in a few graphical filters to appeal to another generation of console players.