Here’s the deal right away. I don’t believe that The Gunk is an experience that will fit everyone. It’s an action-adventure game that, in my opinion, prioritizes the “Adventure” aspect over the “Action.” No, it’s not a walking simulator, as people will inevitably infer from reading this first paragraph, but it’s also not going to give you a run for your money in terms of mechanical skill.

The Gunk certainly shows its commitment to bringing an adventure through its linear story and visual design. It’s going to mostly spend time trying to wow you with dazzling visuals and cool 3D environments as you traverse through the planet and slowly clean it up from the crimson ooze that is enveloping it and discover the mystery behind its corruption. 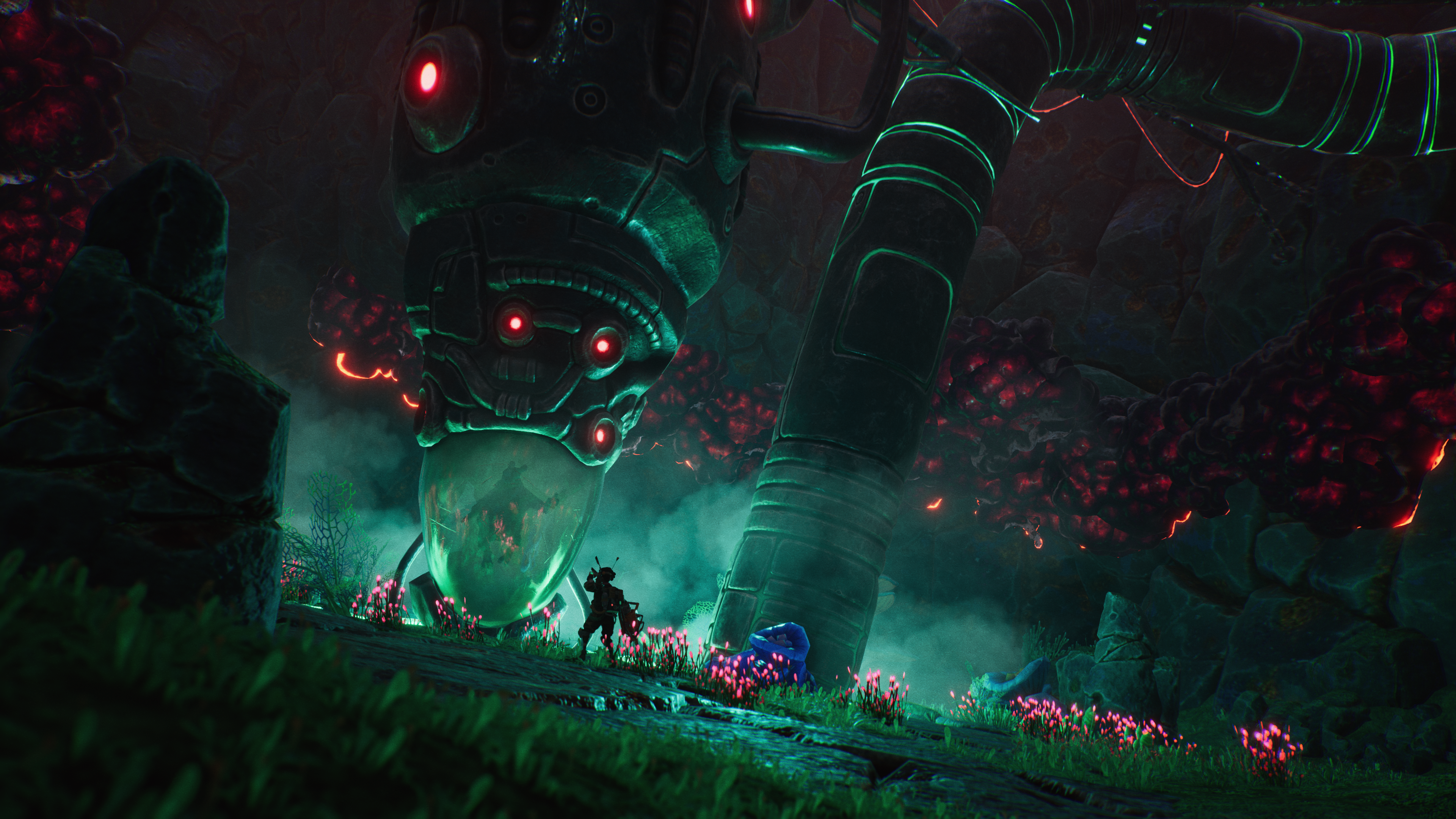 But, what’s this game’s story? Well, in The Gunk, you take control of an optimist and somewhat naïve spacewoman named Rani. She’s a very impulsive and adventurous character. She mostly goes with her gut with most of her decisions and helps everyone she can, even if it endangers the mission she’s currently trying to do.

Supporting Rani is the more “Let’s play everything by the book and get out of here asap” kind of character known as Becks. She’s way more reserved and wants to stay at the spaceship that she shares with Rani. Both essentially came to this unknown planet due to an energy signature, hoping that it might lead to some valuable treasure that would rid them of their debt.

However, as they land on this planet, they see that vast chunks of black ooze are siphoning its life. You could say that it’s being killed by… The Gunk. Rani finds out that by clearing the ooze with her trusty bionic arm (affectionally referred to as “Pumpkin”), life comes back to the planet as once dark and sterile environments get filled with greenery and light.

This is where the “Action” in the game stems from, by the way. The game takes on a “Cleaning Simulator” approach where you use your super glove to vacuum all of the Gunk away from the planet’s sections. More often than not, your way to progression is locked until you clear up all of the oozes. 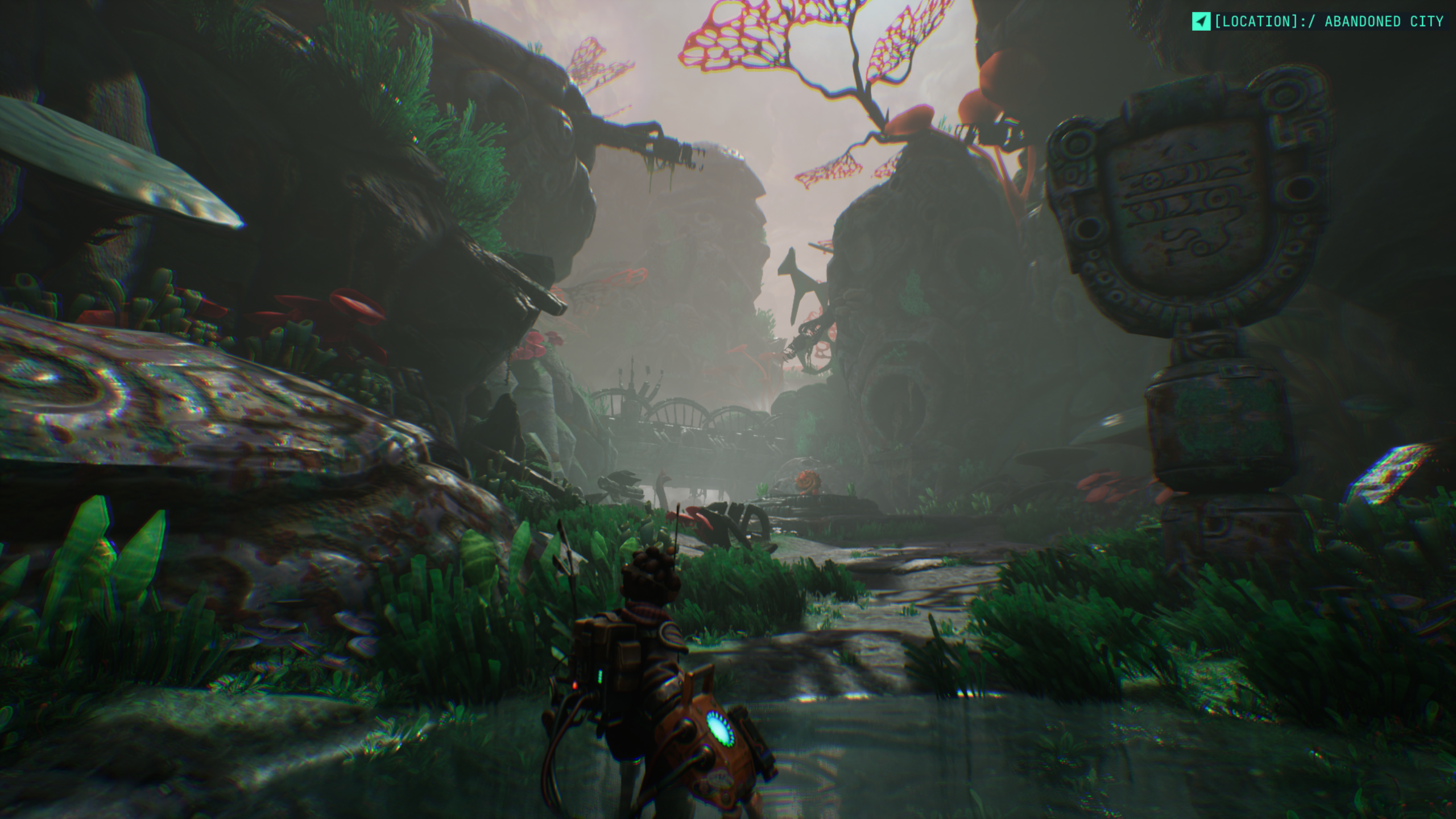 Of course, the dark blob isn’t going to let you get away with doing your job as a planet janitor so easily. As such, it will throw whatever it can at you to stop you. Did I make it sound like it was too demanding? Yeah, you have to deal with only three types of enemies, and most of them don’t pose much of a threat.

They are annoying to deal with when it comes to the numbers game, as is every “Thousand cuts” situation. But they tend to be relatively easy to deal with and sometimes even ignore on their own. I’m not kidding when I say that I’ve unintentionally dealt with some of those enemies while focusing on cleaning up the Gunk.

My beef with the game is that it seems like you’re playing a tutorial, and it’s building up to something grander in terms of enemy variety and design. However, before something even greater begins, the game anticlimactically ends, and that’s all she wrote. The upgrades almost always feel like they bring nothing of substance (barring a few exceptions I’ll talk about below), and the enemies are dealt with reasonably quickly.

The upgrade system is the one that disappointed me the most. Some of these upgrades are actually neat, like the ability to gain a speed boost depending on how much Gunk you clean up. However, most of them either exist for the sake of helping you progress through the game or won’t have any lasting impact like the “Running” upgrade, which feels like Rani’s faster version of this “Haters gonna hate” strut. 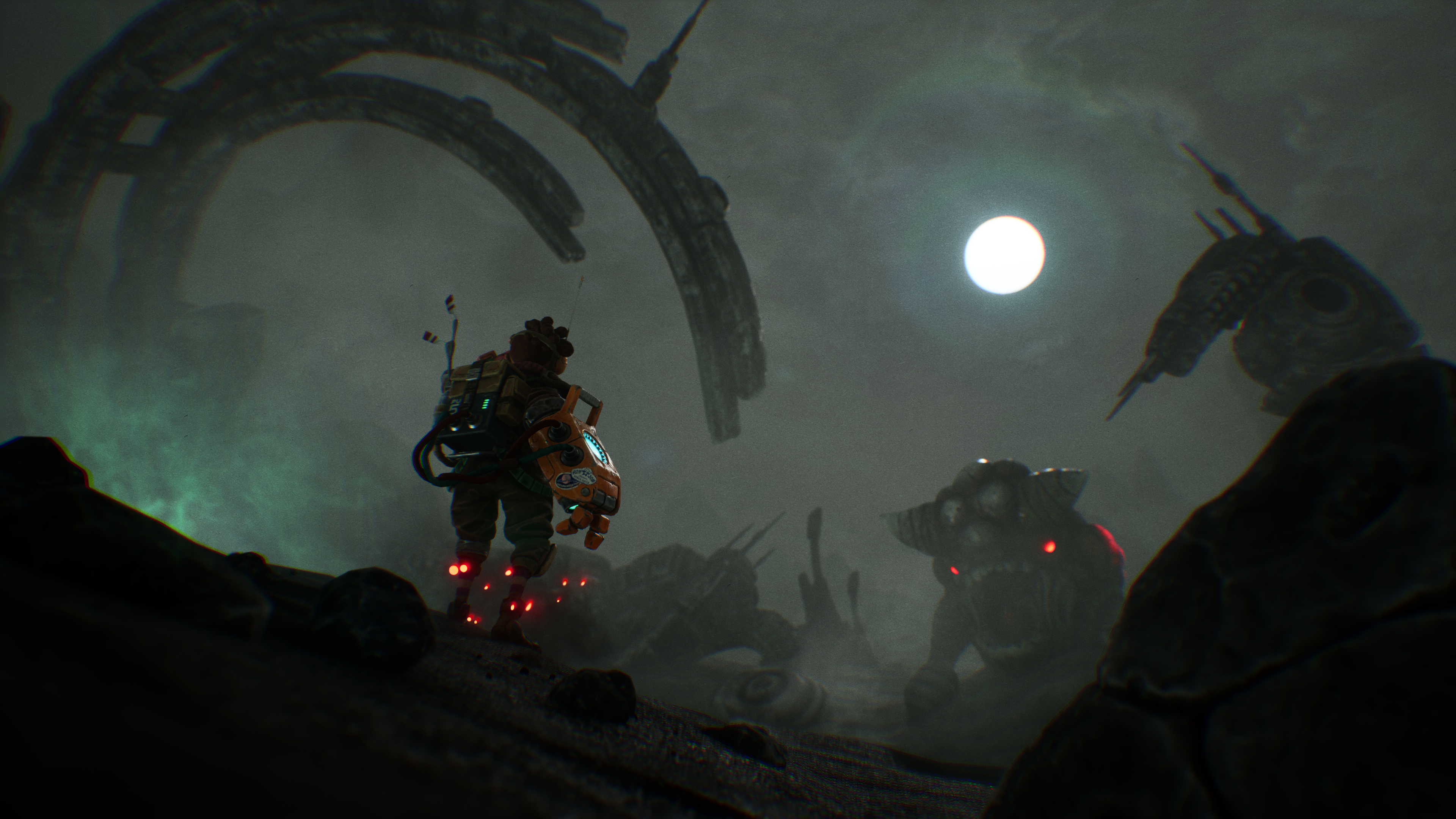 To get the upgrades, you have to constantly explore your surroundings to fetch resources like Metals, Fibers, and other kinds of materials to craft them. Most of these materials are found after you clean up the section’s Gunk. I’ll give the game this; it certainly rewards you for going out of your way to explore and check every nook and cranny.

However, I feel like the rewards themselves are not exactly fulfilling. The upgrades to Pumpkin should’ve been put in some hidden spots in the game instead of this streamlined process of gathering resources and crafting them. Sure, their impact on the overall experience might still be questionable, but at least it would’ve been cooler to find the upgrade rather than crafting it.

I’m even purposefully dodging the game’s scanning mechanic because it gets thrown to the side rather quickly. I thought that the fundamental exciting part about The Gunk would be cataloging all of the flora and fauna that the player would come across. I guess I was wrong because the player can catalog most of it from the beginning of the game.

But what’s worse than a game with a lacking gameplay loop? Well, how about one that doesn’t work properly 90% of the time? Throughout my experience, I’ve had to encounter many stability problems. Most of the time, I ended up being met with game-ending crashes that were annoying but bearable thanks to the game’s checkpoint/autosave system.

When it comes to dealing with crashes, it majorly ends with me having to take a few steps. However, what I can’t get behind is when the game rewards my basic sense of exploration with Rani getting stuck in the level geometry. This is especially aggravating when it happens after you cleared a massive chunk of Gunk only for a giant mushroom to spawn right above you and trap you underneath, forcing you to reset and start the cleaning process all over again. 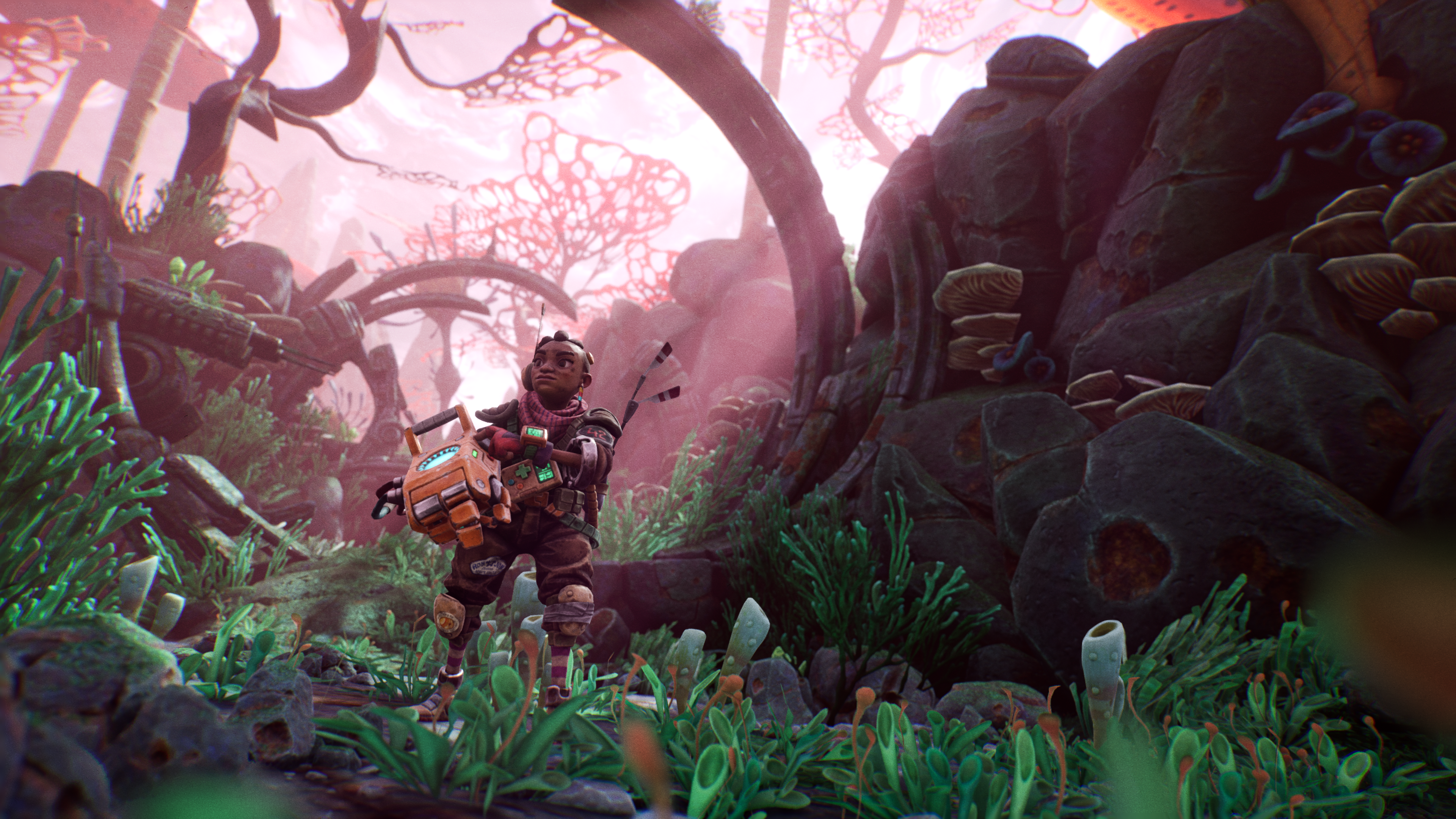 To be honest, I expected a far more fulfilling experience from the team that developed the Steamworld series. I get that this is their very first 3D foray, and they are using The Gunk as a learning experience. However, I feel like they already nailed the feel of how players would like to be rewarded when going out of their way to explore the deepest corners of the map (that’s Steamworld’s point, after all).

Image and Form seem to have put the game experience on the side to focus on the more narrative aspects of the game, which are pretty good to the dev’s credit! I like the dynamic between Rani and Becks, and the plot itself kept me invested in the mysterious atmosphere. I was sucked (pun intended) by the game’s soap opera-level dramatic interactions between the protagonists and the overall feeling that you’re solving a mystery behind the deterioration of an entire planet.

The game’s visual aspect is just chef’s kiss levels of beautiful, too. It feels rewarding to clean up all of this Gunk to then be met with an explosion of flowers, greenery, and just nature coming back to the world. That, at least, gave me the incentive to keep going and exploring. You know how there’s game concept art that looks stunning enough for you to want to be part of it? The Gunk makes me feel like I am in one of those beautiful pieces of concept art.

However, I doubt these positives will carry the game’s overwhelming negatives. The lack of variety in the game’s enemies, flora, and overall variety makes me feel like there’s no real incentive behind exploring; then there’s the fact that you can easily get stuck because you dared be in the wrong place at the wrong time; and, of course, the borderline repetitive gameplay loop. It just adds up and makes me want to play something else.

It’s a case of how beautiful visuals don’t make up for the game’s other flaws. However, I think that Image and Form used The Gunk as a learning experience to give us a much more engaging game that retains the positives that it brought. So, at the very least, I am happy to recommend this game to any adventure enthusiasts who want to clean up some dirt with a vacuum cleaner. Just mind your head.

The Gunk is a rather visually stunning experience with many drawbacks that prevent it from scoring higher. While it has some noteworthy high points, it also has some devastatingly low points that show that Image & Form Games are just dipping their toes into 3D world design.