The Dark Eye: Book of Heroes

Computer role-playing games have gone through a sort of renaissance in recent years, a renaissance that led to the release of some excellent titles, like Obsidian Entertainment's Pillars of Eternity and Tyranny. Sadly, despite some interesting mechanics on paper, The Dark Eye: Book of Heroes doesn't belong in the same league as them.

The Dark Eye: Book of Heroes is a digital adaptation of a popular German role-playing game. Like in Dungeons and Dragons, the continent of Aventuria is populated by humans, orcs, halflings, dwarves, lizardmen, and all manners of fantasy creatures one can think of. Not the most original fantasy world around, to be sure, but a promising one for an old-school RPG.

Unfortunately, the game doesn't take advantage of its setting in any interesting way. After creating your character, you are thrown into the Black Boar Inn, where you can recruit adventurers, power-up your character, stash your items and pick between different missions set in a variety of honestly generic locations like forests, caverns, ancient ruins and so on. Outside of the generic design of these locations, the main issue is that the game does very little to make you care about the world. Everything feels empty, devoid of purpose, mostly due to the lack of a strong narrative.

It's a shame because The Dark Eye: Book of Heroes definitely starts off on the right foot. Character creation is definitely among the game's strongest suits, as it allows players not only to pick species, profession, and origin, which influence stats and abilities but also a Twist of Fate, the event that changes their life forever, their Ideal and their Mission, which influences the character's personal journey, giving a semblance of a narrative to follow. The Missions are mostly generic fantasy fare, but they could have made a big difference, had they been properly developed, as they just result in overarching objectives to complete during quests and narrated passages that detail the next story objective.

The lack of a real narrative is just one of the many things that make The Dark Eye: Book of Heroes a bland experience. The role-playing game mechanics are here in all their glory, and they are complex enough for any fan of the genre to sink their teeth into. There are also a couple of unique status effects and mechanics that do require checking out the tutorial accessible through the inn's library to be fully understood. The problem is that the gameplay loop is terribly uninspired: like in all classic cRPGs, you will venture out in different dungeons, fight a lot of generic enemies in a classic real-time battle system where the action can be paused at any time, collect loot, complete the objectives, possibly moving your personal story forward, collect the key to leave the dungeon and return to the inn, rinse and repeat. It truly is the most basic execution of cRPG mechanics ever seen in the past few years.

This is not to say that everything in The Dark Eye: Book of Heroes is generic. Staying true to its tabletop roots, the game constantly shows dice rolls, which is a nice touch even though it does not change the experience all that much. There's also a Perception check that allows players to know if there are enemies in the next map tile, and the ability to rest at any time to restore HP, a mechanic that can be used to make everything a little more challenging, as enemies are augmented every time you rest and can possibly even spawn near your characters.

Completing quests will reward players with Adventure Points and progression cards, which are both used to improve your character by using the Fortune Teller's services at the inn. On paper, the progression mechanics grant a huge amount of customization options, but the system is extremely limiting due to the fact that cards are obtained semi-randomly, thus limiting your options unless you grind hard. Coupled with the generic combat system that requires so little input from the player, as hired AI companions cannot be controlled directly, this effectively kills any enjoyment you might have had, an issue that is only slightly alleviated by the multiplayer mechanics that allow up to four players to adventure together.

Dungeon design, unsurprisingly, is as generic as many of the game's features. The procedurally generated dungeons feature the usual amount of traps, loot, and enemies you would expect, and a few very simple puzzles to complete. There are different mission objectives, to be honest, but boredom sets in fast, also due to the unremarkable visual design.

As if all this wasn't enough to make The Dark Eye: Book of Heroes feel like an Early Access game, the game also has some technical issues, and a few bugs. Optimization is also not good at all, as there is no way that a game with such simple and undemanding visuals cannot run at 4K, 60 FPS on a system featuring an i7-3770 CPU, 980 Ti GPU, and 16 GB RAM.

The Dark Eye: Book of Heroes feels like it needed a lot more time in the oven to be good. The blandness of the entire experience makes it difficult to recommend to any role-playing game fans, even the most hardcore, and it is a shame, as some of the mechanics are rather interesting and deserved to power a much better game. 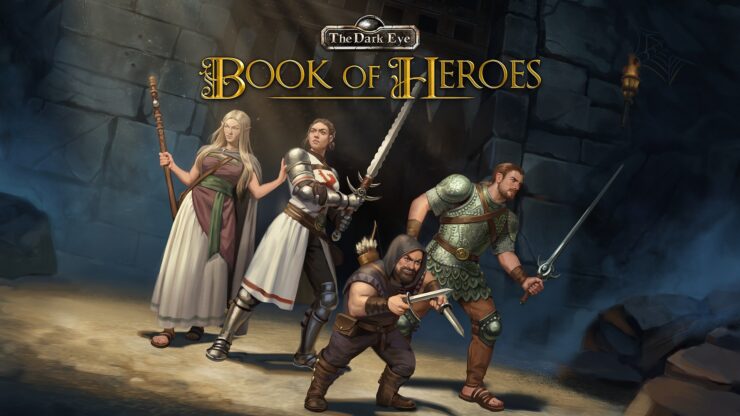 Despite some interesting mechanics that make the game feel like a true adaptation of a tabletop RPG, The Dark Eye: Book of Heroes is a cRPG that needed a lot more time in the oven. With some technical issues to boot, it is really impossible to recommend the game in its current state to any type of RPG enthusiast, as there are classic and modern games that offer much better experiences.

Steam Deck Production Ahead of Schedule, Valve Already Getting Started on Q4 Reservations