Back in 2015, Obsidian Entertainment released what is probably one of the best cRPG ever released, Pillars of Eternity. The Kickstarter-funded RPG was very successful thanks not only to nostalgia but also to how the team twisted some of the genre's tropes to create a truly memorable experience. Creating such a game wasn't enough, apparently, as publisher Paradox decided to do something that very few teams dare to even try: bring a cRPG to consoles, an incredibly difficult feat due to the complexity of these games. Does the controller alone beat the mouse and keyboard alliance? Not quite, but it really gets close.

Pillars of Eternity has finally hit PlayStation 4 and Xbox One as Pillars of Eternity: Complete Edition, which includes the base game as well as full The White March expansion, allowing players to enjoy all the content that has been created by Obsidian without having to purchase anything separately. Not being a particularly demanding game, Pillars of Eternity runs well on PlayStation 4 without any major issue, but performance is not the biggest concern in this regard. Controls definitely are, but Paradox Arctic overcame this hurdle in some rather clever ways.

As those who have played any cRPG in the past twenty years or so surely known, this type of game requires players to keep track of a variety of things between characters on screen, menus and so on, making it difficult, as if not even impossible, to play on a controller. While playing Pillars of Eternity: Complete Edition on PlayStation 4 is not as smooth as on PC, the development team did an excellent job in translating mouse and keyboard controls to the Dual Shock 4. Most, if not all, the most common actions can be performed with a select button combination, like selecting one or more character, access menus quickly and more. To streamline combat menus, the team implemented a combat wheel where players can use Skills, change Weapon Sets on the fly and more. Getting used to these button combinations isn't the most natural thing around, especially if one has played the game already on PC, but it honestly doesn't take long to perform all required operations with a controller as quickly as with mouse and keyboard. The redesigned UI also makes everything better suited for viewing on a TV.

With the controls concerns out of the way, it's safe to say that Pillars of Eternity: Complete Edition is just as enjoyable as it is on PC.

Right from character creation, it's clear that Obsidian's cRPG wanted to do things differently. Alongside some expected choices, such as basic fantasy races like humans, elves and dwarves, Pillars of Eternity: Complete Edition allows players to create characters belonging to never seen before races like the aumaua, aquatic humanoids, orlans and godlike. The race selecting process is made even deeper by the sub-race selection, which influences the game as much as the main race does. The same happens with classes: alongside your typical ranger, fighter, wizard and so on are two classes which are the most interesting of the bunch, the powerful magic focused class Cipher and the bard-like class Chanter. Creation is rounded up by the ability to choose the character's background, another choice that will subtly influence the game. Character creation possibilities highlight how Obsidian tried, and succedeed, in twisting the typical D&D rules and mechanics to offer something new. It also highlights the power of choice players have in the game, as all the steps in character creation allow players to even make wizards that can competently fight with weapons and so on.

Choices made during character creation will matter greatly in the story as well and not merely in battle. NPCs will react differently to the character's race and background, opening up some possibilities not available with other types of characters. The main story, however, remains pretty much the same. During a journey to the Drywood, the player character is the only human of the party to survive the magical storm known as Bîaŵac. After this experience, the character's soul has awakened, becoming a Watcher, one of the few beings who are able to see people's past lives by seeing their souls. After this event, the main character finally reaches the Drywood, a place that's plagued by a mysterious curse called Waidwen's Legacy which causes babies to be born without souls. Thanks to the newfound powers, the Watcher gets in contact with another, who instructs him to seek out the reason for their awakening as Watchers.

The search for the truth is made much more engaging by how the world is built. Each area of the world comes with its own history and traditions, which influence how its inhabitants react to the main character. One thing seems common, however: the distrust towards animancers. As they are mostly involved with matters of the soul, animancers believe they are the only ones that can dispel the curse and heal those born without souls, leading them to believe that anything they do is justified, such as placing animal souls into soulless beings and so on. This doesn't make them particularly loved, leading to a cultural conflict which is not that different from the science versus religion conflict of our world. Pillars of Eternity may be set in a fantasy world, but there will be plenty of times when players will be brought to think about issues plaguing our own.

During the course of the journey, which is going to last quite a long time, players will be reading a lot of text. Pillars of Eternity is one of the wordiest RPGs ever released, so those looking for more action than reading may have a hard time enjoying the game. Those who enjoy reading, however, will find a game that does an excellent job in building its characters and world, with everything feeling extremely coherent and believable. The multiple choices available in dialogues not only influence the direct outcome of the conversation but also the character's reputation and affinity with a specific faction, leading to more consequences down the line. If you're looking for some real roleplaying, Pillars of Eternity: Complete Edition is the game that can satisfy your needs: you can choose to be whoever you want, and the world will react in a believable way whether you aspire to be a renowned hero or the worst rogue ever seen.

The actual Pillars of Eternity: Complete Edition gameplay feels quite solid as well. During the course of the game, players explore a variety of locations and fight enemies in a real-time battle system where characters can perform attacks with their equipped weapons, use skills and spells and more. As battles can get quite hectic, the game features a pause system which allows players to pause the action at any time to issue orders, change weapon sets and so on. This proves to be especially important when players decide to control all characters by themselves, instead of relying on the Battle AI, which is, however, competent most of the times.

As with the huge amount of text, Pillars of Eternity: Complete Edition's combat doesn't make it a game for everybody since it's very challenging even at the normal difficulty level. Depending on your current party, which can be augmented by hiring characters at the Inn, the learned skills and the enemies you are facing, battles play differently, and there's never a sure-fire strategy that can be employed at all times. Interestingly enough, players are sometimes better rewarded by avoiding conflict whenever possible, as experience points are not granted after battles but only when completing quests and more. Gameplay is spiced up by a deep and involved management sort of side-quest which sees players defending their stronghold against thieves, bolstering defenses properly and more. The stronghold also hides the game's most dangerous dungeon, filled with strong enemies, excellent loot and a very interesting surprise in the final area.

Pillars of Eternity: Complete Edition doesn't just play great, but it also looks very nice. The game's presentation is a callback to older computer role-playing games, with an isometric-like camera and great looking 2D style which gives life to the world and characters. The soundtrack is also quite appropriate, underlining the somber atmosphere that permeates the game. There's also a limited amount of voice acting which helps bring some of the most important characters to life.

Pillars of Eternity is one of the best role-playing game released in recent times, and the Complete Edition is well worthy of its name, with a redesigned UI that managed to make the game playable on consoles. The huge amount of text and the challenging battle system make it a game that's not exactly for everyone, but those who can look past these potential issues will find an RPG that will suck them in and won't let go easily, thanks to the excellent world building and story.

PlayStation 4 version tested (review code provided by the publisher). You can buy the game on Amazon. 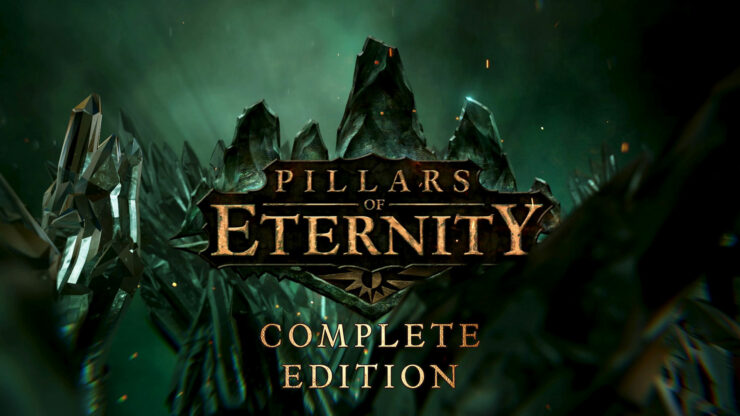 With Pillars of Eternity: Complete Edition, Paradox Arctic managed to do make a computer RPG playable on consoles with little frustration, thanks to the cleverly redesigned UI and controls. For the rest, Pillars of Eternity: Complete Edition is just as great as it is on PC, with excellent writing, world-building and characters, an involving and challenging battle system, and true roleplaying.