The Dark Crystal: Age of Resistance Tactics (official site) is a turn-based tactics game in the same vein as series like Disgaea, with a dash of Final Fantasy Tactics and other similar series. This is also the third game based on a Netflix series that I'll have played in a little over half a year, with Stranger Things 3: The Game and Narcos: Rise of the Cartels being the other two. Having been developed by BonusXP, developers of Stranger Things 3: The Game, I came in with certain expectations. The question then is, did they meet them and is this a good game for fans of the show and of turn-based tactics games?

Not really. I can't exactly say The Dark Crystal: Age of Resistance Tactics is a terrible game, it's certainly better than Narcos: Rise of the Cartels, but that isn't exactly saying much. When I previewed it, I was going from the place of somebody who likes Dark Crystal and was looking forward to watching the Netflix series and one who likes strategy games. I also only played a selected battle within the game and, frankly, it was a 'best example'.

When I previewed the game I wrote the lines "I never noticed any glaring flaws or moves that made me think "WHY WOULD YOU DO THAT?!", which is always a nice surprise in a game". The problem is that the more I've played this, the more I've got to the part where I'm thinking that line. What exactly is that? Speed.

During my review of Narcos: Rise of the Cartels I complained about the monumentally stupid decision of only allowing the control of one character per turn. It's a basic of the turn-based tactics genre that the developers got wrong. BonusXP has also got a basic element of the genre wrong here, but it's nowhere near as egregious as Kuju's mistake with Narcos. Here the problem isn't with the number of moves but the speed in which you can take them.

Regularly in a game of this type, when you select a character you can simply click on the square you want to move to, the range already being shown on the grid. If an enemy is in range, you simply click an enemy in range to do your regular attack. It's so simple and it's something that's been standard in this type of game now for close to two decades, if not longer. Here, each and every little thing requires more clicks than a dolphin with Tourette's.

This poorly designed system of having to click through every single button, menu and screen repeatedly also persists through every other aspect of the game, more than just the battles. From changing the inventory and equipment of your characters to simply moving through different menus in the game. Having to click through a number of buttons wouldn't bother me too much on the rare occasion, but for what is essentially every little action quickly becomes a "WHY WOULD YOU DO THAT?!" moment.

It's a shame because there are some good ideas to find in The Dark Crystal: Age of Resistance Tactics. The core of battles could be excellent, were it not for their sloth-like speed. You can build your army of resistance fighters out of twelve different jobs, similar to the system found in titles like Final Fantasy Tactics, with your characters also having a second job. Sommelier and brewer sadly weren't jobs made available, but I found that what was available allowed for a great deal of customisation and tactical thinking.

How this works is simple. As you level up, you learn different skills from the two jobs you have chosen for that character. The character can bring in three skills from its first job and three from the second. Since you've learned more than this, you're going to have to decide which skills work best when worked in conjunction with the other members you are taking into battle, made all the more important by the limitations on numbers you can actually take with you into battle.

There is a downside to the number limitation though. That would be rotation, both the necessity on rare occasions and the lack of throughout the rest of the game. Once you've found the set group you prefer, with certain skills that cause strong status effects or just simply do a lot of damage, you're going to be hesitant to change. Only, certain battles will force you to change, leaving you with characters that are very under-levelled. Then it's time for a lot of tedious grinding.

Even when grinding and getting as high as you can, the game will throw elements at you that will require more than brute force. Certain enemies can demolish you in a one-on-one situation, ensuring you need to use a bit of synergy between your units. Also, some maps can feature other elements, such as needing speed due to having a rising water level or ones that require you to have a decent amount of healing due to debuffs in place. This is a good thing as it adds a good amount of variety, also requiring a higher amount of tactical planning.

So the gameplay is, at best, a mixed bag. In reality, the same can be said about the game as a whole. Aesthetically, The Dark Crystal: Age of Resistance Tactics is very much the same. Characters are certainly representative of their TV counterparts, though I can't exactly say they look great. The only aspects that look good are those that would be hard to mess up, the world map and the storyboard-like cutscenes. Everything else just feels a little basic, including battle animations. On the story, whatever you do, don't get it from the game - watch the show on Netflix first. This barely touches more than the very key points, feeling rushed as a result. Also, no voice acting, which contributes to a feeling of lifelessness.

All in all, it's hard to say more about The Dark Crystal: Age of Resistance Tactics than 'it's a game'. It is, indeed, a game. The problem is that it's a sluggish game that hasn't learned anything from decades of progression in the genre it wants to be a part of. There are a few commendable elements and the core gameplay is certainly functional, but that is sadly the best that can be said about the game - it's functionally average. 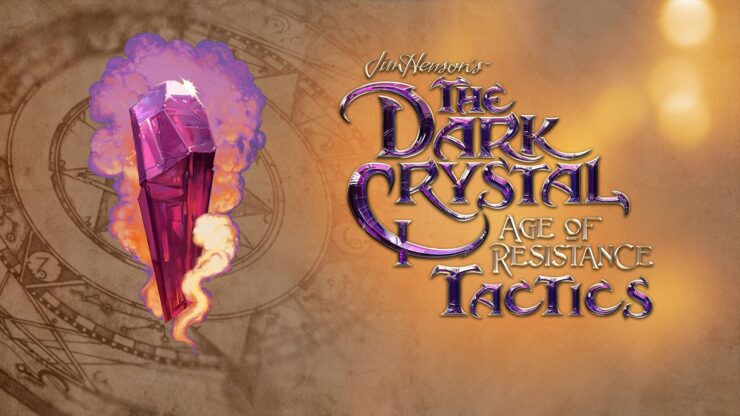 The Dark Crystal: Age of Resistance Tactics is, at its very best, a mediocre game with some decent ideas - these primarily being the character customisation/job system and a few different types of battles thanks to map changes or interesting bosses that require tactical planning. However, any positives are bogged down by the silly decisions like requiring multiple clicks for every single action, even the basics, ignoring decades of turn-based tactics innovation and progression. Add onto this a barely-scraped story and an average, often lifeless, presentation and you have a game that can play well, but mostly plays slow.