Stranger Things 3: The Game Review – Welcome to the Upside-Down

If there's one thing that can be learned from Stranger Things 3, it's that you can have a lot of fun with something that has no qualms in being a pure campy and contrived horror series. Not only that, the same campy and contrived horror series can still be one of the most engaging bits of TV around and really hit you where it hurts when it wants to.

So what about Stranger Things 3: The Game? Well, this is something that had complete access to the script and show and it shows. This isn't a spin-off, it is Stranger Things 3. It covers all of the major and minor plot points, visits all of the locations and even features lines, even those just designed for laughs, from the show. If you haven't seen the show, there are spoilers within. 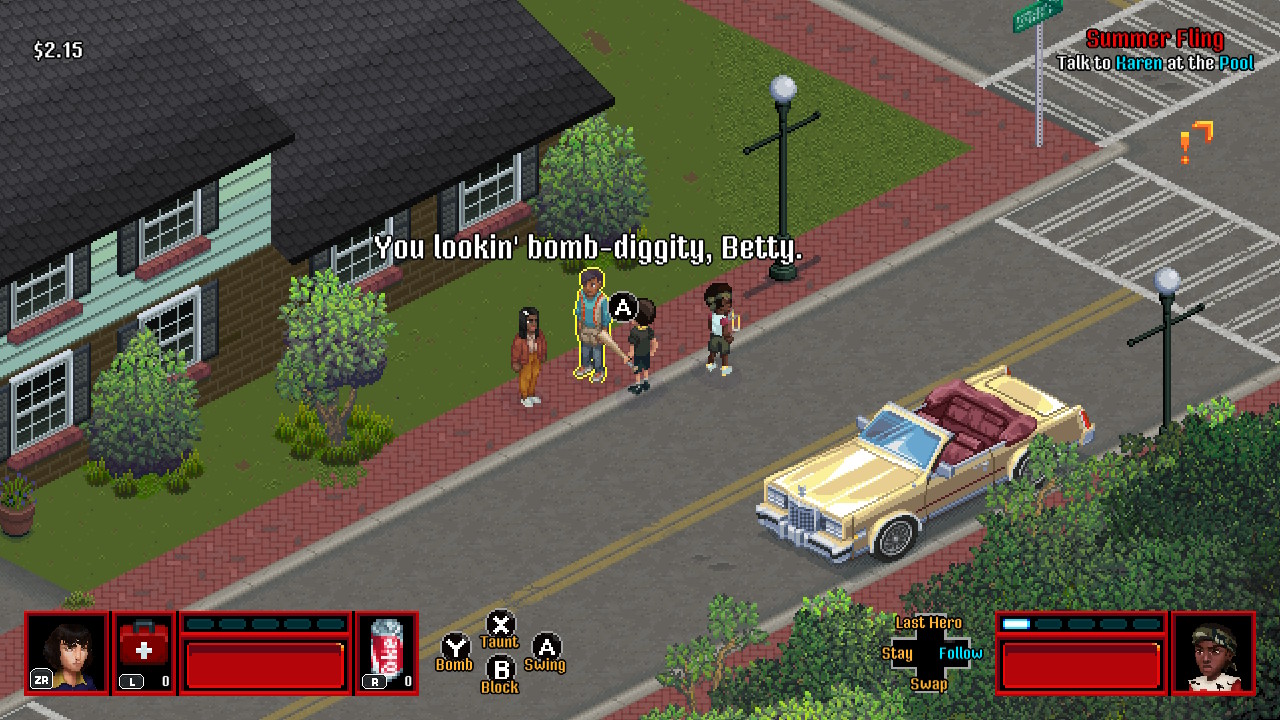 After their success in developing the free Stranger Things game for mobile just prior to Season 2 launching, it only makes sense that Netflix would team up with developers BonusXP again but only this time to make a full-blown title. It is a full game as well, with me having taken literally 10 hours, 3 minutes and 14 seconds to complete my first playthrough of the game. I'm not going to lie and say I enjoyed every second of the game - I didn't. In those ten hours, at least an hour or so was spent backtracking through areas, searching for the answer to a clue or just looking for a god-damned lighter.

I've completed the game, which then lets you wander Hawkins as much as you like, letting you complete any missed side-missions or finish collecting the fifty garden gnomes strewn around Hawkins and its surroundings. I still don't know where to get a lighter though. Why do I want a lighter? Well, that's because Stranger Things has the obligatory crafting system that seems to be in every game now. Granted, here it offers some huge benefits and is pretty damn essential as you move throughout the game. Not all items are created equal though.

That's because crafting body armour that adds an extra 500hp to the party, especially when you have to of them equipped, makes surviving some reasonably challenging events or boss fights that bit easier. The best example of such a fight is just prior to the final battle, where you find yourself swarmed by more enemies than you ever thought possible. Indeed, two times the game threw so much at me that my Switch started to slow down. Think about that, a pixel-art game made the Switch slow down and struggle. That's how much is thrown at you.

Another item, one of the single-craft items that enhance characters, is one that increases the number of fireworks launched by Will when using his attacks. Also, and this is the true saving grace, the item you can craft that increases your movement speed. This, like ones that increase attack power, defence and other areas, comes in three different levels that unlock as you advance throughout the game. I'll get onto why that's such a saving grace in a little while. 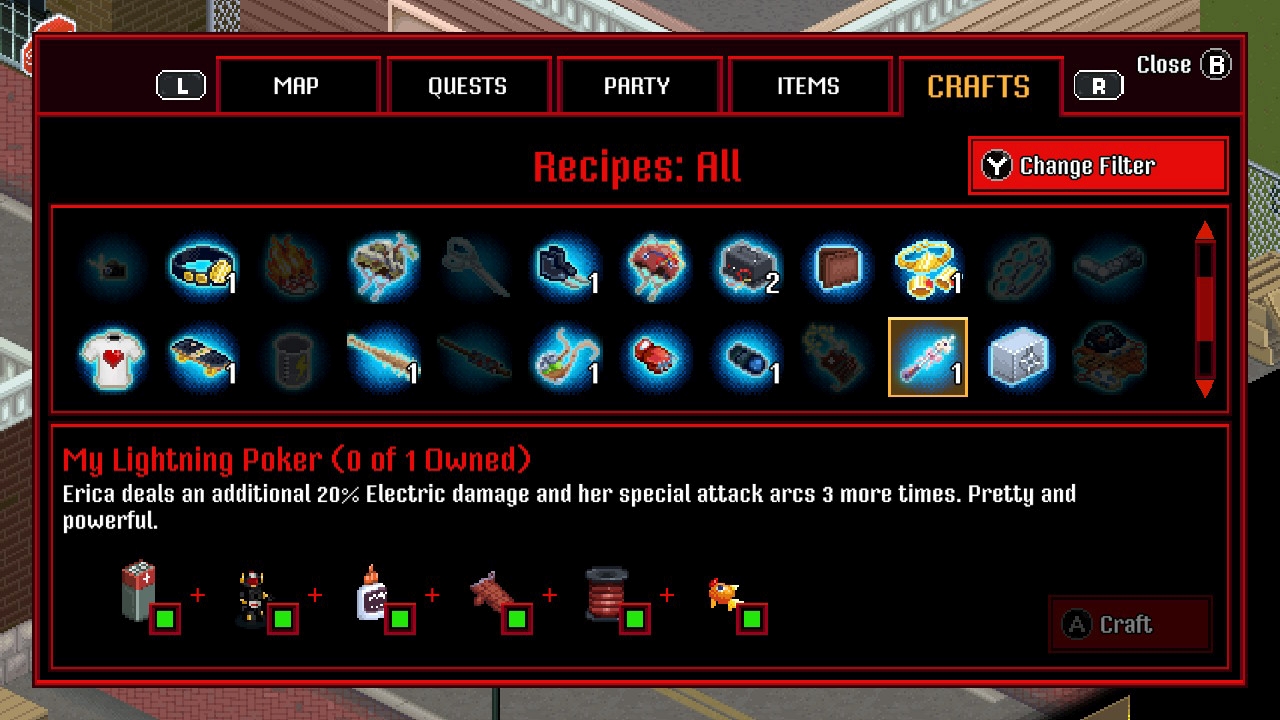 I want to get back to the fighting. The combat system in Stranger Things is very much like a beat-em-up you would have found in the '80s (think Double Dragon). It's pretty fun to be fair, offering an engaging and challenging experience and features ranging from Russian soldiers and violent scientists to angry nurses and exploding rats. Not to mention other things related to our lovely friend, The Mind Flayer.

What tends to be the only issue in combat is that much like the items you can craft, characters are also pretty uneven. Are you using Hopper, Joyce, Nancy, Jonathan or Mike? I'm sorry to tell you, you're playing the game wrong! The only close range characters worth using are Erica because she can stun enemies, or Max because her special ability gives a good amount of healing to the party. That leaves five characters left, these are the ones you'll be using. Will is overpowered as hell, launching fireworks to the other end of the screen - you can kill most enemies before they get to you. Eleven, Dustin, Billy and Lucas all have ranged attacks too, but you've already got Will.

Fortunately, the game does allow you to use any character you've unlocked at any time. For that matter, the very last fight in the game forces you into using two specific characters. While I understand this for story reasons (if you've seen Stranger Things, you'll know why and what happens), it never limits you to the specific characters at other story specific moments elsewhere in the game. It's convenient, but it does detract from the story when you're reading the voice of Joyce, Hop, Max, L or any other the other eleven characters through Will.

Granted, this is essential because specific characters have abilities to unlock areas of each map. Joyce has bolt cutters to cut bolts, Erica can crawl through vents and Dustin can hack keypads. You need them for access to different areas, so they're needed. The little mini-games are easy enough to complete, just requiring a bit of speed on the keys.

The mix-up of lines doesn't really matter though. If you've seen the show, you know the story. If you haven't, you shouldn't be playing the game yet. This doesn't have the emotional impact of the show, it never was going to have. It does carry over some comical moments well and even has its own cringe-worthy lines, particularly those by one-liner NPC's that fit perfectly with the setting. That's the core thing to remember with Stranger Things the show, and the game. 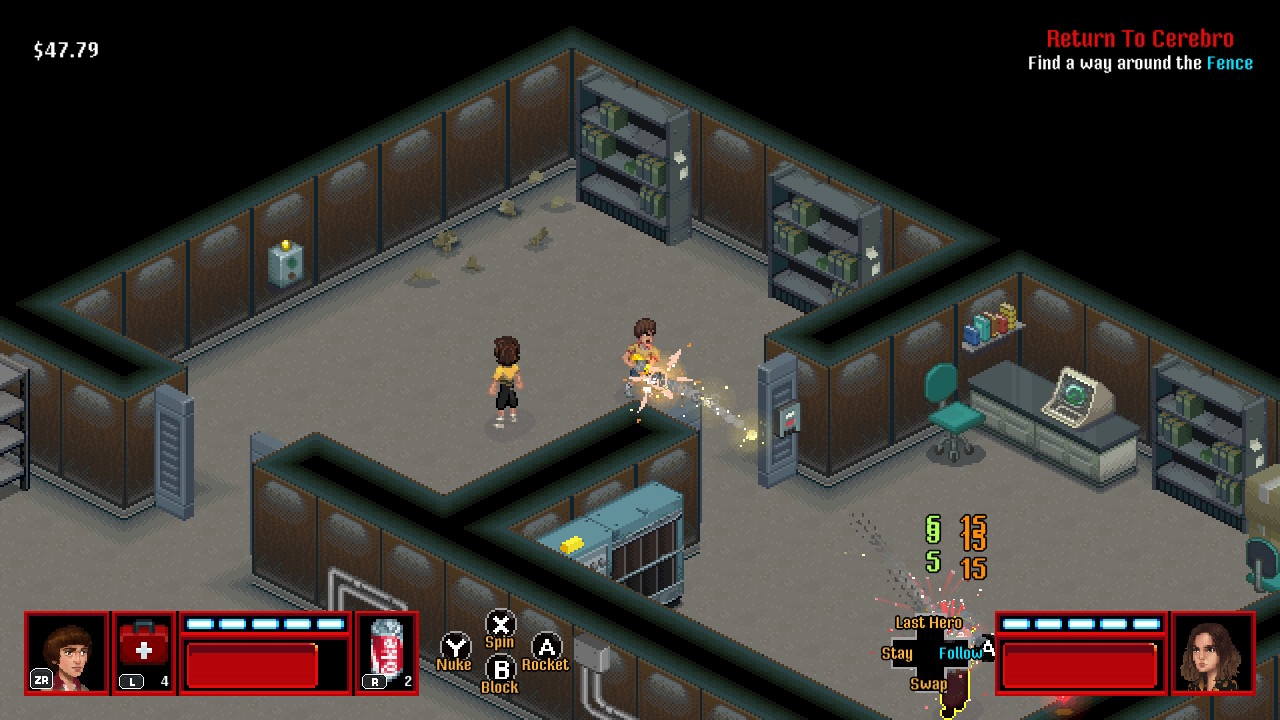 This is the 80's so you've got mullets, techno music and a complete and utter lack of the internet. You've also got brilliant lines about how things are rad or tubular, maybe you're telling somebody to bounce or whatever else people said back then. It makes me want to watch more of the series or watch Breakfast Club again. The game also evokes the setting and era by looking similar to games from that time period too, though fortunately keeping modern sensibilities like controls that actually function.

Everything is so well made, from Starcourt Mall to downtown Hawkins and even Murray's hideout. It all manages to bring the world of Stranger Things to life in a way that I wasn't sure it would have when I first started playing the game. It also helps that the game doesn't fix all dialogue to text-boxes, old-school RPG style. You've got floating lines popping up at times, giving you a bit more story or direction without getting in the way or impeding the game.

What also helps is that there's a fair amount of side-content. There are quite a few side-quests and hidden areas to explore, letting you get more money to spend in the shops. There's also the aforementioned fifty garden gnomes, of which I'm stuck at forty-three. The only real downside is that you're going to be doing a fair amount of back-tracking and, frankly, some tedious traipsing through samey corridors.

The one single time I actually got annoyed at the game is when it had me running through a number of copy-pasted corridors and the characters themselves actually made a comment about how they all look the same and asking how long it would take. YES, I KNOW GAME, THIS IS BORING. Don't take a bloody shot at yourself for being interminably boring at this one point because it isn't funny, it's just drawing more attention to it. Especially because as you get further into the eight chapters you encounter an increasing amount of the tedious samey corridors. At least the puzzles in the game are easy enough to solve by exploring your surroundings and engaging your brain. 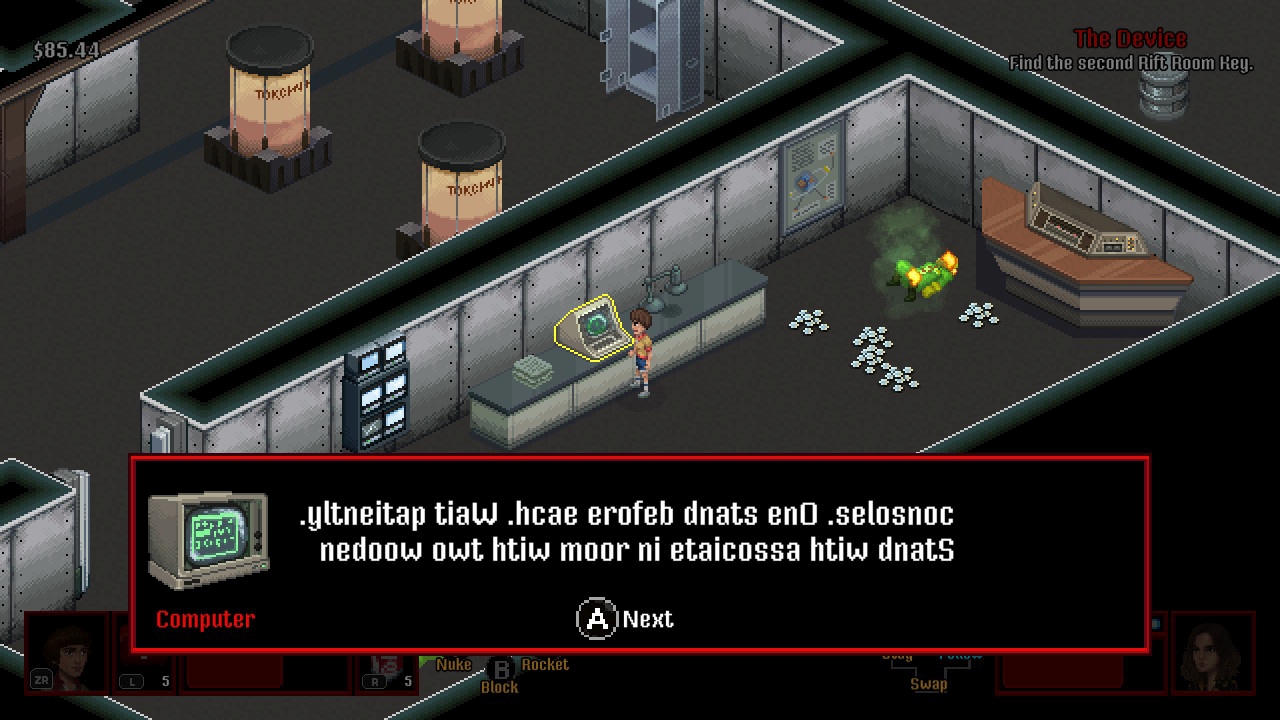 As I've said, this is inspired from titles from the '80s and '90s but you're getting a fair amount of extra detail here. The characters look good and some of the enemies and settings genuinely look gruesome. You're following dried, or sometimes fresh, blood trails. You're seeing the gore and trails left over from horrible creatures. All of this is backed up by a pretty damn good soundtrack as well, with the main theme of Stranger Things taken from the show.

Whether Stranger Things 3: The Game is for you depends very much on if you like Stranger Things. If you do, then yes, this is the game for you and you have already watched the third season, so it's all going to be familiar enough and will draw you in. For those who aren't, well honestly you'll probably not like it. You won't have the backstory, the story or an understanding of the characters, their relationships and even the town itself.

From a pure gameplay perspective, Stranger Things 3: The Game has a decent amount going for it. It's not perfect by any means, but it's a fun, charming and genuinely enjoyable experience. There are negatives, like the fact that it's essential to have knowledge of the series, as well as too much backtracking and a little too much tedious traipsing through identical areas towards the end. Still, for the lower price point (roughly £16 on the Switch, Steam and Xbox. Strangely, £25 on PSN), you could do a lot worse. Just don't buy it on the PS4.

Stranger Things 3: The Game is a decent throw-back to older titles and a strong tie-in to the current third season to the show. Being a game version of the third season, you need to have prior knowledge of the show, its events and characters otherwise it'll be lost on you. Beyond this, the game has a nostalgic feel with charming retro visuals and beat-em-up combat, combined with modern sensibilities like making the areas of Stranger Things explorable, with a decent amount of content thrown in to give the game a decent amount of gameplay value. The only major issue is that towards the end of the game there's too much repetition. Still, for the smaller price, it's more than worth it for fans of the series.