As I leapt through the open window, I had the sudden thought that I should feel like a trespasser here. Its the middle of the night but I’m now standing in the darkness of a strangers kitchen. I wondered how I would feel if I found out random teenagers had snuck through my house each night, and reminded myself to check the windows before going to sleep. But those thoughts evaporated when The Shape came crashing in through the front door. Next thing I knew I was screaming through the backyards, alerting every Sleeper and Lucid around me, and hoping to make it back to the Blackout Club base before anything caught me.

The Blackout Club is a four-player cooperative horror game that has you take the role of nosy teenagers trying to uncover a strange mystery in the town of Redacre. Think Stranger Things, not Scooby Doo though. While there are people hiding under sheets, they aren’t pretending to be ghosts. There’s actually a lot of interesting inspirations for Blackout Club, even though the story itself isn’t very strong.

There is a presence in the town that seems to dominate the minds of the citizens as they sleep that feels more than a little Lovecraftian. Beneath their homes are a vast network of tunnels and structures that the people are made to build each night that really does feel like something from Stranger Things. And then there is The Shape, an unstoppable entity that arrives through Red Doors to hunt anyone that commits too many sins. And despite the fact it can only be seen if you close your eyes, I could picture it being good friends with Pennywise and some of Stephen Kings other nightmares.

All of these inspirations come together in Blackout Club to create intense short bursts of play that can be enjoyed time and time again. Players are given a random objective at the start of the mission that often involves spelunking into the monstrous cave system, breaking into houses and disrupting the plans of whatever is controlling the people. While the general layout of the map stays consistent playthrough to playthrough, the objectives, enemies and everything inside the walls tends to move around.

Long game sessions can drag on a little, but each mission is no longer than twenty minutes and a couple of them will give you all the thrills and chills you want. A lot of the tension of the game comes from the mostly nonviolent game style. Because the Sleepers could be one of the club members parents, engaging them is strictly nonlethal. And because you’re all teenagers, it can be a bit tricky overpowering a fully grown, hypnotised adult. This leaves you sneaking around, using some distraction tools you can find, and running away.

Of course, there is a final option of jumping on the back of your foes and pinning them down, but that counts as a sin. Accrue enough naughty points, and The Shape wakes up. Its potential arrival makes you think twice on every decision you make, adding an extra layer of tension to the game. The Shape is the closest thing Blackout Club has to a boss, and it's wonderfully designed. You have to close your (in-game) eyes to see it, making it impossible to see any of the corporal threats around, and the sound design is just wonderful. As it approaches you can hear its footfalls which sound like someone breathing heavily into plasterboard. It's unnatural and guaranteed to make the hairs on the back of your head stand up.

In coop mode, the feel of the game makes it so much fun to get yourself a little hyped up, yelping and whispering to your party as the mission naturally begins to unravel. Running lose through the underground while your teammates are slowly getting picked off by The Shape is as delightfully exciting as it is tense. The Blackout Club even offers an extra supernatural effect, where it records your voice and uses it against you during missions. Brilliant idea, but we could never tell if it worked. One time a partner in crime was asking The Shape questions, and it might have been answering, but it's hard to say.

The Blackout Club can appear surprisingly forgiving in coop mode, but it's still remarkably easy to lose completely. Teens caught by the Shape become hypnotised and have to be woken up by a teammate. If everyone is caught, it's game over. Get hypnotised too many times and it's lights out, permanently. Teens can also be dragged through the ominous Red Doors if they get too wounded to fight back, removing them from the game.

Single player is much more tense, as you don’t have anyone around to help you out if it all goes wrong. But at the same time, The Blackout Club is a game filled with small moments you want to share with your friends. Playing on your own might be technically scarier but in truth, it's easier to get unnerved with your friends around to scare you more.

Unfortunately, the game does start to feel a little repetitive after a while. For now, there are only three locations. The first is a street, the second is a little bit more of a street, and the third requires some serious playtime to unlock. But that isn’t the real reason it gets a little stale. Like all horror games, a little too much time spent with them removes the thrills. The surprise visits from The Shapes, the wayward torch of a Lucid, or even just some weird structure in the maze, they all lose some of the scariness the more you see them.

And once you start to learn tricks that can outcome some enemies, they get less worrisome again. It's a shame, but it feels like an unavoidable problem for the genre. Hopefully, new additions as the game goes on will revive any lost excitement and fear factor. Leaving it alone for a few days can probably help, too.

There’s a couple of other small issues. The character design for the enemies is fantastic and spooky, with chaotic dialogue, strange costumes, and a disconcerting walk, while the character design for the children is a little less inspired. Sometimes, when creeping through a dark house, the scariest thing you can come across is your friends with their identical hair and weirdly angular wrists.

Reviewed on PC (Steam). Also available on PlayStation 4 and Xbox One. 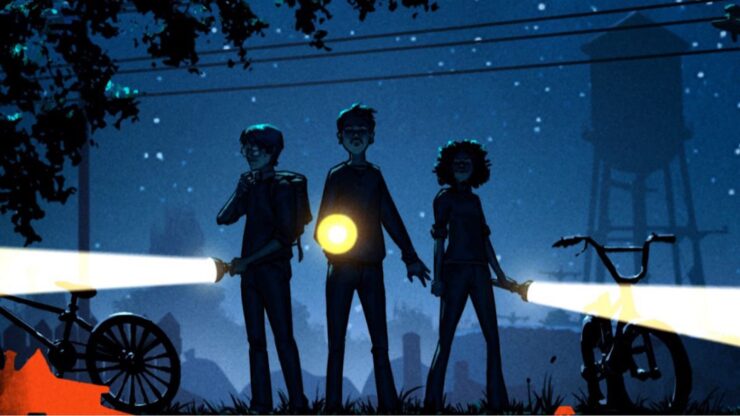 Pace yourself in the Blackout Club and it can be a fantastic game for a long time. From its various enemies and threats to its sinister suburban setting, the game feels great to play with friends, just as long as you don't spend too much time with it at once.