I’m not sure I should be the one to review Tell Me Why. I’ve been a fan of DONTNOD since Remember Me, played all their games, devoured all their stories. You can find the catalogue of my thoughts of most of the Life is Strange games here. But I don’t know if I should be the one to review Tell Me Why. Don’t get me wrong, I loved this game, and I feel comfortable lavishing it with praise and critiquing the parts that I found to be a misstep, and I guess I will for the next thousand words or so. But the central aspect of Tell Me Why is what I do not feel fully equipped to critique. DONTNOD games succeed or fail on their ability to make the audience empathize with the characters, whether they be young women trying to reconnect with their friend, or young men trying to find a place they can feel safe. We can all relate to those stories, find a piece of ourselves in the way they speak or the way they act. Tell Me Why does this incredibly well, and I think it can help people understand and empathize with a marginalized and often oppressed group they might not have been able to before, but whether they have managed to tell a story about them correctly is something I cannot simply answer.

Tell Me Why is a coming home story at its heart, which the devs at DONTNOD handle incredibly well. Playing as twins who have been separated for years and are now forced to return to their childhood home, this is a game that feels more voyeurism than the other games in DONTNOD's catalogue. There is a mystery for the player to investigate, secrets to uncover and a past to confront, but oftentimes this is not the primary driving force of the characters. Instead, you’ll be learning about the relationships and emotions of the twins, and the rest of the tiny town of Delos Crossing. This voyeurism comes from listening in to conversations of the most intimate nature, acted and scripted incredibly well. As you explore the town and the house again, you’ll get a real sense of personal history, of moments of joy and heartbreak. Because a lot of these scenes are nothing but memories, you do get the sense of being an observer rather than a participant some of the time, but it works incredibly well given the story being told.

One of the twins is a trans man. It's obviously an important part of the story given his return to the town that knew him before his transition. DONTNOD hired consultants to make sure they have handled the topic appropriately, but it's not my place to say whether they succeeded. I will say though that I found his characterization interesting, thoughtful and nuanced, and the game makes sure not to fall down any stereotypical pitfalls.

I don’t want to spoil anything here, so I won’t. Tell Me Why is about confronting your past, questioning your memories and accepting that people change. As you swap between the two twins, you can either fight this, or recognise that it will happen either way. Neither option is painless or easy to choose, but you’ll still have to decide. Outside of the conversations that make up the heart of the game, you’ll also be solving some puzzles and investigating the area. Tell Me Why is possibly the least hand holding DONTNOD game to date, with you often left to work out what the puzzle is asking you as well as finding the answer. That being said, the puzzles still aren’t too difficult, and sometimes feel added for the sake of it, rather than anything else. One example is when you’re searching for a gravestone and have to identify the correct one by the memories you and your twin have of seeing it last.

While it might be said that DONTNOD is becoming the studio renowned for its narrative adventures, the studio should be known for its magical realism. That often ill-defined genre that includes magic in the mundane is hardly touched by other studios, yet DONTNOD seems to have mastered it with magical systems that make up most of the puzzles and mechanics in their games. Tell Me Why is no different, with the twins having the power to communicate telepathically as well project their memories of the past to each other. This latter power has some incredibly interesting and powerful uses as the pair confront the past. Much like our memories, the projected ones are prone to bias and alteration of the years. The twins will often disagree with each other’s version of events, and it's up to the player to choose which memory they should hold as canon. It's not a puzzle you can get right or wrong, but choosing one memory over another will affect the way the twins see and interact with the focus of the memory.

DONTNOD is also becoming exceptionally gifted at creating an almost perfectly toned quiet American Town. Although it's probably not accurate in a literal sense, all the towns you find in their narrative adventures feel right. The close-knit community full of secrets, the wide-open spaces, the physical and emotional struggle to evolve and keep up with a world that decries the simplicity of the small town life. Delos Crossing is like the others, this time set in the Alaskan autumn as the town begins to hunker down for the cold winter ahead. The visuals of Tell Me Why are more realistic than the Life is Strange series, although they are still shooting for a heightened design over photorealism. And it looks amazing, too. Most of the scenes take place beneath an incredible view of the mountains or the rapidly slowing water. The less natural areas are also handled well. Returning to the home in episode 1 gives you the sense this was a lived-in space. Although you’ll find collectibles and important information in the usual spots, the scenery and sense of a place still feel alive.

However, I think a lot of people might struggle with the pacing of the Tell Me Why compared to other DONTNOD games. As I said earlier there is a mystery, but it doesn’t really come into focus until the end of episode one and is often not as important to the game as the main characters are. It's hard not to be engrossed in their lives, but compared to the search for Rachel Amber or the nomadic journey to the border, it feels a bit slow and disjointed at times.

Episode One serves as an introduction to the characters rather than the world. It forces you to sit with the twins and explore their feelings for the past, the town and each other over everything else. This works really well as you swap between them through the narrative, letting you decide how they might act and seeing both perspectives as you reintroduce yourself. But throughout most of Episode One, what feels like should be the central mystery of the game has been solved, or doesn’t even exist. It's about you thinking the twins are coming to terms with it, rather resolving it themselves. Episode Two is more confrontational as they start to grapple with the things they’ve tried to suppress, as well as investigate some things that might not have been as resolved as others. I won’t say what happens in Episode Three to avoid any spoilers, of course.

Each episode of Tell Me Why is set to release a week apart starting today, which is fantastic for the fans and the story, especially given the difficulty of staying emotionally invested in DONTNOD's earlier titles with months passing between each of the releases. Each episode is somewhere between two and four hours long, so the endings give you a nice sense of closure and a chance to take a break from the story.

Tell Me Why feels like an evolution for the studio. Although they continue to demonstrate great skill in portraying challenging topics with empathy and thoughtfulness, there is something else here. Maybe it's just that the central characters are older than the studio's usual focus, but Tell Me Why feels more mature. As to whether the game handles Tyler and his story correctly, you’ll have to go out and find another critique will more experience and knowledge on that particular subject than me. 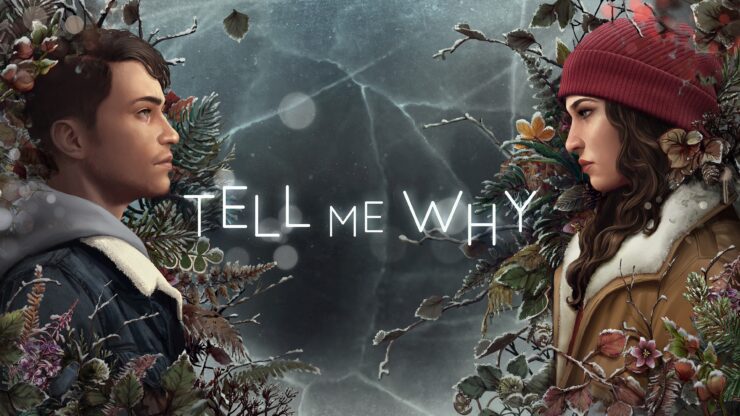 9
Wccftech Rating
Tell Me Why

Tell Me Why uses everything it can to get you invested. The puzzles are creative and often use the game's systems in a way you might not expect, while the characters are incredibly interesting and the story is powerful.