Syberia - The World Before

The Syberia series may not be among the most popular adventure game series nowadays, but the world and characters created by Benoit Sokal still have a place in the heart of all that experienced the first two classic entries in the series.

Years after Syberia 2 launched, the series did make a return with Syberia 3 in 2017, which attempted to introduce a younger generation of players to the series' unique world and main character Kate Walker but the game was far from being the comeback that the series deserved, as it wasn't just a bad Syberia game, but a bad adventure game in general. Definitely not the right way to treat such a beloved franchise, and not a proper way to end Kate Walker's adventures.

Almost five years since the release of Syberia 3, Microids is attempting to properly honor the series, and the memory of creator Benoit Sokal, who passed away last year, with Syberia - The World Before. And right from the start, it is clear that the game is heaps and bounds ahead of the third entry in the series, featuring an adventure game experience that is generally solid, although not particularly innovative.

Syberia - The World Before is the first entry in the series to feature two different main characters: series' main protagonist Kate Walker and Dana Roze, a 17 years old aspiring pianist who lived in Vaghen in 1937 whose life will be forever changed by the fascist threat of the Brown Shadow on the onset of the Second World War. Things don't go much better for Kate Walker, who has been imprisoned in a salt mine at the end of the previous game and is now forced to work there as a slave.

Kate, however, doesn't stay imprisoned for long after the adventure begins. Taking advantage of an opportunity that emerged while working in the mines, Kate manages to escape, but at a high cost, while discovering a painting of Dana, who looks just like her. Determined to discover who the young girl in the picture is, Kate travels to Vaghen, not fully prepared for the discoveries she will make in the heart of Europe.

Syberia - The World Before's story is definitely among the game's best features. Explaining precisely why is a little difficult without making some heavy spoilers, but suffice to say that the dual timelines system works incredibly well from a narrative point of view, often blending together in a very cinematic way, and the whole mystery surrounding Dana's relation to Kate is presented in a very engaging way that leaves players hungering for more. Characters are generally well-realized as well, and the return of Oscar is definitely welcome. Even more so, considering how the game's tone is quite somber, and far from the more lighthearted one seen in the classic games. It does make sense, both for narrative reasons and for the game being a tribute to the departed creator, but it does feel a little off.

While the story is definitely one of Syberia - The World Before's strong points, the gameplay is nothing to write home about. It is functional, that's for sure, but it really doesn't attempt to do something different from the countless modern adventure games out there. When controlling either Kate or Dana, players can explore a variety of linear locations, talk with NPCs, interact with a variety of different objects, both story related and optional, and solve puzzles. Solving puzzles involves not only using required items but also performing actions with some simple quick-time events. Puzzles come with a varying degree of complexity, with some found in the late parts of the game that can be a little challenging. The game, however, features an optional hint system that can help the player solve any puzzle, so they won't be stuck forever on a single puzzle. A great feature to have if one is mostly interested in following the story and getting to its end.

While Syberia - The World Before is mostly a linear affair, the game often allows players to complete some optional objectives that do provide some additional details on Syberia's world and the characters that live in it. These side objectives are almost integrated into the main adventure, so completing them feels somewhat natural. They can also be ignored completely without repercussion, so, again, players can just focus on completing the story if they so desire.

As you can tell at this point, Syberia - The World Before is quite faithful to the best entries in the series when it comes to gameplay, but this is also, in my opinion, its greatest weakness. The experience works well, something that couldn't be said for Syberia 3, and it is enjoyable enough, but the developer played it too safe in my opinion. Sure, it has been modernized a bit, but not enough to make the game a masterpiece. Adventure games have moved forward quite a bit since the days of the first two Syberia games, and I would have loved to see a different approach for the fourth entry in the franchise. With adventure games like Sherlock Holmes: Chapter One out, Syberia - The World Before definitely needed something more.

When it comes to presentation, Syberia - The World Before definitely delivers. The game has a great atmosphere that is enhanced by the wise usage of lighting, although there are some visual glitches with shadows that do ruin immersion a bit. Locations and characters are detailed enough, and animations are generally decent, but they are not complex as those seen in bigger AAA productions. The game also seems to have some optimization issues, as the framerate varied wildly on the machine used for the test (i7-10700 CPU, RTX 3070 GPU, and 16 GB RAM) at 4K resolution. This isn't a huge problem for a point-and-click adventure game, but it does get annoying from time to time getting from 120 FPS to 40 for no apparent reason.

The Syberia - The World Before atmosphere is further enhanced by the great care that has been placed in sound production. Voice acting is solid all around, with Sharon Mann returning to voice Kate Walker to give a better sense of continuity, and so is the soundtrack, which has been composed by Inon Zur, who worked on the Syberia 3 soundtrack as well as on the Fallout 4 and Dragon Age: Origins soundtracks.

Syberia - The World Before is, without a doubt, a return to form for the series, presenting a solid adventure game experience powered by an engaging story, charming characters, and well-designed puzzles, a far cry from those of Syberia 3. The game is unfortunately not that innovative, featuring a slightly more modern take of classic adventure games features that do work well but are not enough to make the latest entry in the beloved series a must-have for all sorts of players. 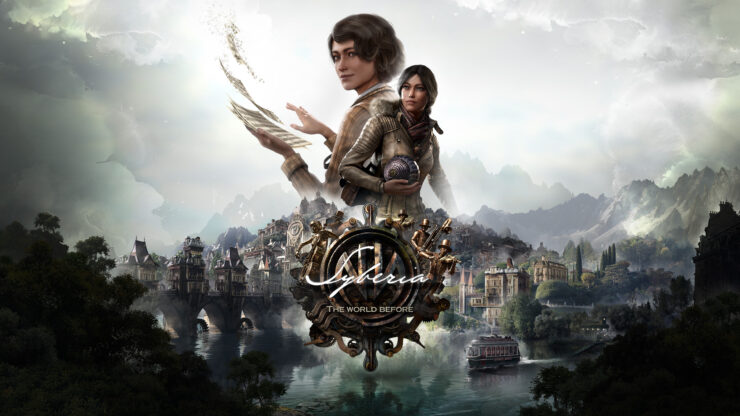 7.5
Wccftech Rating
Syberia - The World Before

Syberia - The World Before is a return to form for the series, and an all-around solid adventure game featuring an engaging story that nicely blends together two different timelines, charming characters and good puzzle design. The experience, however, leaves something to be desired when it comes to innovation, making the game a must-buy only for fans of the series.

Asterix & Obelix XXXL: The Ram From Hibernia Due This Fall on PC and Consoles